Kirk Gibbs Charges To Home Round Victory at Murray Bridge 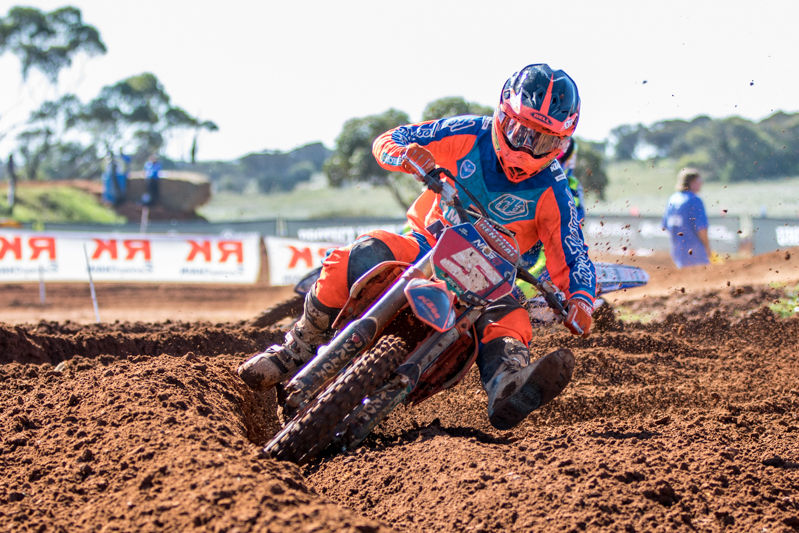 KTM Motocross Racing Team‰Ûªs Kirk Gibbs has recorded a satisfying finish to his home round outing today, taking the top step on the Monster MX1 podium and further extending his championship lead.

With friends and family looking on, Gibbs was determined to get the job done from the minute bikes hit the track, however with NPS Monster Energy Kawaski‰Ûªs Adam Monea finally finding his form, the job was not to be easy.

In moto one, KTM‰Ûªs Kirk Gibbs took the holeshot and only gave up the lead to Daniel Reardon for a few turns on lap one, showcasing his talent to his home crowd supporters.

With Gibbs in the lead for the majority of the moto, all eyes were on CDR Yamaha teammates Dan Reardon and Kade Mosig (CDR Yamaha) who had commenced their battle for second. With an incident at round three in the back of their minds, Mosig managed to make a clean pass on teammate Reardon, handing CDR Yamaha second and third for race one.

In moto two, Gibbs once again took the holeshot and early race lead. However with Monea looking to turn his season around, he hunted Gibbs down and took the lead ‰ÛÒ taking control of race two in spectacular fashion.

With Monea‰Ûªs Kawasaki machine crossing the line first, Gibbs followed comfortably in second, while third place for race two was claimed by CDR Yamaha‰Ûªs Daniel Reardon, in a satisfying outing for the former retiree.

When racing concluded and points were tallied the grin could not be wiped from KTM riders face. Gibbs claiming the home round win for the second year running, and taking top step on the podium ahead on NPS Monster Energy Kawasaki‰Ûªs Adam Monea, followed by CDR Yamaha‰Ûªs Daniel Reardon in third.

‰ÛÏI got two really good starts today which I‰Ûªm really happy about, and I felt very comfortable out there all day," he said. ‰ÛÏAdam was riding very well in that second race, and I made a couple of small mistakes but all in all I can‰Ûªt ask for much better today.

‰ÛÏBig picture, I‰Ûªm really happy with how everything went today, and it‰Ûªs awesome to be able to get the overall win in front of a home crowd again.‰Û 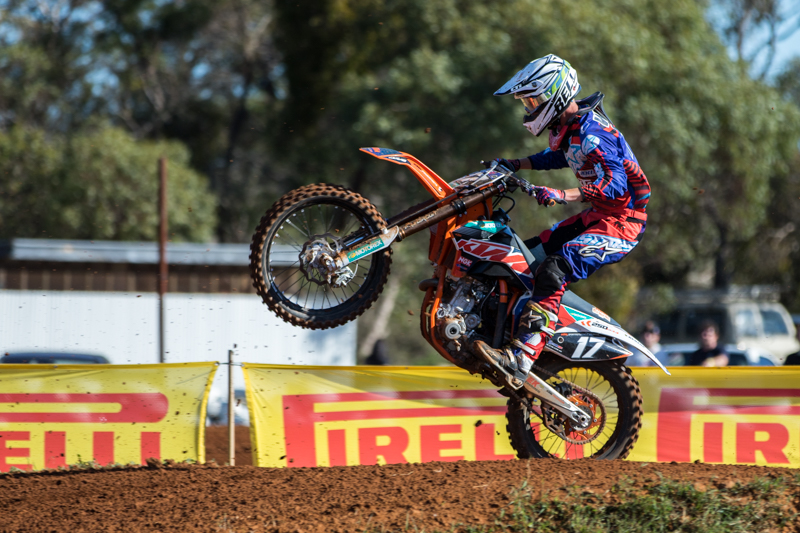 Caleb Ward returned to racing from injury in the best possible fashion winning both MX2 races - Credit: Aaryn Minerds
KTM Australia‰Ûªs Caleb Ward has taken two from two motos, and claimed his first overall win for 2015, in what was a championship-changing day for the Motul MX2 class at Murray Bridge.

Shaken up was the theme for the class at round four, with an epic return to racing for KTM‰Ûªs Ward, a first podium appearance for Luke Arbon (SD3 Husqvarna), while Serco Yamaha‰Ûªs Luke Clout was forced into championship damage control.

Clout, who entered round four with a comfortable championship lead, headed out for MX2 qualifying confident - however a small mistake in the rhythm section before the finish sent the Yamaha rider over the handlebars during qualifying, in a huge upset for Serco Yamaha.

In moto one, KTM‰Ûªs Ward took his return to racing to a whole new level. After grabbing the first hole shot of the day, Ward had no need to look back. Checking out on the entire field, Ward crossed the line in first position, letting the MX2 class know that the young Queenslander is back in business.

For Red plate holder Clout, he was lucky to line up for moto one - however the series points leader managed to circulate for the entire 30 minutes and cross the line in tenth allowing him to continue to defend his championship, despite now nursing an injury.

In moto two, the shake up continued ‰ÛÒ a first turn pile up seeing Serco Yamaha‰Ûªs Jed Beaton go down along with JCR Yamaha‰Ûªs Jay Wilson, putting the championship front runners at the back of the pack.

However all eyes were once again on Arbon and Ward who went head to head for the entire 30 minute moto. Ward eventually passing Arbon for the lead just before the last lap board, was all that was requried in order to collect his first round overall for 2015.

With racing wrapped up, the top step on the podium was deservingly claimed by KTM‰Ûªs Ward, while local Arbon, (SD3 Husqvarna) settled for second ahead of Kawasaki Australia‰Ûªs Takeshi Katsuya in third.

‰ÛÏIt feels awesome to get this win under the belt." Ward said "I‰Ûªve spent a lot of time on the couch with my injury so to come out and get the win first race back is pretty cool.

‰ÛÏI really wanted to show everyone that I have the speed to win races and also that I can ride a four stroke too.

‰ÛÏEveryone has worked really hard to make this happen, so todays win is definitely for all of the people who have supported me to get me here.‰Û