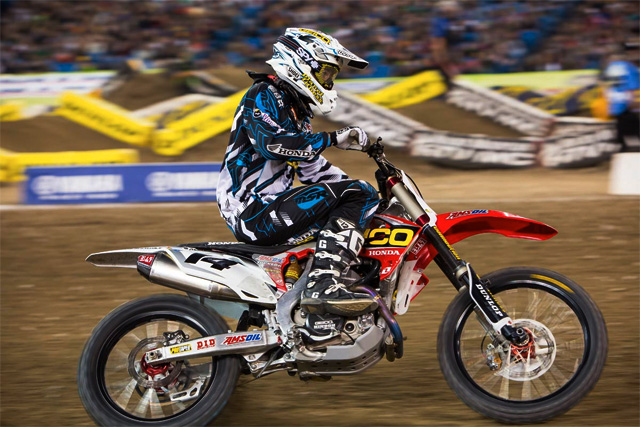 Kevin Windham will miss the remainder of the 2012 Supercross season after suffering several injuries during a crash Saturday in Houston.

Attempting to qualify for the main event, Windham was in a battle with James Stewart during a heat race when he cwent over the bars his CRF450 at a high rate of speed. As a result of the accident, Windham dislocated his right shoulder and sustained damage to his left wrist, left thumb and right hip.

"I've definitely got a dislocated shoulder so that ends my season right there," Windham said. "I've had my wrist examined by two doctors; one said it was broken and the other one said it's not. It's very swollen and black and blue so it's hard for them to tell. I'm going to see another specialist (Tuesday) and have an MRI done to see exactly what's up. We just need get it fixed properly.

"I can't move my left thumb at all and my hip hurts. I'm not really sure what's going on with either of them at the moment. I'm basically hurting all over."


The 34-year-old GEICO Honda rider, the oldest competitor on tour, was having another solid season before his accident. He has two podium finishes to his credit and had been a part of the top five all year.

Earlier this season in Atlanta, Windham started his 200th career SX race, joining only Mike LaRocco in passing that particular mark. Now retired from racing, LaRocco is the team manager for GEICO Honda and works closely with Windham.

"It's disappointing," Windham said. "I've been lucky at avoiding big get-offs like the one I had in Houston for the past several years. Staying healthy has been a big part of my career going this long. But even after this one I'm not done. I'll be back for sure."

Windham had no plans of racing this summer's outdoor Motocross schedule and says no one had made an offer for him to contest that series so he'll concentrate on regaining his health and making another run in 2013.

"A big 'thanks' to all the fans who have Tweeted and left messages on Facebook wishing me well," Windham said. "And to all my friends in the industry that have called or e-mailed. It really means a lot to me and my family.

"I'll be at the New Orleans race and we'll try to get out to Vegas for the finals. I want to stay involved and hang out with the fans as much as possible."

Team co-owner Jeff Majkrzak says no plans have been made at this point to fill Windham's seat at the last four races on the SX schedule.