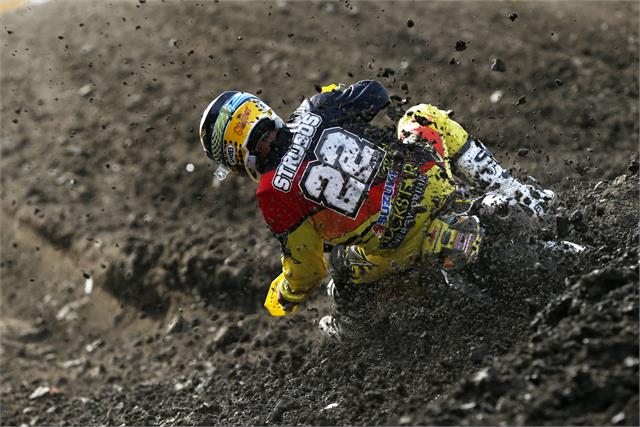 Rockstar Energy Suzuki's Kevin Strijbos raced to an impressive double victory at the final round of the Belgian Masters of Motocross at Mont-Saint-Guibert on Sunday.

His good form from the last couple of weeks in the World MX1 Championship was immediately evident in his first outing of the day; and a holeshot in the qualifying race and a start-to-finish victory was a good way to start the day.

The Mont-Saint-Guibert track is one of the most-impressive in the series, known for a spectacular layout in an active quarry South-East of Brussels. And even though the region saw a lot of rain in the days before the event, the track was in ideal condition for the field of Grand Prix riders to race on.

In the opening race, Strijbos again rounded the first turn in the lead and managed to build-up a comfortable lead on Shaun Simpson (Yamaha). Ken De Dycker (KTM) - who was already crowned as Champion of the series at the last round, was gaining momentum on a 250 two-stroke, but pulled out mid-race before he reached the top three of Simpson and Febvre.

Strijbos was able to control the remainder of the race to take the win.

The second heat was a carbon copy of the first, with another holeshot for Strijbos and Simpson chasing in second. The Belgian was able to create a gap again and control the race to take the overall victory.

"It was a good day which turned out quite easy for me." Strijbos stated. "After taking the holeshots I could just focus on the lap-times in both races.

"I found a good rhythm in which I could create a good gap between me and Shaun and from then on I could control the race. I'm pretty happy to end the season like this!," he concluded.

Top Image: Kevin Strijbos on his way to Victory at the latest round of the Belgian Masters of Motocross
Credit: Suzuki Racing