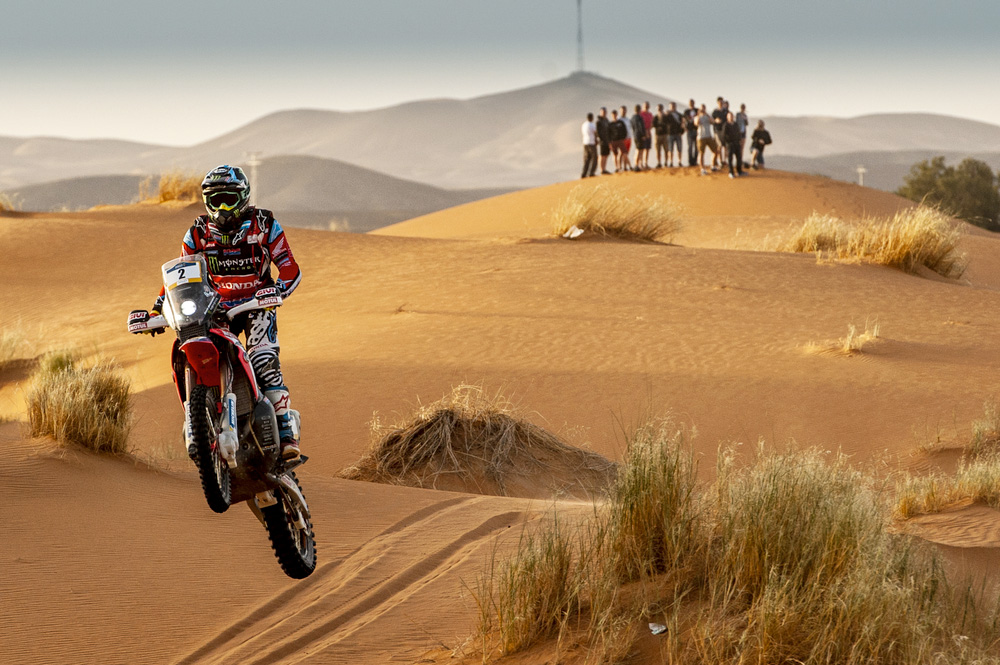 After originally finishing sixth Kevin Benavides was declared winner of stage four after the final section was cancelled du to a number of riders getting lost. Photo: Charly Lopez
Monster Energy Honda Team rider Kevin Benavides has won a controversial stage four of the Merzouga Rally after a tricky day in the dunes that caught many out.

The stage served up a combination of dunes, sands, stony ground and trial-like areas. On the way, riders had to tackle dust-filled Moroccan track and a final section which caused many riders serious navigation problems with the main group riding around in circles in search of an elusive waypoint.

The decision to cancel the final section drawing harsh criticism from some riders and team officials. Australian Toby Price, who was originally credited with second on the stage, was especially critical since the same thing happened to him on stage one but had to suffer the consequences.

"So how is this fair?" Price said in a scathing social media post. "Seriously such a joke, we all had the same roadbook, nobody was at an advantage or disadvantage just like we all had on day 1, plus in rally racing, it‰Ûªs impossible to make a roadbook 100% accurate so why can stuff like this get changed because a few got lost?? Racing will now have protests everyday cause there is always one wrong note in a roadbook!!"

At the end of the day though the amended results stand and with just the final motocross style stage of the Merzouga Rally still to run, Joan Barreda is in a solid position to claim overall victory tomorrow despite finishing eight on today's stage. Benavides is only six minutes behind the Spaniard with Pablo Quintanilla double that. 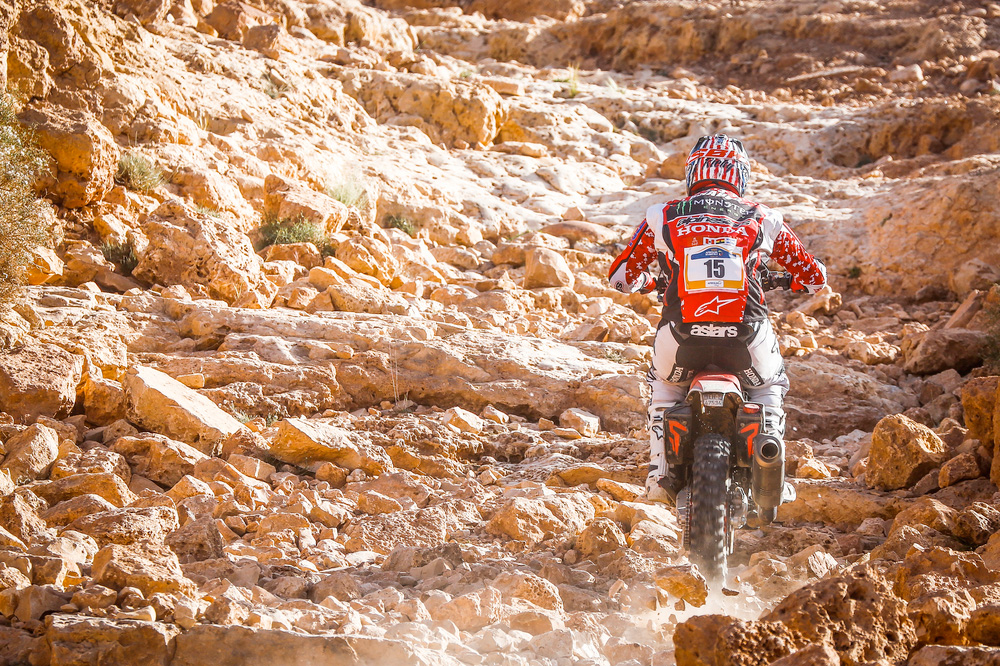 America Ricky Brabec was second on stage, moving himself to fifth in the overall standings with just the motocross style final stage remaining. Photo: Aurelien Vialatte / ASO
Today saw the fourth stage ‰ÛÒ the second leg of the marathon stage ‰ÛÒ in which riders were unable to receive mechanical assistance until they arrived back at the Tombouctou Hotel camp once the 372-kilometre stage had been completed.

Allessandro Botturi, Paulo Goncalves, Ricky Brabec, Toby Price and Laia Sanz where originally credited with the top five placings but when officials canceled the final section they all fell down the order.

Joan Barreda, starting out from first place, was eventually caught by Kevin Benavides, who battled hard throughout the day. The pair rode virtually together until the final waypoint where they were reached by another group of competitors including stage runner-up Ricky Brabec. Barreda finished the day eighth while Benavides was the fastest rider winning his third stage of the rally so far.

"The overall balance of this marathon stage is not bad," Benavides declared. "Yesterday I opened the track all the way, and nobody was able to reach me physically. I had to navigate alone, so that was good. Today I started from behind, caught the riders in front and opened the track for half the stage until the end." 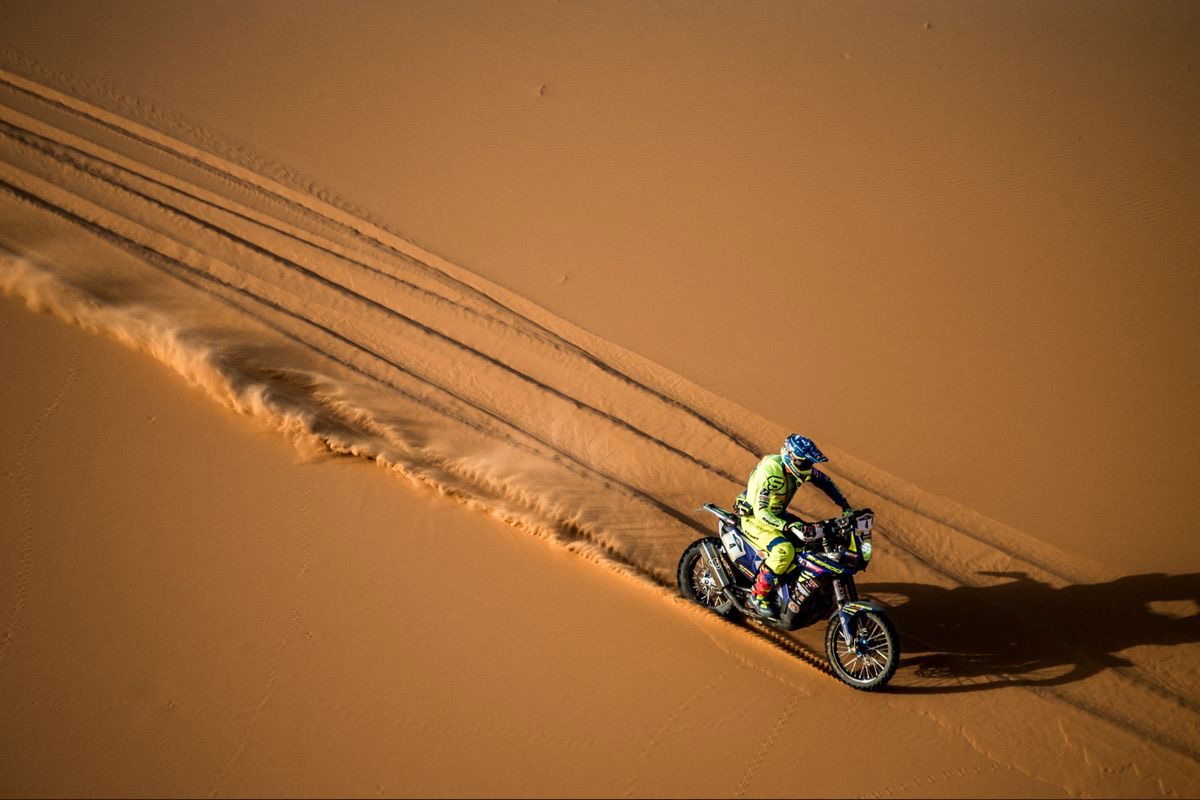 Spaniard Joan Pedrero had an up and down day, crashing and then surprised to find himself third on the stage after the results were amended.
American Ricky Brabec turned out his best performance to date with a second place finish.

"It was a day in which we tried to control the race, but in the end, it was more complicated than usual," Brabec explained. "We had difficulty finding a waypoint seven km from the finish line. We were there, at the point, but it just didn‰Ûªt seem to add up, and we ended up spending forty minutes to find it. Other riders arrived, and in the end, we found the position. We believe there was an error in the roadbook note. We were able to save the day despite losing some time, and we‰Ûªll have to see what happens in the end. Tomorrow is the final day." 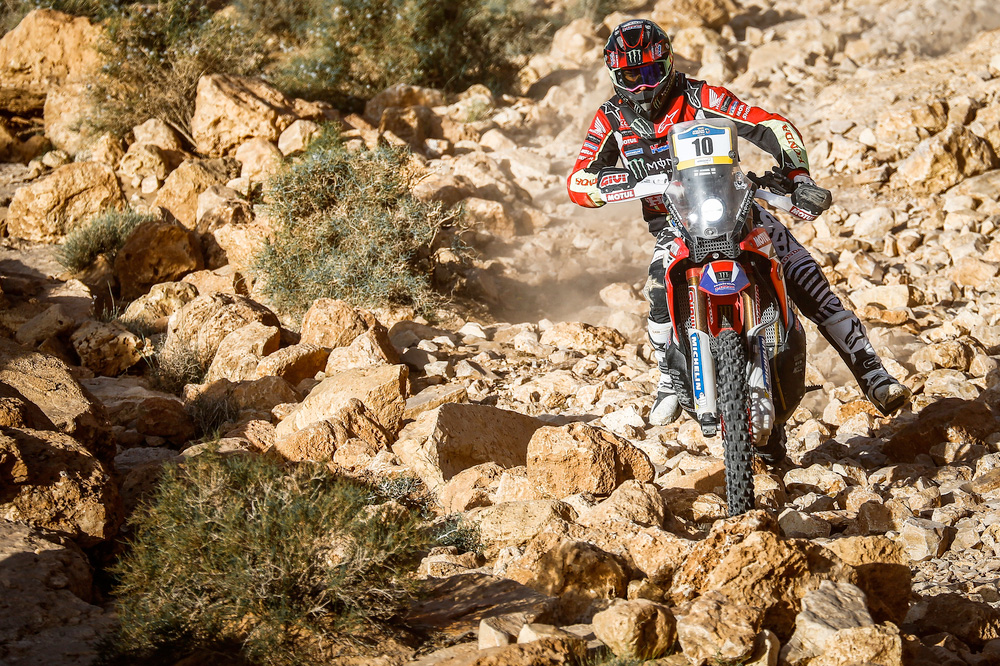 Despite finishing todays stage in eighth, Joan Barreda still holds the overall lead and is a firm favourite for the win with one small stage left to complete. Photo: Aurelien Vialatte / ASO
Joan Pedrero had an up and down day. Starting at a good pace the Spaniard was 2nd at CP2 before suffering a big crash, the stage had many obstacles and proved to be very difficult to navigate. With the crash and other issues, Pedrero was classed in fifteenth place. But after a tough day, good news came through when he was elevated to third when the final section was dropped.

The final stage of this Merzouga Rally will have a motocross style start in line before completing a full loop in the Erg Chebbi. The motorcycle riders will start out after the buggies and quads on a 206.71-kilometre stage, 100% of which will be fought out in the dunes. 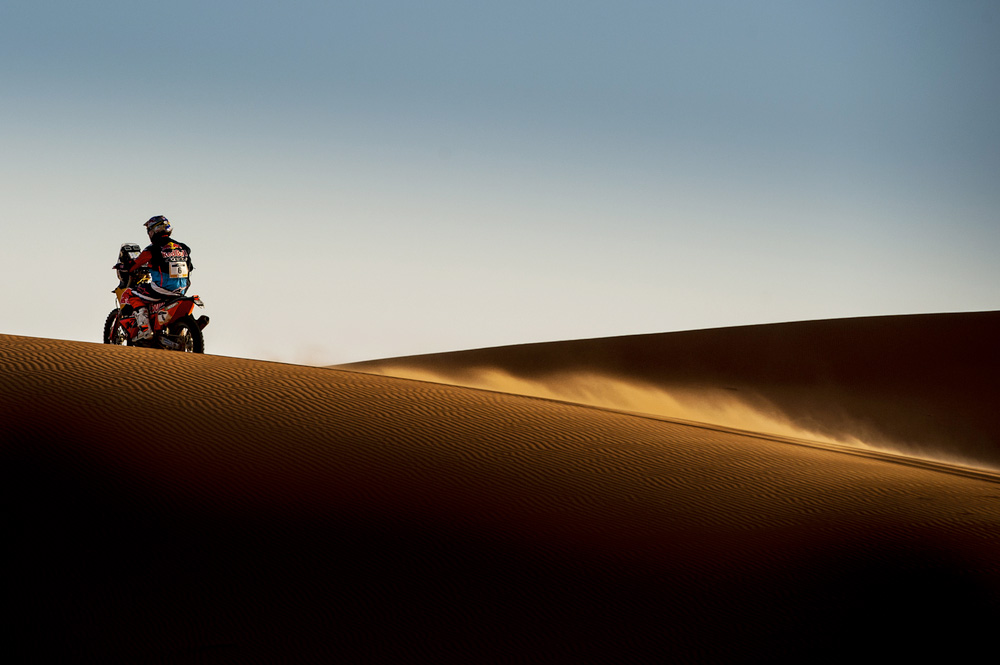