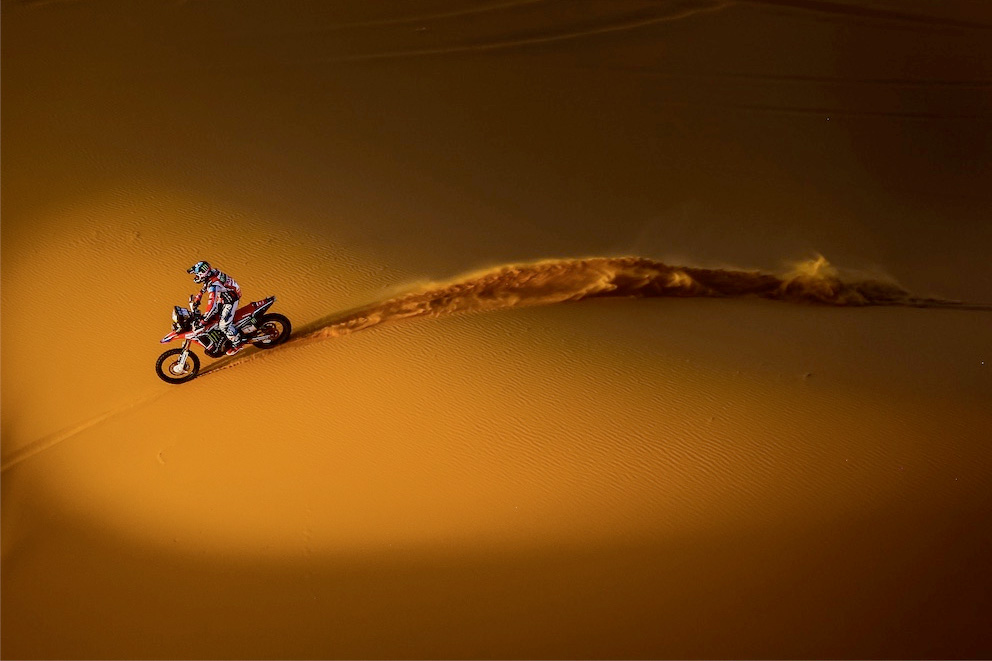 Benavides, who had previously won the prologue, triumphed in an error-free second stage ride and moves up into second place overall, behind team-mate, and opening stage winner, Joan Barreda, as the race arrives at the marathon stage.

Continuing his strong run of form in the Moroccan dunes, defending champion Pablo Quintanilla has secured a strong runner-up result ahead of Australian Toby Price.

Kevin Benavides clinched the third consecutive victory for a Monster Energy Honda Team rider, after taking top spot in the prologue and Barreda‰Ûªs victory in the first full stage.

"I felt very well today, I went out to attack with a great pace," the Argentinean said. "I felt very good about the bike. In the end, I saw the ones in front and over the final kilometres of dunes, I wanted to attack but something made me think about not forcing and not risking to finish the stage safe and sound. I arrived well, I won the special and we are good in the race." 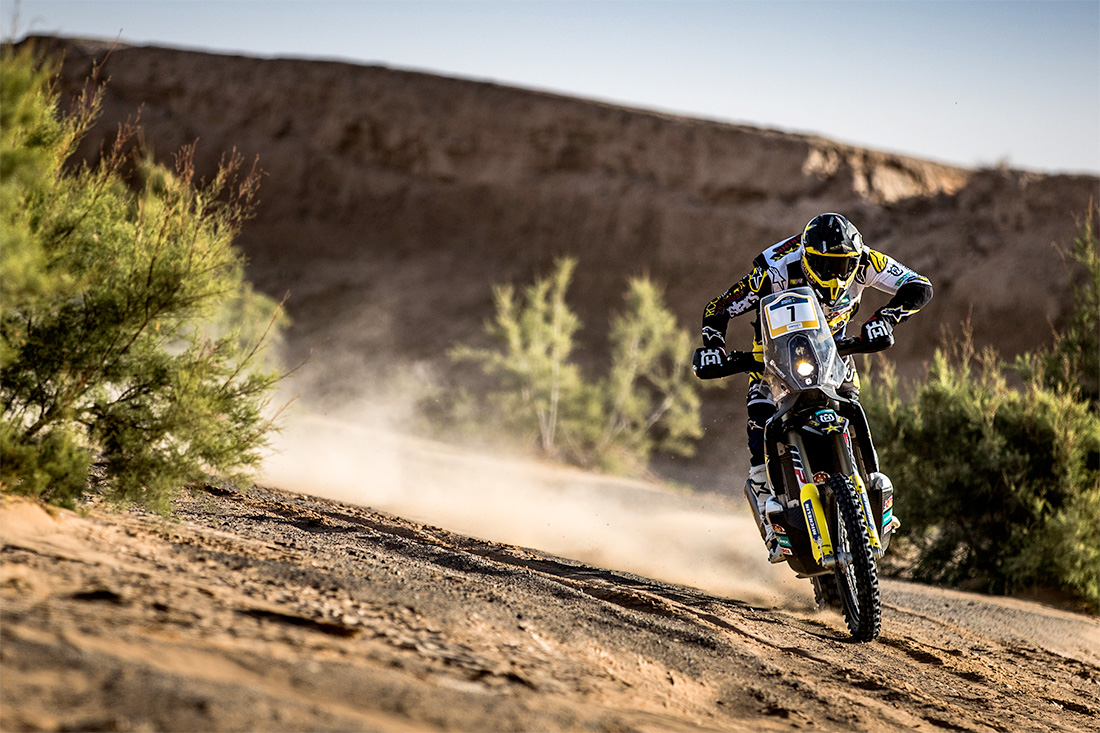 Defending champion Pablo Quintanilla is in a good position after finishing second on stage 2 and in third overall.
Delivering the goods again today in Morocco, Pablo Quintanilla enjoyed a mistake-free timed special. Reaching the leading riders after the halfway leading the group for the remainder of the stage. Securing second for the day, the reigning Cross-Country Rallies World Champion is still in the game for the coveted victory at the event.

‰ÛÏOverall, I feel like I did a really good job today," Quintanilla said. "We had a very early start this morning and in the first dunes it was difficult to see if another rider was in front. Around the 120km mark I caught the leading group of riders and continued to open the tracks for the remainder of the special stage. I made no mistakes and felt fast from start to finish.

"My navigation was also on point and this is crucial in such conditions," Quintanilla continued. "It was a positive day and I‰Ûªm happy for it. Tomorrow we have the marathon stage and we will not get any assistance at the end of the stage. We need to protect our bikes and make sure we avoid any small crashes. I‰Ûªm looking forward to the marathon stage. It won‰Ûªt be easy but I will do my best to enjoy it.‰Û 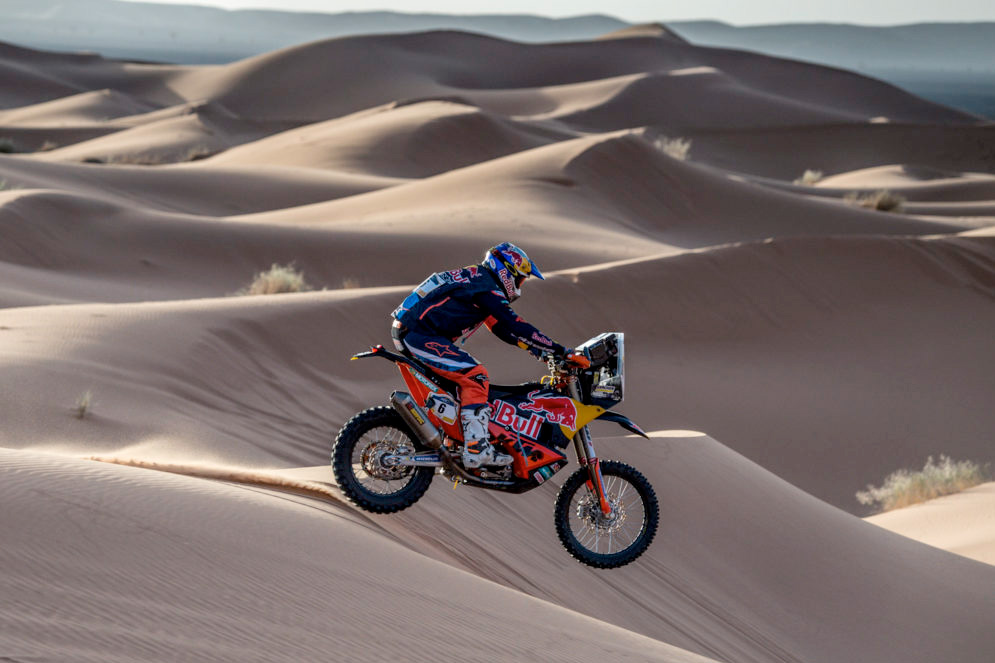 Australian Toby Price had a better day today with no mistakes, as a result the Red Bull KTM Factory Racing rider finished third and moved to fifth overall. Photo: Edoardo Bauer
Setting off early in the morning at 7.00am, riders initially struggled with visibility due to the rising sun.

Red Bull KTM Factory Racing rider Toby Price kept his head down and concentrated on both his navigation and maintaining a consistent pace on the timed special. Keen to not repeat the error he made on Monday‰Ûªs stage one, the Australian was careful to hit every waypoint whilst not losing too much time. At the finish, Price posted the third fastest time for the day, just over three-minutes down on the leader Kevin Benavides.

Happy with his riding and now moves up to 5th in the overall, Toby now prepares himself for tomorrow‰Ûªs tough 240km marathon stage.

"It was a good day today, especially after having such a tough day yesterday," Price said. "I kept to a good pace and concentrated on my navigation. I just nailed each section and tried not to make the same mistakes as yesterday and lose a chunk of time. After making a mistake like yesterday, you lose confidence in your road book, so today was all about building that confidence up again and getting a solid result.

"The bike was great again today and now we have to plan for tomorrow‰Ûªs marathon stage. I think it is going to be pretty tough, but I‰Ûªm not opening the stage so I should be able to chase down the guys in front a little while hopefully conserving myself and the bike.‰Û 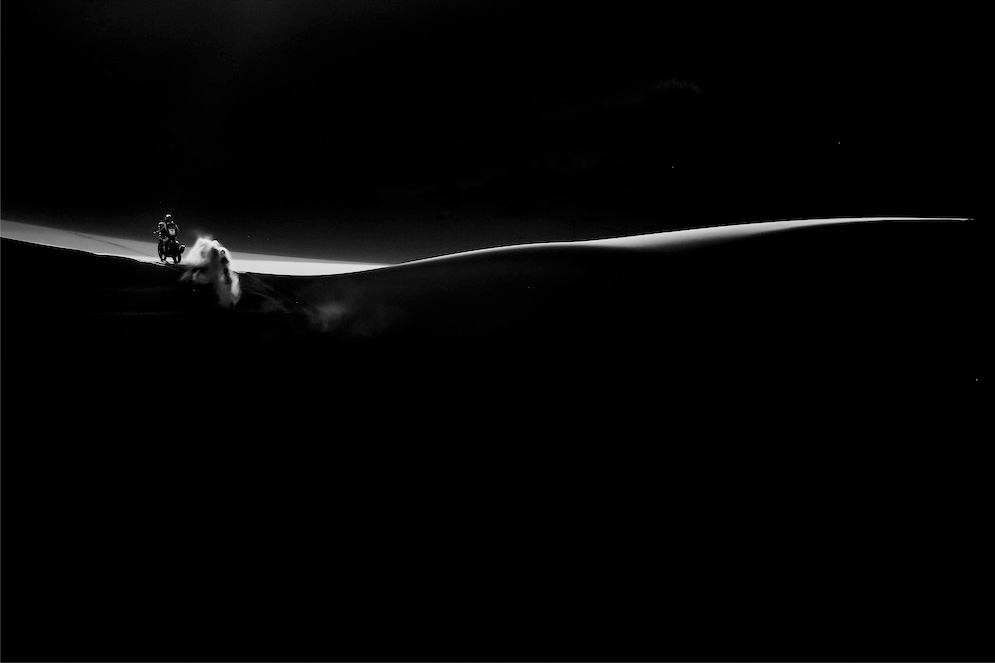