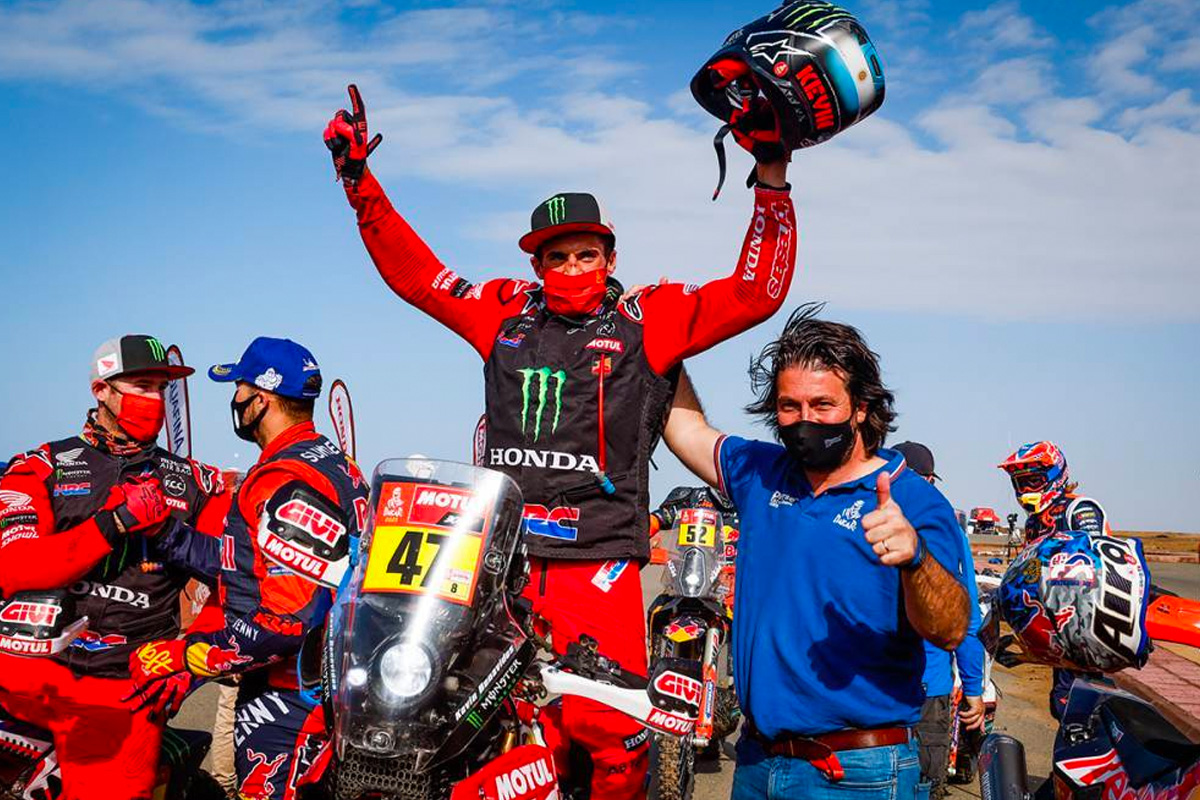 Kevin Benavides claims his first Dakar title.
Kevin Benavides has seen a dream come true as he concludes the 2021 Dakar Rally as champion while defending champion Ricky Brabec claimed second after taking the spoils on the final special stage.

The 43rd edition of the Dakar Rally proved to be one of the toughest in its history. With organizers delivering a punishing route across the entire 12 days of competition, the event included a wide variety of terrain together with some of the most technically demanding navigation seen in recent years.


Benavides made history to become the first South American rider ever to hold aloft the winner‰Ûªs heavy bronze Touareg. The Argentinean, whose consistency turned out to be the decisive factor, claimed two stage wins in the rally.

"The final stage of this Dakar 2021 was very difficult: I started third so I thought that it would be easier, but it was not like that," Benavides said. "At kilometre 50 all the riders in front got lost, so I began to open the track. The stage has been very difficult to navigate so I stayed very focused on doing things well. I gave everything to achieve this win which is a dream come true for me. I am very happy and thrilled about it. I crossed the finish-line thinking about many things, with great emotions... Paulo GonÌ¤alves also crossed with me... It was a great moment. I am really pleased and I‰Ûªm living this moment. I want to thank the whole team, starting with my mechanics, for the great job they have all done this difficult year. Thanks also to Honda for giving us such a great bike which made it possible to achieve the dream." 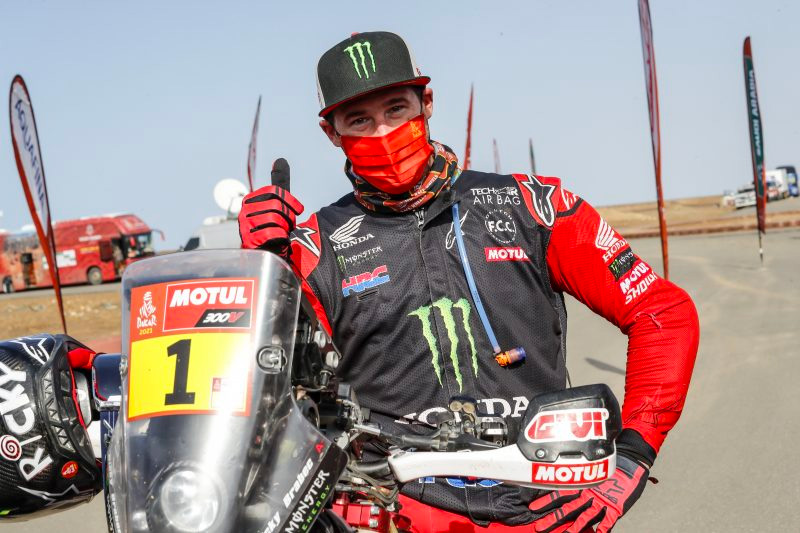 Ricky Brabec claimed the final stage win but it wasn't enough to overcome his team-mate so the defending champion had to settle for second.
Honda‰Ûªs success was rounded out with runner-up spot going to American Ricky Brabec. The winner of last year‰Ûªs edition finished with a final tally of four stage wins, including today. The last time Honda managed a one-two in the Dakar Rally was back in 1987 at the hands of Cyril Neveu and Edi Orioli.

"We are back in Jeddah. Kevin and I did a great job. The whole team did a great job," Brabec said. "It was unfortunate for Joan and Nacho. I tried to make a push to try and get Kevin seven minutes ahead, but unfortunately I failed that. I had to settle for the number two spot. All in all it was a great rally. My mentor and my assistant Kendall, my mechanic Eric did a great job and kept Nacho and I focused and in one piece. Thank you guys once again, and hopefully next year we‰Ûªll be able to take the number one back on this bike." 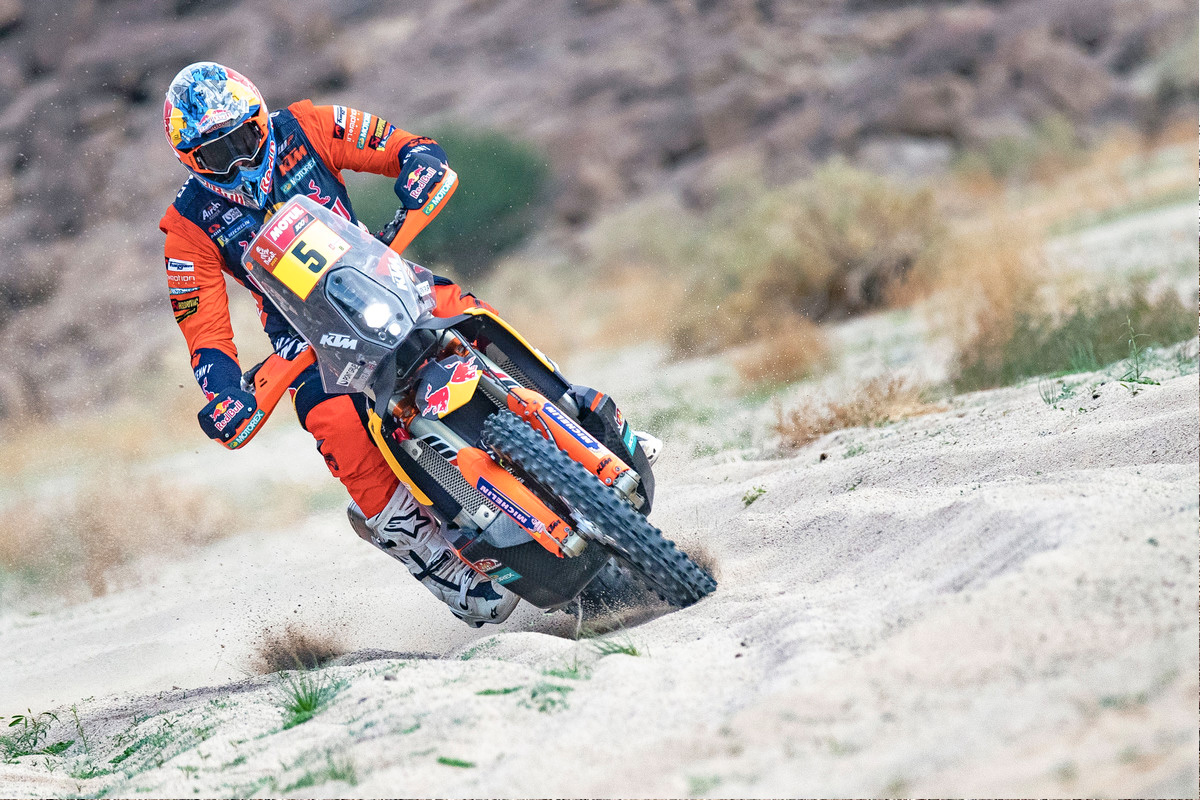 Brit Sam Sunderland claimed third overall.
Sam Sunderland, using his vast experience, chose to maintain a solid but steady pace through the first half of the race, with the Brit lying sixth overall at the halfway point. Increasing his pace after the rest day, and taking the challenge to those ahead of him, the KTM 450 RALLY rider placed third overall by day seven and moved up to second on the penultimate stage.

In winning stage 11, Sam had the unenviable task of opening the 12th and final timed special. Trailing rally leader Kevin Benavides by five minutes going into the stage, the 2017 Dakar winner had no option but to push as hard as he dared during the final 200km as he raced against the clock. Unfortunately, a small error that resulted in him losing almost 10 minutes ended Sunderland‰Ûªs charge for the win. Despite the set-back, Sam safely arrived at the finish to claim an impressive third place overall. Although disappointed not to have secured a second career win for himself, the Brit was happy with how his race had gone.

‰ÛÏI did my best over the whole rally, so I can‰Ûªt be too disappointed, I guess," Sunderland reflected. "It was always going to be hard setting off first this morning and I knew I had to push hard to make up those minutes. I couldn‰Ûªt find one waypoint early on in the dunes and lost far too much time trying to find it. There is always a fine balance and when you push your speed, the navigation can lose out. I‰Ûªm super happy as I know I gave it my all. The other guys did a great job and after what was such a tough event with several crashes and people being forced to retire with technical issues, I‰Ûªm glad to be here safe at the finish line and in third place. I honestly think that has been one of the toughest races I have ever done ‰ÛÒ the pace at the top is so high, we‰Ûªre having to fight every single day and there is no time to relax. Congratulations to all those who finished and get well soon to those who crashed out.‰Û 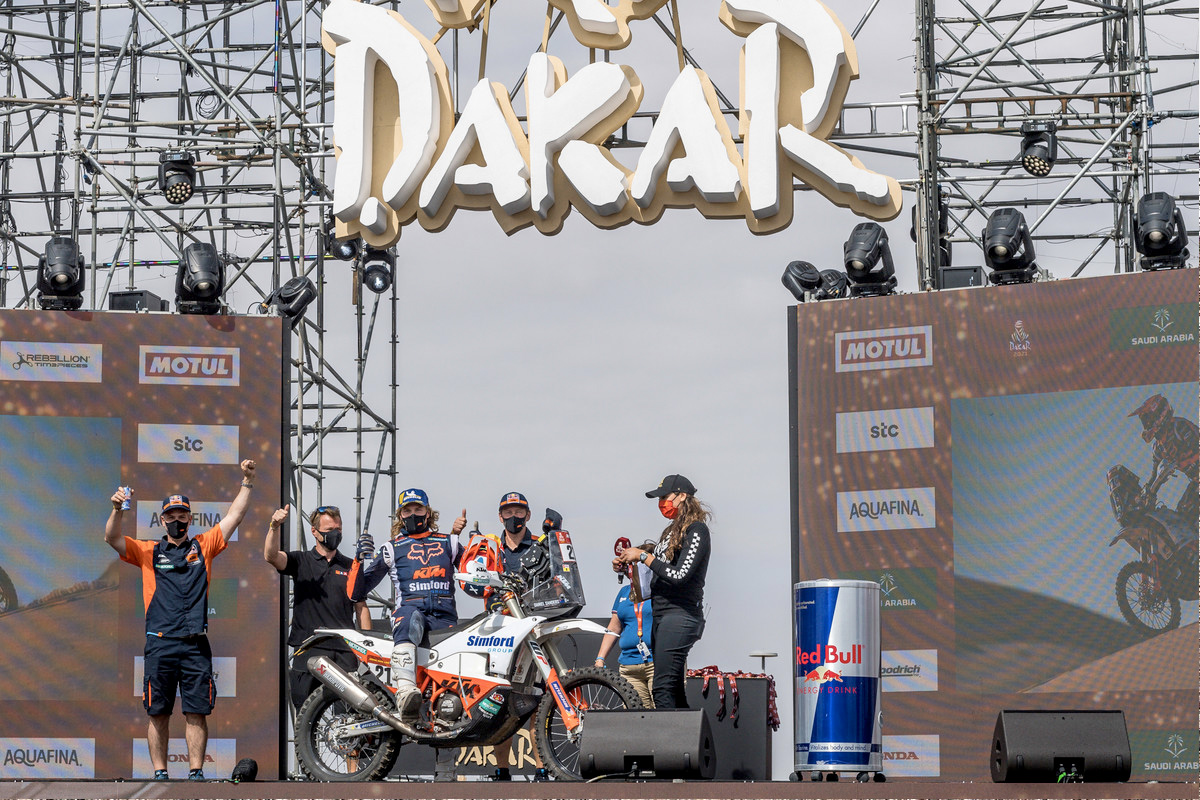 Aussie Daniel Sanders was a revelation claiming the rookie honors with 4th overall and will give Australian plenty to cheer for in the future along with Toby Price.
Contesting only his second ever cross-country rally, Daniel Sanders came into his first Dakar as a true rookie. The Victorian impressed right from the start however, demonstrating incredible speed on the opening Prologue. From there, Sanders went on to mix it with the established Dakar specialists, claiming no fewer than five top-five stage results, including 5th on the final stage, and showed great maturity over the entire event to finish fourth overall.

‰ÛÏAll-in-all it‰Ûªs been a pretty perfect first Dakar for me," Sanders mused. "It started off with a good Prologue and then day-by-day I learned a little more and gained as much experience as possible. I‰Ûªm really pleased to come away with fourth overall and as first rookie, so that‰Ûªs cool. I‰Ûªve only really spent four months on the KTM rally bike, learning as much as I can for this, so I can‰Ûªt thank Jordi and the whole team enough for all the hard work they have done and the faith they put in me. It‰Ûªs pretty much what I expected as I came into the race ready for it to be really tough. The first few days weren‰Ûªt so bad ‰ÛÒ yeah, the navigation was tricky, but it wasn‰Ûªt till about day five or six that we had some hugely physical stages in the dunes. That, and after a couple of crashes, my body really started to hurt. It‰Ûªs all been worth it though, I‰Ûªm over the moon with my result and glad I‰Ûªve been able to gather all the information together and come away with a strong finish. It‰Ûªs been the toughest race I‰Ûªve ever done, but I‰Ûªm already looking forward to the next one!‰Û 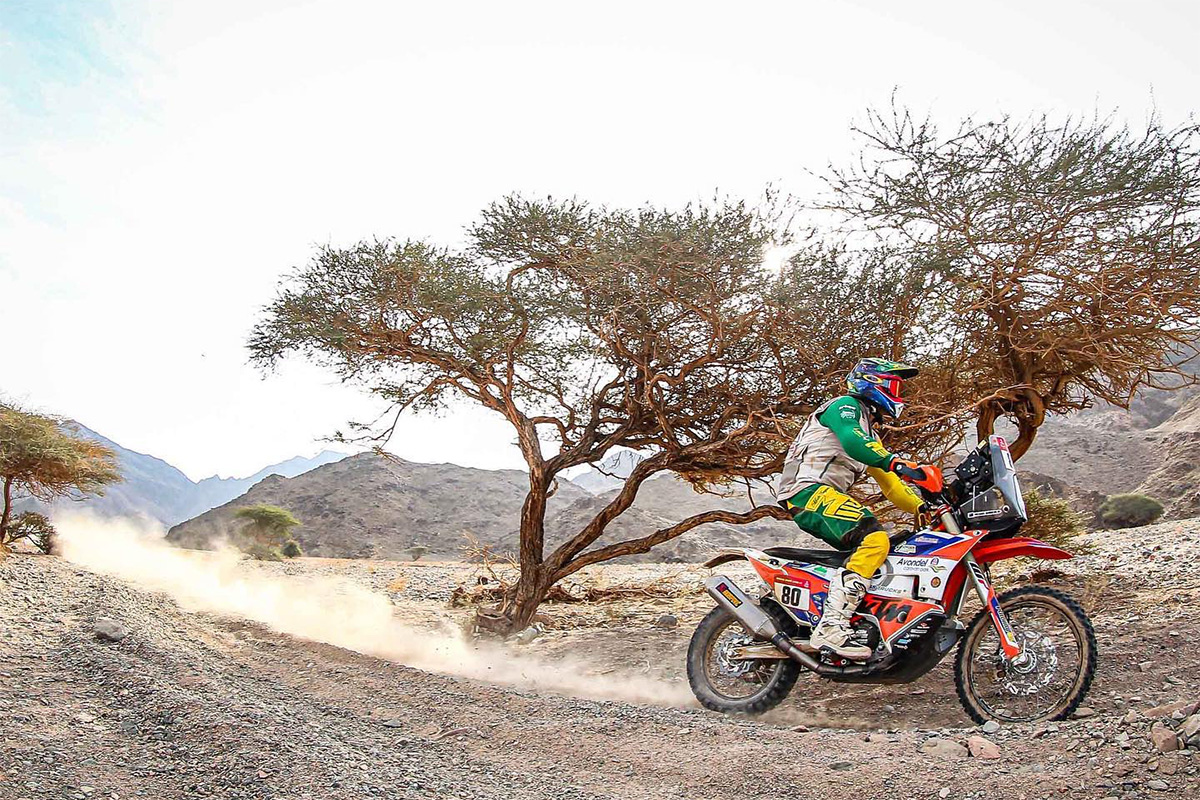 Adding another astonishing chapter to her remarkable career Laia Sanz successfully completed her 11th consecutive Dakar Rally and claiming the unofficial female win and 17th overall. Saving her best until last by claiming 17th on the final stage, Laia not only brought the super-challenging event to an emotional and positive close but again underlined her position as a true Dakar legend. 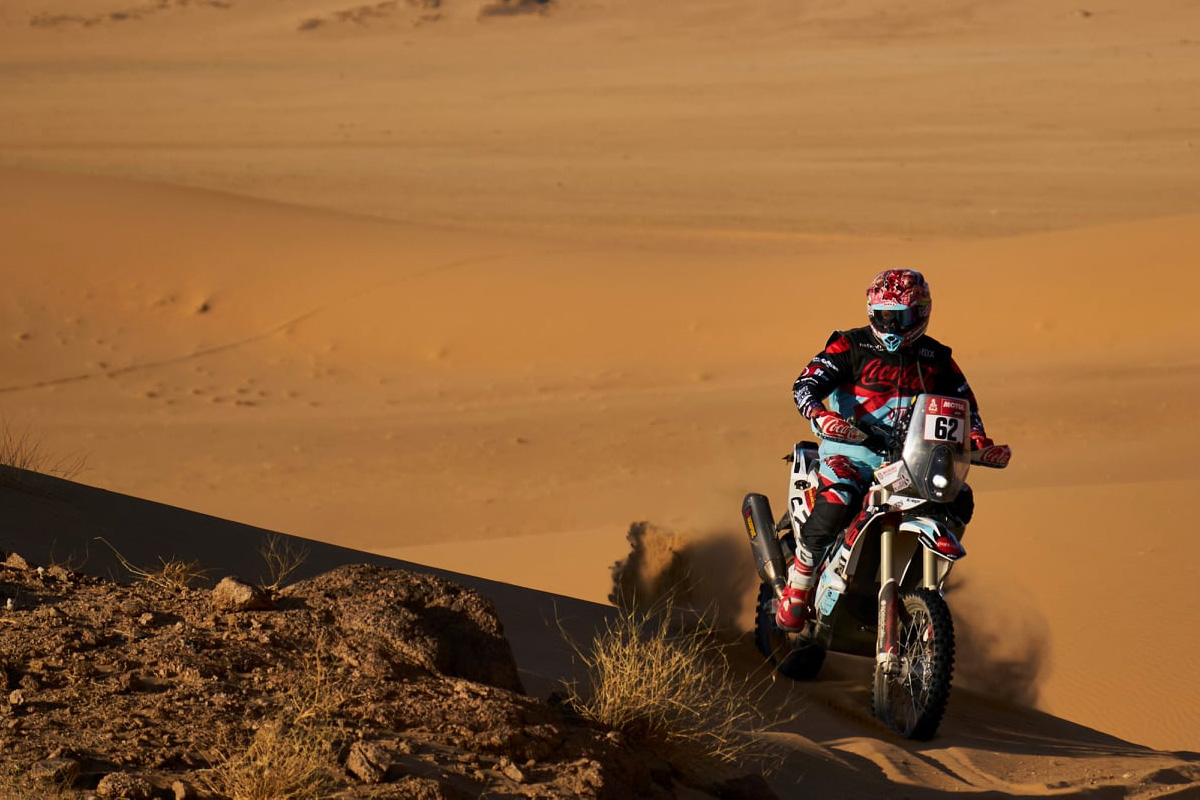 Andrew Houlihan made it three Aussies home with the rider from Albury finishing inside the top 50. 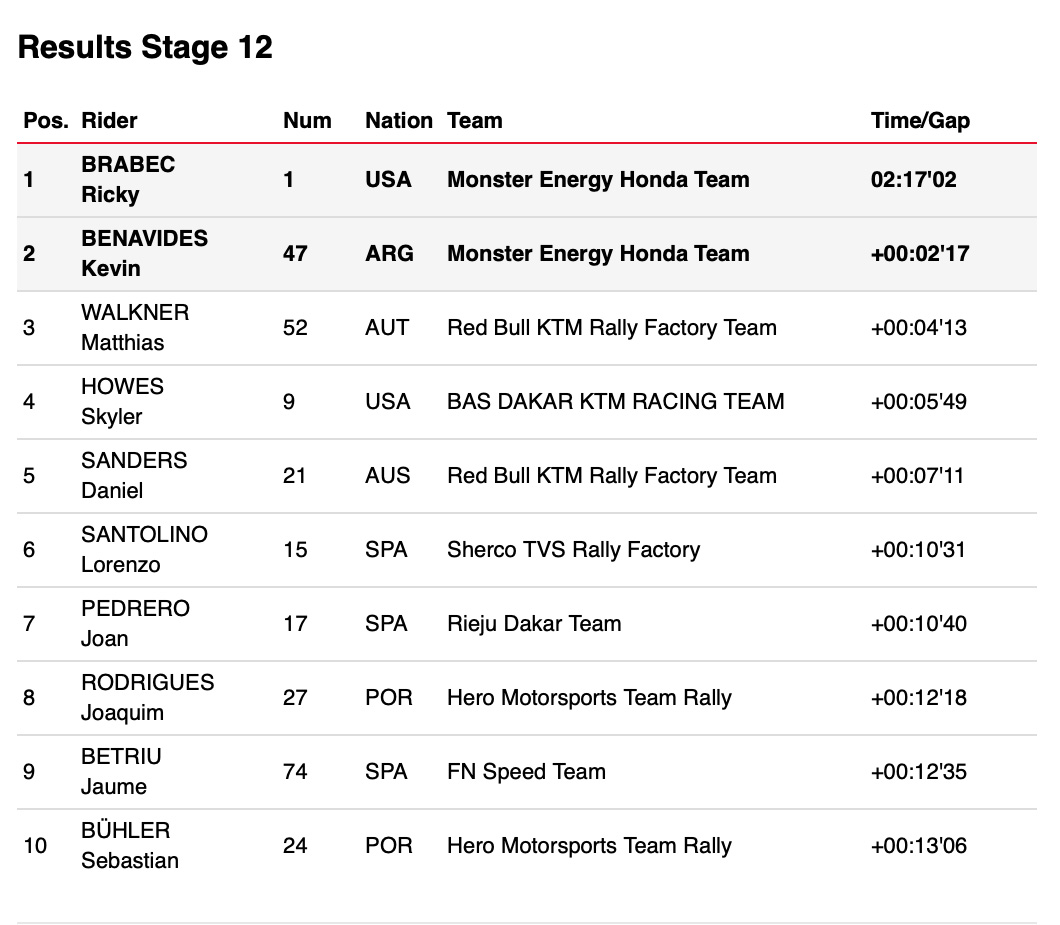 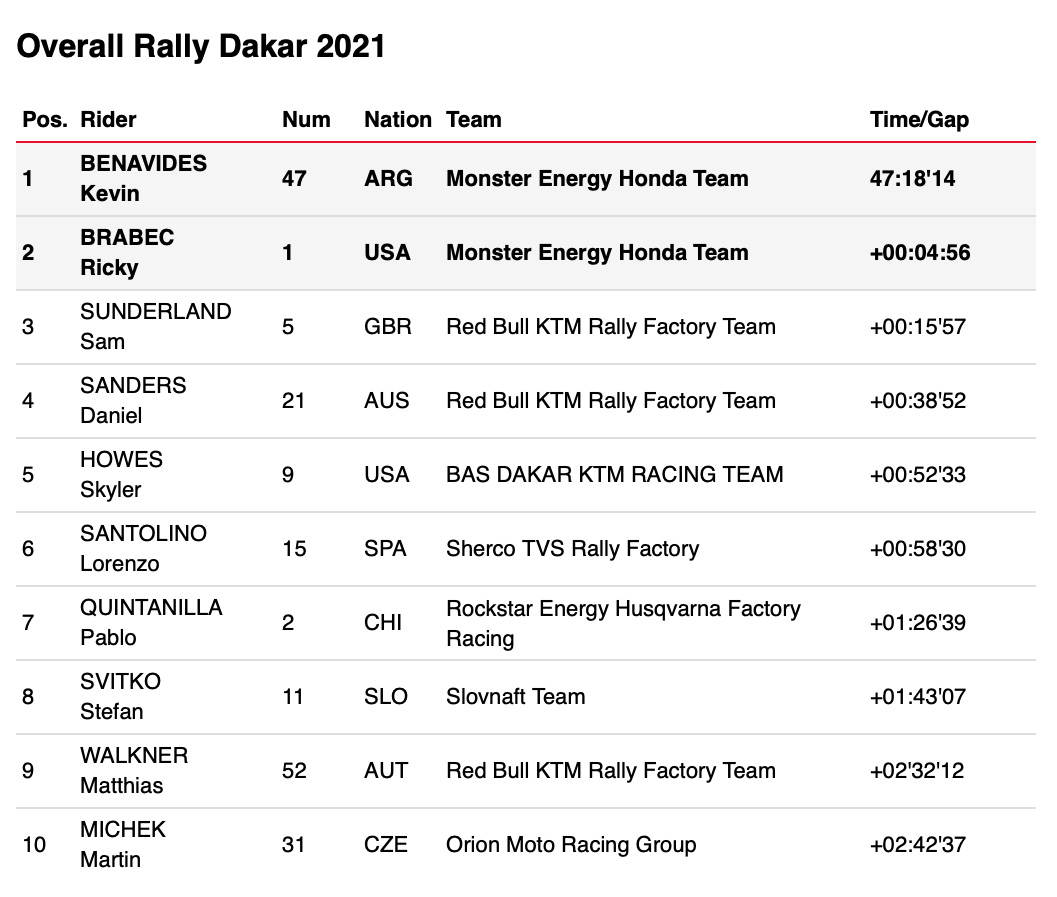