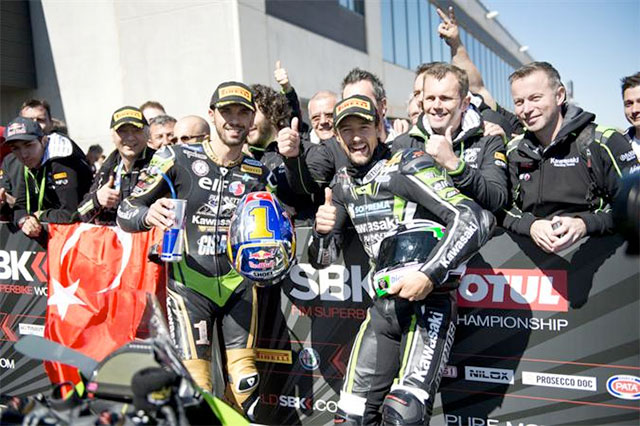 It gave him a class leading 25th Superpole win in the WorldSSP category and ensured he would start from the optimum spot on the front row for Sunday‰Ûªs 16-lap race. His team-mate Randy Krummenacher was second on the grid.

Sofuoglu spent most of his time working on a race set-up and then a change in setting allowed him to go for his successful qualifying time in the 15-minute Superpole 2 track session.

Randy Krummenacher (Kawasaki Puccetti Racing), winner of the first race of the year, was second, overcoming some technical issues that prevented him making a full quota of laps over the first two days of track action.

Krummenacher‰Ûªs second place lap time put him 0.830 seconds behind Sofuoglu but ready to fight for another podium in what will only be his third WorldSSP race start since his move from Moto2.

"It‰Ûªs nice to make 25 Superpole wins and at the beginning we worked a lot on old tyres and with full tank of fuel, to make a race simulation, and never focused on a fast lap time," Sofuoglu shared.

"We made a big change on the bike today to go for a good lap time. Yesterday we had some issues when I tried something on the bike but we made the change today and the bike is quite a bit different. I am still adapting to it but it looks like we have a good advantage. The most important thing is to be ready for the race tomorrow. The main thing is that I am strong on worn tyres so I am very happy to face the race.‰Û