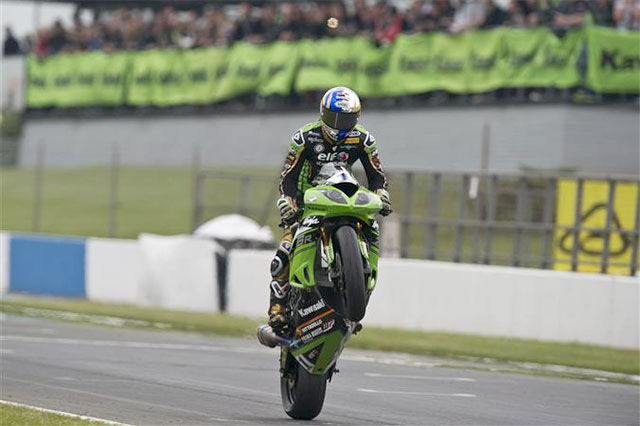 Honda's PJ Jacobsen followed the Turkish rider homes with Sofuoglu's team-mate Randy Krummenacher moving up from fifth in qualifying to third place in the race, his third podium in what is his first ever WorldSSP season.

Starting from pole position Sofuoglu had PJ Jacobsen pass in front of him as he entered the first corner but he soon got by his American rival and led across the start/finish line every lap from then on.

Kenan‰Ûªs pace eased off in the final part of the race, allowing the advancing Jacobsen to draw closer for a time. Despite a well-used rear tyre Kenan upped his pace at the vital time and held on for a clear margin of victory of 1.569 seconds. This was Kenan‰Ûªs third race win of the year.

‰ÛÏToday was a good day and everything worked very well, except for the cooler conditions. I immediately took the lead because PJ was slow in font of me. I passed him and tried to pull a gap and the plan worked very well," Sofuoglu said.

"With the last five or six laps to go I started to slow down a little bit because the left side of the tyre was worn. I saw that PJ was coming closer so I started to push again and it worked out well. I am very happy to win again. I think PJ had less of a problem than me with the tyres because he was spinning a lot and when you spin you heat the tyre. My riding style is too smooth to heat the tyre but I am very happy because we took a Superpole win, a winning race and 25 points. You cannot ask for more so a big thanks to my Puccetti team as they did a really great job without any mistakes and we won.‰Û 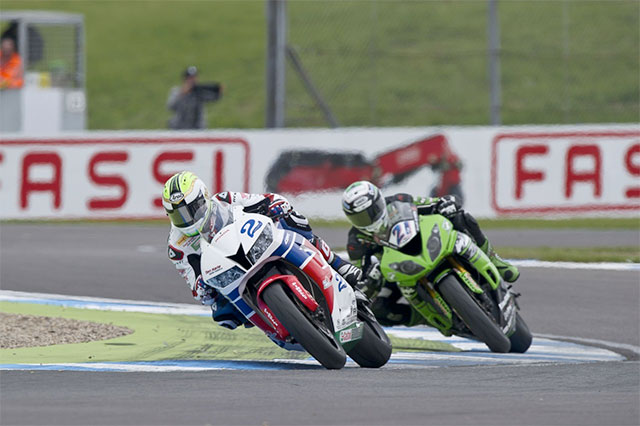 PJ Jacobson split the the Kawasaki duo with second place
PJ Jacobsen was able to hold on to second place from a determined Randy Krummenacher, who tried without success to get past the American.

"At the beginning of the race I let Sofuoglu get away a bit too much, because honestly I thought that tyre wear would have been higher than it turned out to be in the end," Jacobsen explained.

"With seven laps to go I started pushing to try and bridge the gap to Kenan but two laps afterwards I almost had a big highside and that told me I was on the tyre limit already. I did all I could but obviously it didn‰Ûªt pay off, but I want to thank the guys for their amazing effort, because we‰Ûªre getting there and we‰Ûªre back in the game. I believe that from now on we‰Ûªll have the chance to be at the sharp end of the field at every track. 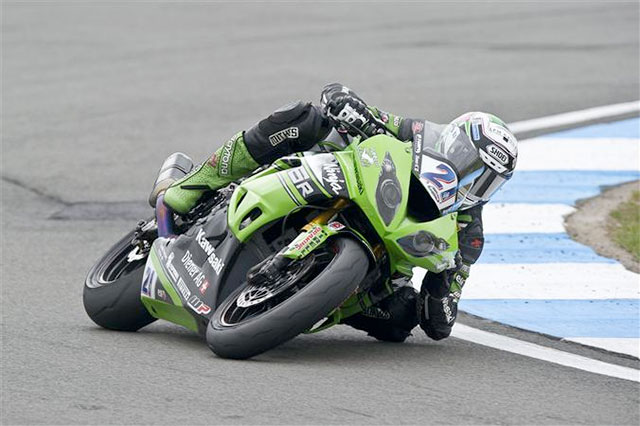 Randy Krummenacher rounded out the podium
In his first ride at Donington Park for some years, and his first on a Supersport machine at the English venue, Randy Krummenacher found most of the pace he had just missed out on in qualifying. He ended raceday in third place, just 3.775 seconds from his team-mate Sofuoglu.

‰ÛÏI am happy to be back on the podium because the last time was in Motorland Aragon, which feels like a long time ago," Krummenacher said, "It was good to be back up there after Imola and Malaysia which were not that good, and so I can be really pleased with a third place.

"At the end of the race I missed a step to find Kenan and he was really strong, especially at the beginning of the race. I was pushing hard and at the end I also tried to stay with PJ and attack him but he was so strong at the end. I said, ‰Û÷Ok, let‰Ûªs take the third and bring it home.‰Ûª This is a good result and I have more confidence for Misano. I know this track in Italy a bit better. Here, I have to say my riding is not at its best. Some racing lines I could do better but I gave my best. On other tracks I can be faster.‰Û