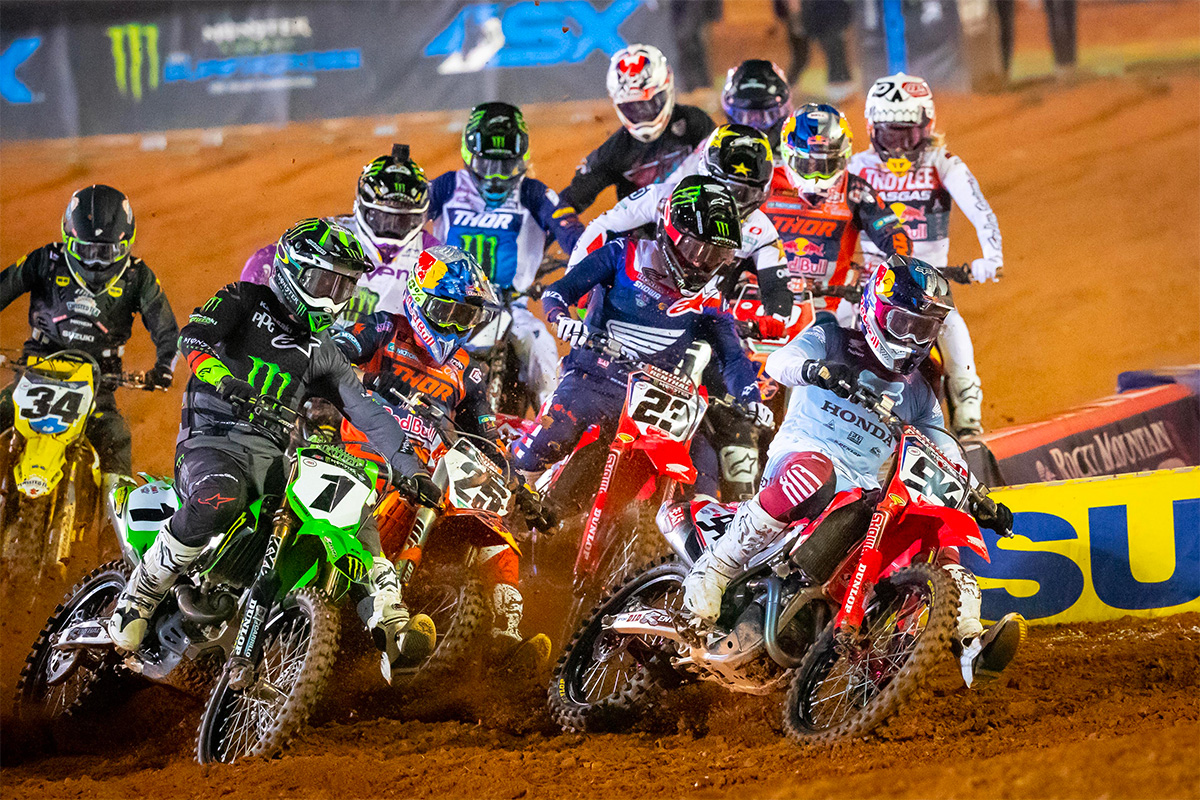 Ken Roczen (#94) makes speed look easy when he is on. He made his fourth win of the season look effortless in Atlanta. Photo Credit: Feld Entertainment, Inc.
The fourth and final SuperTuesday race of the 2021 Monster Energy AMA Supercross was a wild one with Ken Roczen taking the 450SX Class win and a significant points gain in the title chase under the lights at the Atlanta Motor Speedway.

Earning second place and his second ever 450SX Class podium was Roczen's team-mate Chase Sexton, with Jason Anderson earning a hard-fought third place in front of the limited-capacity, pod-seated fans across the speedway grandstands. The Western Regional 250SX Class Main Event was hard to believe, but when the checked flag flew Justin Cooper notched his third win of the year to stretch his points lead to nine.


When the racers emerged from the first corner in the 450SX Class Main Event, points leader Cooper Webb darted into the lead at the holeshot stripe. But Roczen, down 22 points and second in the title chase, got around Webb immediately and was never challenged for the lead as the Honda rider steadily stretched out a gap on the field. Webb was slightly off the pace and steadily fell back in the early laps, allowing his points lead to shrink with each pass in the 20-minute plus one lap race.

Jason Anderson, who started outside the top five after a trip through the Last Chance Qualifier left him with a less than ideal gate pick, was aggressive and wasted little time moving through the pack. With just over three minutes off the race clock Anderson broke into the top five, cut under Webb and into fourth less than two minutes later, and at the race's midpoint got around Justin Barcia to reach his finishing position of third. 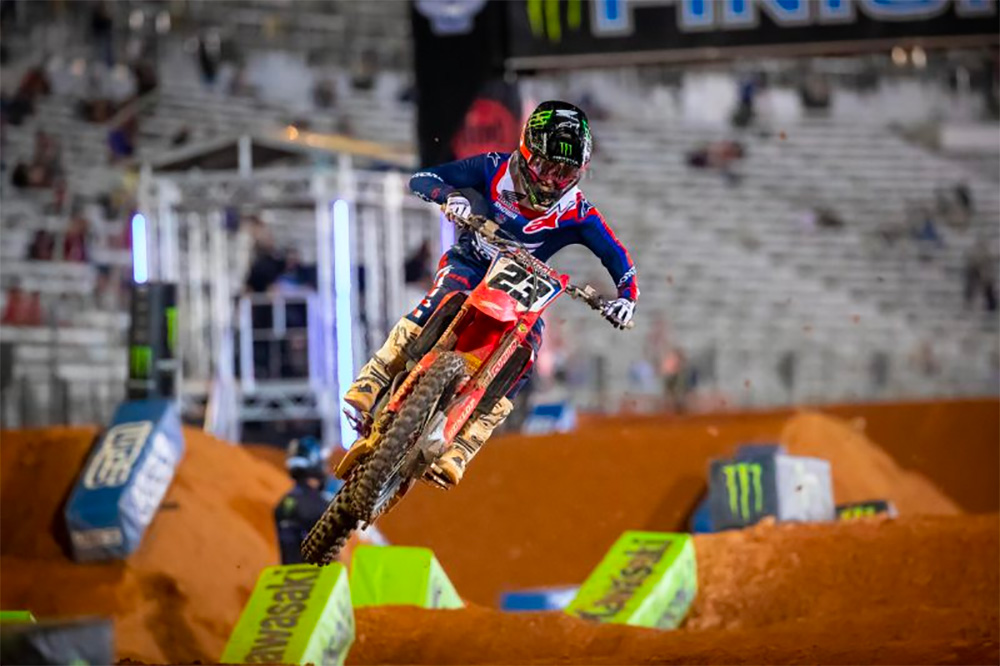 Roczen's team-mate Chase Sexton was happy to back on the podium for the second round in a row but is still looking for the win
Barcia, who'd gotten around Webb in the early laps, found himself under attack by the KTM rider in the final minutes of the race. Barcia was aggressive holding his position and after a few close calls he and Webb made contact; Webb went down. Fortunately it was a gentle crash and Webb remounted with the loss of only one position, to Eli Tomac. It was a dramatic race and a big points swing in Roczen's favor with three races remaining on the schedule.

‰ÛÏI changed my mindset bigtime for tonight‰Ûªs race," Roczen said. "It started already in free practice, with setting the fastest lap time by just being aggressive. At the same time, we did some changes to the bike that helped out, but of course it‰Ûªs always unproven until you start racing it. We did a bunch of changes throughout the entire day, and it really seemed to pay off. I was pumped with how I was riding, but I knew the main event was going to be a long one, just because of how tough and long the track was. I‰Ûªm so pumped for Honda to have pulled off a first and second; it was a huge night for us, also in the points chase, and I hope we can keep this up and come back and battle again for Atlanta 3.‰Û 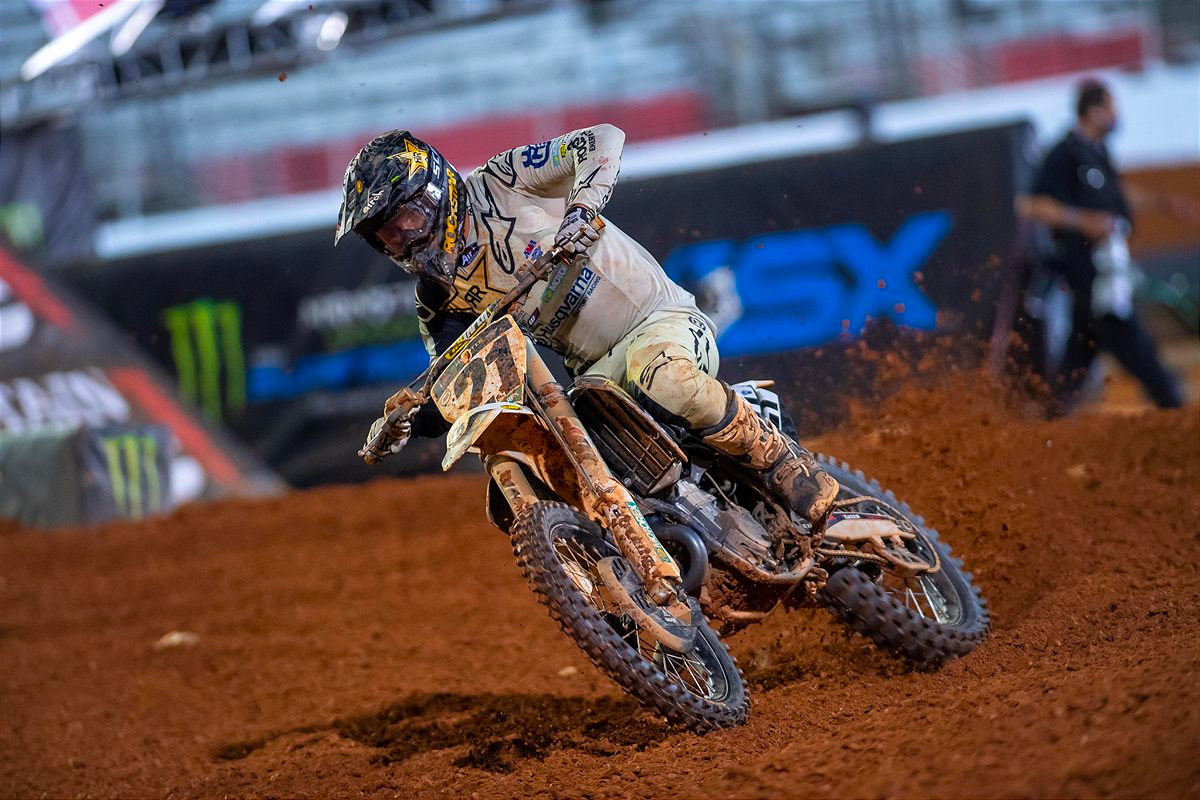 Jason Anderson locked in third to secure his second podium finish of the season.
Roczen's team-mate Chase Sexton was happy to back on the podium for the second round in a row but is still looking for the win.

"It was a good night--obviously, ending up on the podium is always good. I felt good all day; the faster track really seems to be suiting me, just having more room overall, to move around a little bit and have different options," Sexton explained. "I really liked the track and obviously it‰Ûªs paying off with getting on the podium twice here. Second-place finishes are going to get old really fast--I just want more--but it‰Ûªs cool to see Honda 1-2 on the podium. I‰Ûªm looking forward to building on this Saturday, and we‰Ûªll try and get a win.‰Û 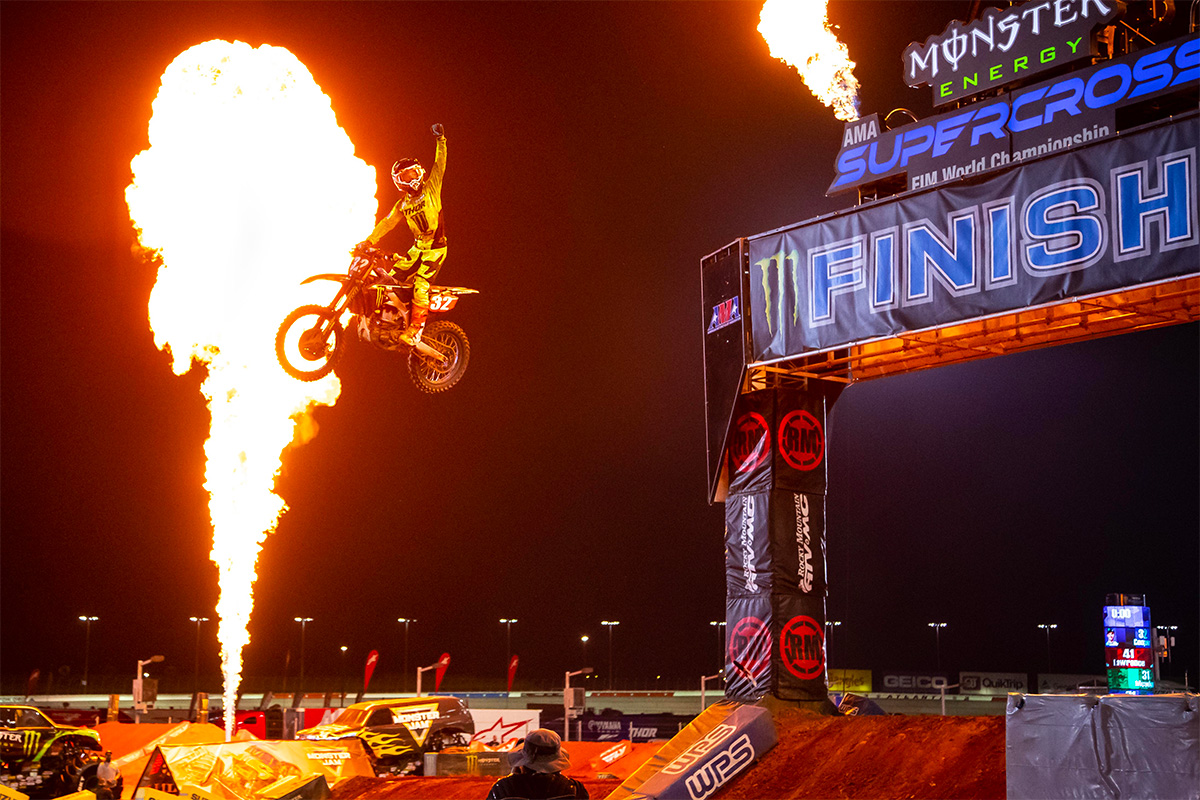 Justin Cooper kept clear of the drama with a championship-focused ride. He had the field covered on the rough, tough Atlanta track. Photo Credit: Feld Entertainment, Inc.
The Western Regional 250SX Class Main Event was one that will be re-watched, re-told and likely fall into the legend of the sport. Less than three laps into the race, Cameron McAdoo, who was battling in fifth, crashed over the handlebars and was slammed brutally by his own bike into the steep face of a bridge jump. Worse still, the bike caught McAdoo's foot and whipped him violently in a full, body-extended front flip to deposit him with another hard slam onto the top of the flat jump obstacle.


McAdoo lay still for a frightening moment but soon was attended to by the trackside Alpinestars medical crew. With an injured rider down on the top of the jump the race was red flagged. With fewer than three laps completed, though the Atlanta track's lap times were nearly twice as long as on a standard track, the rule book called for a full re-start.

As the racers loaded back into the gate, miraculously Cameron McAdoo was among them, pleading to officials to allow him to re-start. He'd been evaluated and cleared to ride, and with a second evaluation completed on the spot, the rider was allowed to remount his bike. McAdoo was obviously sore but with no signs of concussion or broken bones. McAdoo, four points down in the title chase with three rounds remaining in that series, was back in the hunt.

Amazingly McAdoo was right up front again. The evaluations seemed to have been spot on ‰ÛÒ the Kawasaki rider had the speed and clearly the desire and started to push hard from fifth place. Two and half minutes into the15-minute plus one lap Main Event he made his first pass on Garrett Marchbanks, but the Yamaha rider battled back around. Less that a lap later McAdoo made his second pass stick with an inside line in the sand and set his sights on second place rider, Thrasher. 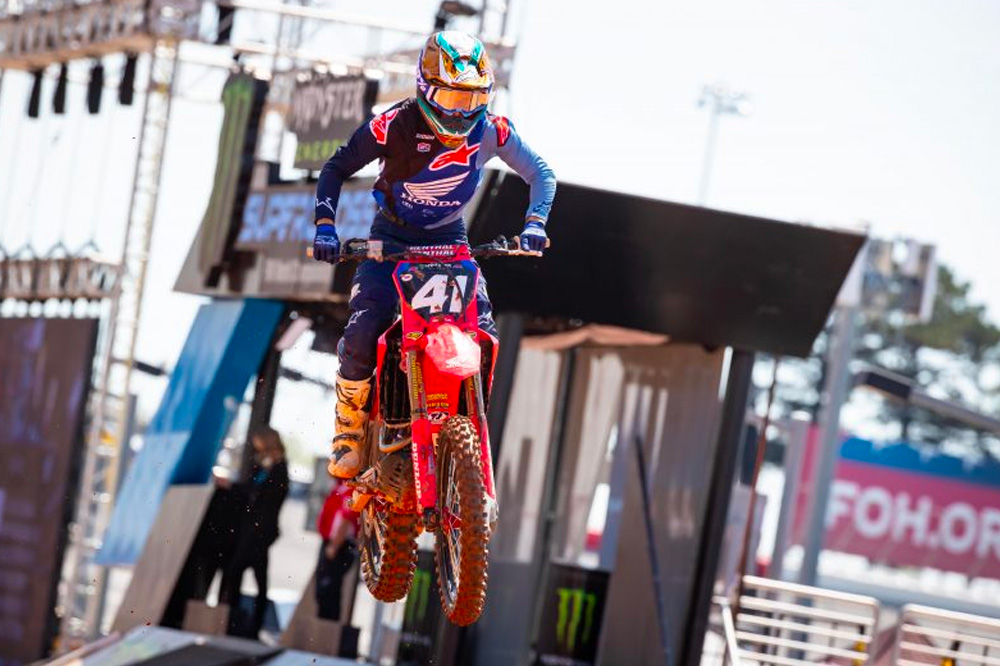 Second place sees Hunter Lawrence third in the championship.
Just five minutes into the race McAdoo got past Thrasher and into second, with only a 3.6 second deficit to Justin Cooper out front. But as much heart as McAdoo was showing, Cooper was matching it with a composed ride on the brutal track. Cooper slowly stretched his lead to over nine seconds as Australian Hunter Lawrence clawed his way forward past Marchbanks and eventually past McAdoo with two laps remaining. Justin Cooper's speed may be eclipse in racing lore by McAdoo's heart, but it was a significant night in the championship for both riders.

‰ÛÏIt was a good day starting with being fastest in every practice again," Cooper said. "I got a pretty bad start in the heat race and got shuffled back to fifth, but I came back and made a last-lap pass on Hunter (Lawrence). We had a pretty good battle there. The Main Event got red-flagged a couple of laps in, which made it pretty tough. It was hot out there. Honestly, sitting on the line before the restart, I was like, ‰Û÷wow!‰Ûª I had to take my goggles off because I was sweating, and then we had to do the whole 15 minutes again. It was really physically demanding tonight, especially with not having a lot of rest after last Saturday‰Ûªs race. It was good to get out of this one with a win and extend our points lead. We‰Ûªll recover for Saturday and try to do the same thing again.‰Û 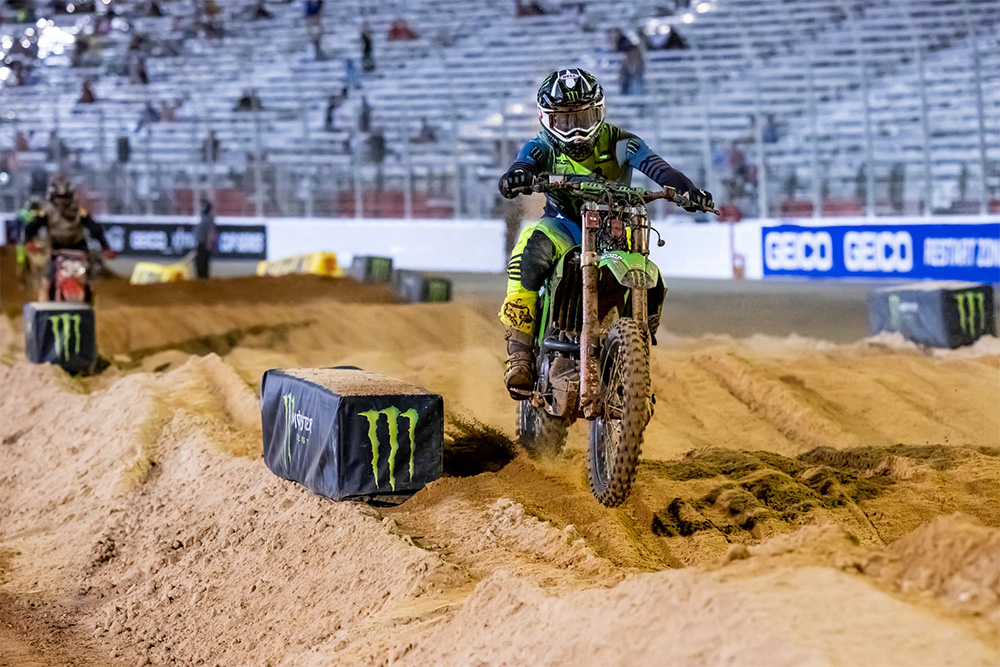 Cameron McAdoo remounted after a gnarly crash that caused a red flag only to finish third once the race restarted.
After having a tough day Aussie Hunter Lawrence rebounded to end up second on the podium.

‰ÛÏIt was a tough day, actually. We were struggling with bike setup all day, and after the heat race the team made a really good decision," Lawrence explained. "We made a shock change for the main, and we had to test it on the site lap, when I had to push to get a feel and make sure we didn‰Ûªt have to change any clickers; I was happy with how the bike felt. In the first part of the race, before it got red-flagged, I was feeling really good but then crashed in the whoops. Thankfully, that race got scrapped and we were able to start again. I didn‰Ûªt get the best start, but we just kept fighting the whole way. I had a really good ride and am pretty content with that for where we were during the day and for the start I had.‰Û