Ken Roczen loving where he’s at, at the moment 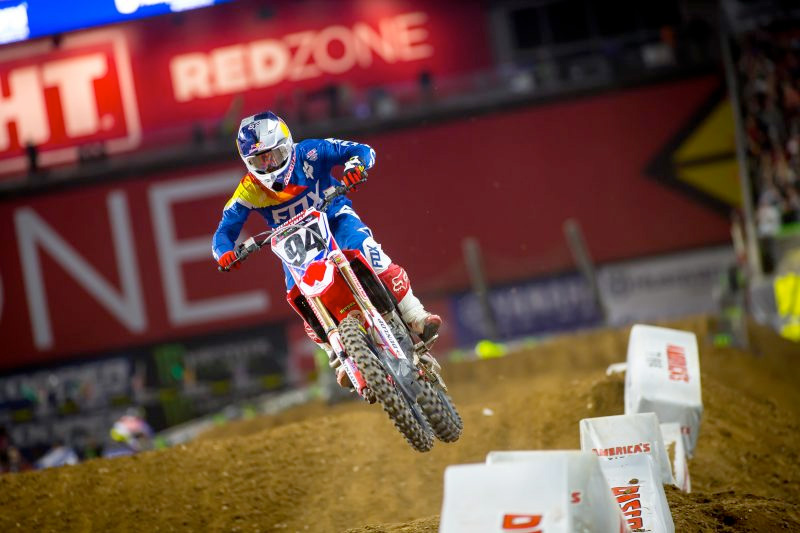 Team Honda HRC‰Ûªs Ken Roczen turned in an impressive performance aboard his CRF450R at round four of the AMA Supercross series in Glendale, Arizona, scoring his second podium result of the season with a third-place finish.

Roczen was on the pace early when he clocked the second fastest qualifying time (55.793), two tenths quicker then team-mate Cole Seely. When the gate fell for the main event, Roczen rounded the first turn in sixth, but he quickly made his way into fifth on the opening lap. The German continued his charge forward, taking over fourth a few laps later. With his sights set on the podium, Roczen began applying pressure on third-place rider Weston Peick, battling hard before finally making a pass stick on lap seven. He spent the remainder of the race trying to close the gap on Justin Barcia, but mistakes in the race‰Ûªs closing minutes caused him to lose time and settle into third.

‰ÛÏWe found ourselves on the podium again tonight with a third place, which is awesome," Roczen enthused. "We had a good heat race, but I really need to work on improving my starts. I have the speed and fitness, but I just need to put myself up front in the beginning.

"I was in sixth off the start, made some passes, and got myself into third," Roczen continued, "I rode some solid laps and was inching up on Justin [Barcia], but unfortunately, we ran out of time. All in all, I‰Ûªm happy with tonight‰Ûªs racing. Obviously, we want to win, but after last weekend it was important to me to come out here and ride how I did. It was a big confidence booster. The team and everyone has been putting in a lot of work each week. I‰Ûªm having a lot of fun right now and loving where we‰Ûªre at, so we‰Ûªll keep building from here.‰Û 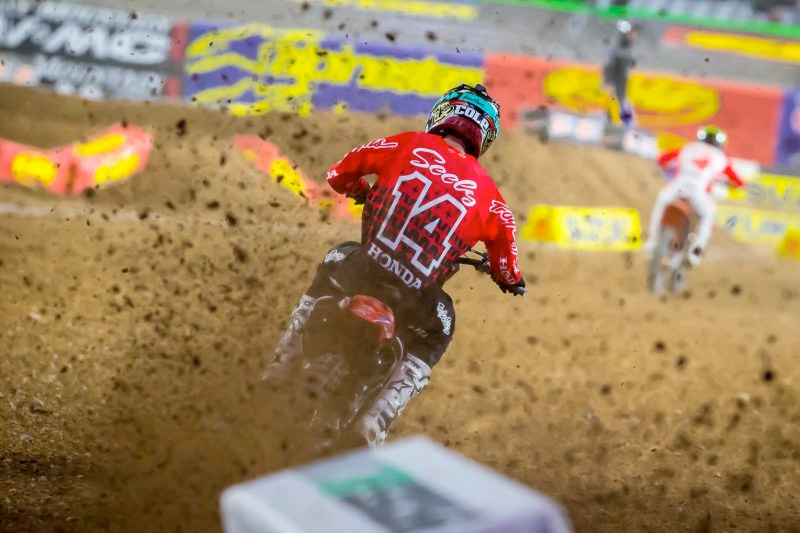 Cole Seely had a night he‰Ûªd like to put behind him, as a poor start and a big mistake toward the end of the 23-lap main event saw him take the checkered flag in 12th place. Having been saddled with a poor gate pick, Seely struggled off the line, completing the first lap in 15th place. By the halfway mark, the Californian had made his way into eighth. A close call in the sand section caused him to lose his rhythm and fall off the pace, ultimately sending him back to 12th position.

‰ÛÏI‰Ûªm really disappointed with tonight," Seely lamented. "I didn‰Ûªt have a great gate pick and somehow my boot got snagged on the metal start grate so I got a terrible start in the main. I worked my way forward a bit, but I almost went over the bars coming out of the sand and it kind of knocked the wind out of me. Mentally, I couldn‰Ûªt regroup after that. I wasn‰Ûªt tired physically but after that I struggled to focus on hitting my marks.‰Û