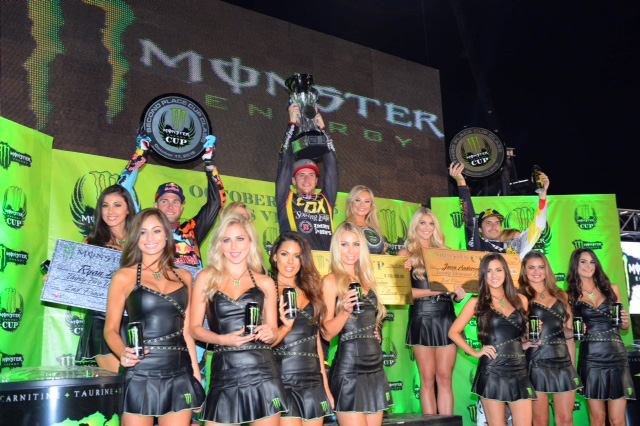 While leading, Canard crashed, allowing Roczen to assume the lead. Dungey took over second-place and moved into third place. On Lap 9, Roczen went through the Joker Lane, a slower section of the track that every rider must take at least once after the first lap, and Anderson moved into the lead.

Anderson did cross the finish line in first place but was penalized for not taking the Joker Lane. Roczen won the race, with Dungey in second place and BTO Sports KTM's Davi Millsaps, the reigning Monster Energy Cup Champion, in third place.

"I knew that I wanted to take the Joker Lane on the last lap, and it worked out for me," said Roczen. "I look forward to coming out strong for the second Main Event."

Anderson won the Toyota Holeshot Award in Main Event #2, but Autotrader.com/Toyota/Yamaha's Justin Barcia quickly moved into the lead on the opening lap. On Lap 1, Anderson passed Barcia for the lead on the AMSOIL Arch, and Millsaps passed Dungey on the same lap for third place.

Roczen then passed Millsaps on Lap 3 for third place but was passed by Canard one lap later. Canard did not stop, passing Roczen for second place.

Anderson won the race with Canard in second and Barcia in third place.

"I got confused in the first Main Event and didn't take the Joker Lane, but there was no way I was going to make that mistake twice," said Anderson. "It was a great race for me."

Anderson won his third Toyota Holeshot Award in Main Event #3 as Roczen and Dungey trailed in second and third respectively. On the opening lap, Roczen moved into the lead and shortly after, Dungey passed Anderson for second place.

Roczen held on for his second Main Event win of the night and won his first-ever Monster Energy Cup Championship with 1-4-1 finishes. Dungey finished second and third overall with 2-5-2 finishes. Anderson finished third with 6-1-3 finishes.

In his first Monster Energy Cup since 2013, Yoshimura's James Stewart withdrew from racing after the first Main Event, while Australian Chad Reed riding a Yamaha YZ450F finished the night in 10th place.

The 2016 Monster Energy Cup will take place on Saturday, October 17.