Kearney rides through the pain to score points at Kilkivan 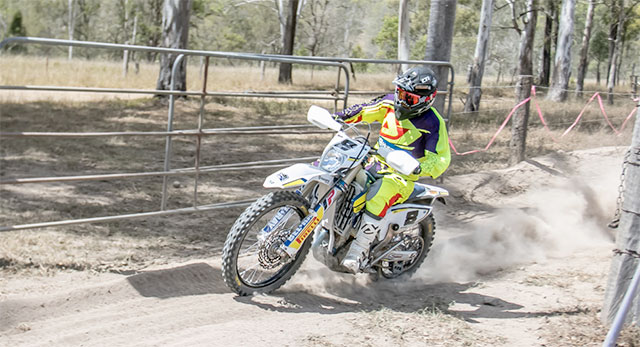 Husqvarna Enduro Racing Team Manager Boss Glenn Kearney epitomised guts and determination, riding his Husqvarna FE250 with a two-week-old shoulder blade fracture in order to get points towards his tilt at the E1 championship, when the Australian Off-Road Championships kicked off in tricky conditions at Kilkivan near Gympie in Queensland over the weekend.

The wily veteran employed some mild painkillers, a bucket of strapping tape and some creative adjustment to his attack position and line selection, and he was justly rewarded with seventh and fifth in class.

"For me yesterday was a struggle with the speed and the heavy braking demands on my shoulder - today suited me better. I used a lot of strapping tape and just a few Panadol and Nurofens. I was thinking about throwing in the towel yesterday when it was hurting and but I stuck with it and got some class points.

"Today I thought I‰Ûªd be fairly sore but the shoulder felt looser so that was a confidence booster for me. I managed fifth in class, I think I was only eight seconds off second, and 12th outright. So I was happy given what we had to work with.‰Û