It has been a glorious summer for Kayne Lamont and he's only just starting to get going. 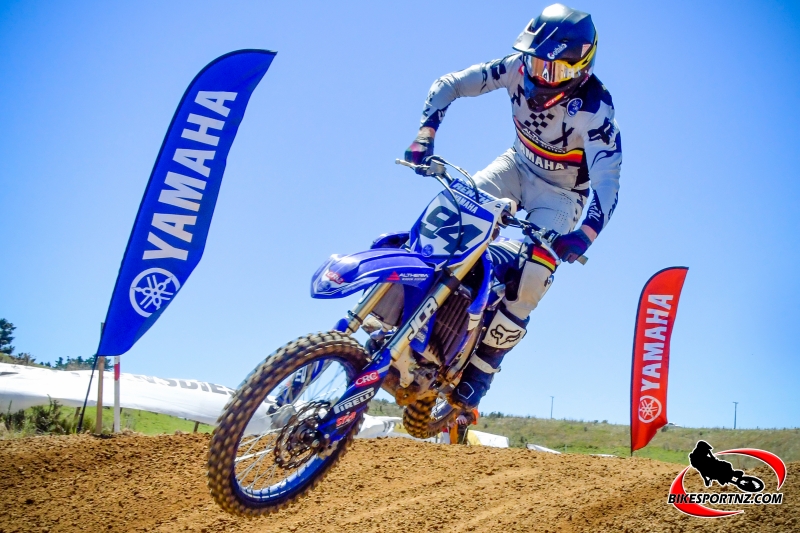 Kayne Lamont dominated the first round of this year's New Zealand Motocross Championships in Taranaki on Sunday winning with 75 Points over Cody Cooper. Credit: Andy McGechan
It has been a glorious summer for Kayne Lamont and he's only just starting to get going.

Lamont dominated the first round of this year's New Zealand Motocross Championships in Taranaki on Sunday with an impressive winning hat-trick in the premier MX1 class and established a solid 15-point advantage over defending national champion Cody Cooper.

The devastating performance by Altherm JCR Yamaha Racing Team rider should perhaps have surprised nobody because the writing had been on the wall right from his MX1 class debut at the season-opening MX Fest event at Taupo last October, when he also that day won the MX1 class ahead of Cooper.

Lamont then finished strongly at the big annual Summercross event at Whakatane just after Christmas, recovering from a crash early in the day to win the final MX1 race of the event. And more was to come from the Hamilton-based former Mangakino rider as he then took his YZ450F to win the NZGP title at the Honda New Zealand Motocross Grand Prix at Woodville just one week ago.

But his performance at the Barrett Road facility near New Plymouth on Sunday was something else again.

"In both races one and two I passed Cooper quite early on and, in the third race, I actually had the lead at the start, until Cooper went past me in turn two. I stayed behind him for a while, hoping that I might wear him down and I could see that his suspension was bucking him. He was making mistakes and I thought he'd either tip over in a corner or crash. He crashed.

"I could see that Gibbs was behind me after that, but I just played it safe and maintained the gap. I backed it off quite a bit near the end.

"This bike is wickedly good. It makes my job a lot easier. I've had great support from my Altherm JCR Yamaha Racing Team crew ... a sort of a team within a team with Isaac Berry again working as my mechanic, Norm Cobb tuning the suspension and my trainer Mike Barnes keeping me in shape.

"I was riding well within my limits here today, as I'm sure most of the other riders were too. This track can bite.

"I'm quite scrawny, so I need to work on building my strength more, but we already have good settings for the bike for the next round in Rotorua." Lamont's Altherm JCR Yamaha Racing team-mates also fared well at the weekend.

Maximus Purvis ‰ÛÒ who won both the 14-16 years' 250cc class and the 15-16 years' 125cc class at the junior motocross nationals at this same track last April ‰ÛÒ came out on top in a battle with Australian rider Mason Semmens, the two teenagers sharing the wins on Sunday.

Altherm JCR Yamaha Racing team rider Jay Wilson was third best in this class, the Australian impressing with his ability to charge through traffic. This was particularly on show in the first race, when Wilson was knocked down in turn one. He went from 39th and last place to 18th position in the first three laps, passing 21 riders in less than seven minutes. He eventually worked his way up to finish the race in eighth.

The former Grand Prix motocross star seemed to become faster as the day wore on and he began to get to grips with the unfamiliar concrete start pad. His eventual 8-3-2 score-card left him just five points adrift of Groombridge after this opening round.

The series now heads to Rotorua for round two on February 25. Round three is set for Hawke's Bay on March 11, with the fourth and final round in Taupo on March 24.