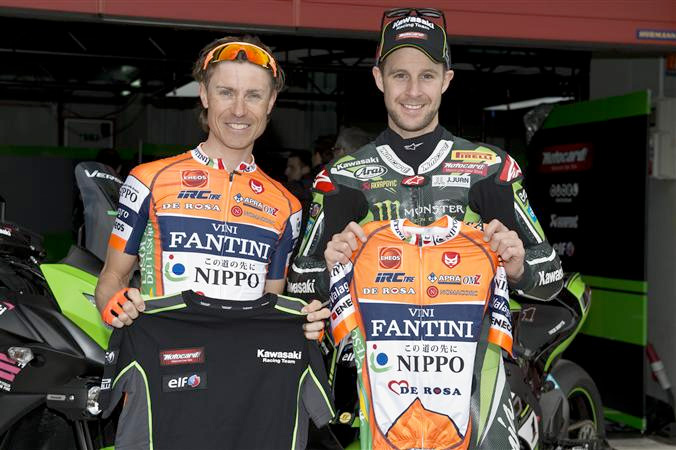 To celebrate the occasion of becoming the official motorcycle supplier to the 99th Giro d‰ÛªItalia cycle race, to be held between 6th and 29th May, the official WorldSBK Kawasaki Racing Team invited former Giro winner Damiano Cunego to the fifth round of the championship at Imola.

Unveiling the graphics of the Kawasaki Versys 650 machine that will be used at the Giro. 2015 WorldSBK Champion Jonathan Rea and Damiano had a chance to compare and contrast their sports and exchange items of their riding kit as a souvenir of the occasion.

As well as the official Versys 650 Kawasaki will supply other models, a total of 30 machines in all, in order to better cover all the race direction/organization needs ‰ÛÒ such as relay race inspectors, support teams, medical teams etc., during the prestigious cycle race through Italy.

The Versys 650 was chosen because is highly reliable machine, which has already been tested and approved by the Giro riding staff who help support the 3.383 km long race in the most arduous conditions imaginable. The Versys is a byword for versatility and reliability making it a match for any of the conditions it will meet next month.

To launch the new initiative legendary cyclist Damiano Cunego from the NIPPO-Vini Fantini team was a guest of the official KRT Team and spent time with enthusiastic cyclist Jonathan Rea. ‰Û÷JR‰Ûª received the new official NIPPO-Vini Fantini team jersey and riding gear from Damiano, while Cunego left Imola with the pair of racing boots that Jonathan used to win both WorldSBK races at Assen recently.

‰ÛÏI exchanged some riding kit with Damiano, who is a legend in the cycling world and who won the Giro d‰ÛªItalia. He is a really nice guy and this was the first time I had met him." Rea said. "It was nice that Kawasaki and WorldSBK made this crossover between Superbike and cycling.

"I have a lot of passion for cycling and do a lot of my training on the bicycle. I have become friends with a few professional cyclists and I know their world quite well. I have huge respect for them in the time they put in during training and the sacrifice they make to get to the top.

"It was cool to make something together and ride together and share our experiences. I hope we will keep in touch and if I can get to the Giro this year maybe I can visit him on one of the stages.‰Û