Kawasaki ready for the MXGP season 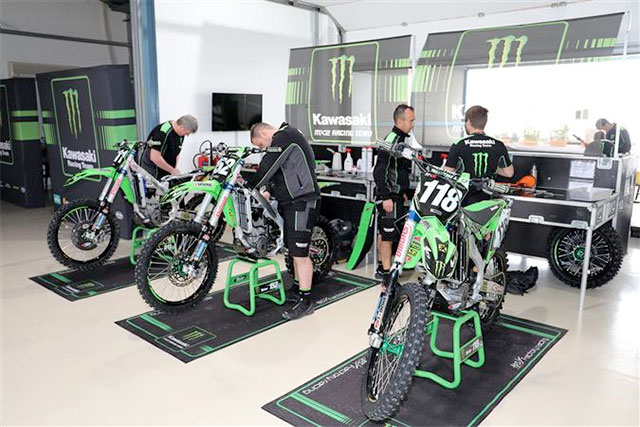 The FIM Motocross World Championship will kick off this weekend in Losail (Qatar) and the three official teams representing Monster Energy Kawasaki are ready for this new and long season.

With nineteen rounds between this weekend and the end of September, 2017 will be another long season for all the teams in the main off-road World Championship.

With the same line up as last season, the Monster KRT Team was able to have a good winter and both Clement Desalle and Jordi Tixier claimed good results during their pre season races at Hawkstone Park and Lacapelle Marival.

‰ÛÏAs we keep the same riders as last year we have been able to work on continuity with Clement and Jordi, and, touch wood, I must say that our two riders are fit and ready this year, a totally different situation to that we faced twelve months ago when both riders were injured," KRT team manager FranÌ¤ois Lemariey who is focused on the MXGP class.

"We had a good winter; in January Jordi went in Sardinia and ClÌ©ment in Spain where they found good conditions to train and practice, and in Hawkstone and Lacapelle both got good results. Last year we had a new bike and, as our riders missed several GPs and were not playing any important position in the series, we already started to introduce some upgrades already during the races.

"This winter we again improved the bike; we had some feedback from the riders and also share experience with KHI in Japan and our technical partners. We were pretty unlucky with injuries in recent seasons; unfortunately injuries are part motocross and we can‰Ûªt do anything to change that so we just expect to have both riders at the start of all the races. They have a good feeling with the bike, so let‰Ûªs hope that we‰Ûªll see some green bikes in front of the MXGP class,‰Û