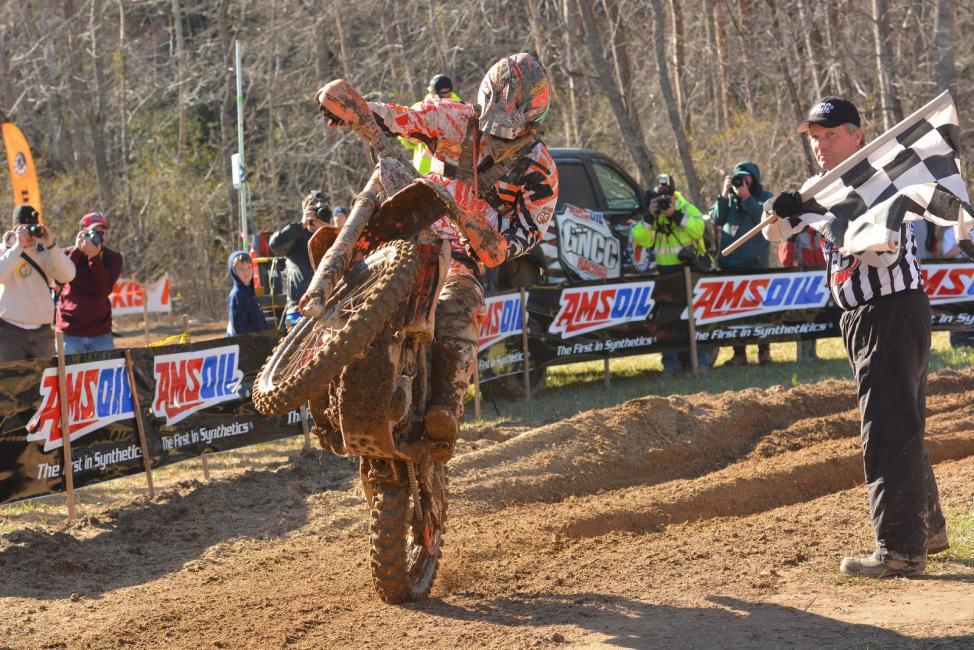 Following a day's worth of rainfall in Morganton, N.C., Round 3 of the 2014 AMSOIL Grand National Cross Country Series presented by Maxxis, an AMA National Championship, showcased another challenging mud race at the 15th running of the FMF Steele Creek GNCC on Sunday.

It was the 2013 GNCC Champion Kailub Russell who prevailed in the end, closing the gap to only three points behind his teammate Charlie Mullins in the overall championship chase.

It was a Factory FMF/KTM sweep on the opening lap as Steward Baylor grabbed the $250 All Balls Racing XC1 Holeshot Award before immediately hooking up with Russell out front. By the time Mullins was settled in the second place spot, Russell had put over one minute on his teammate and the rest of the field and the reigning champ never looked back. 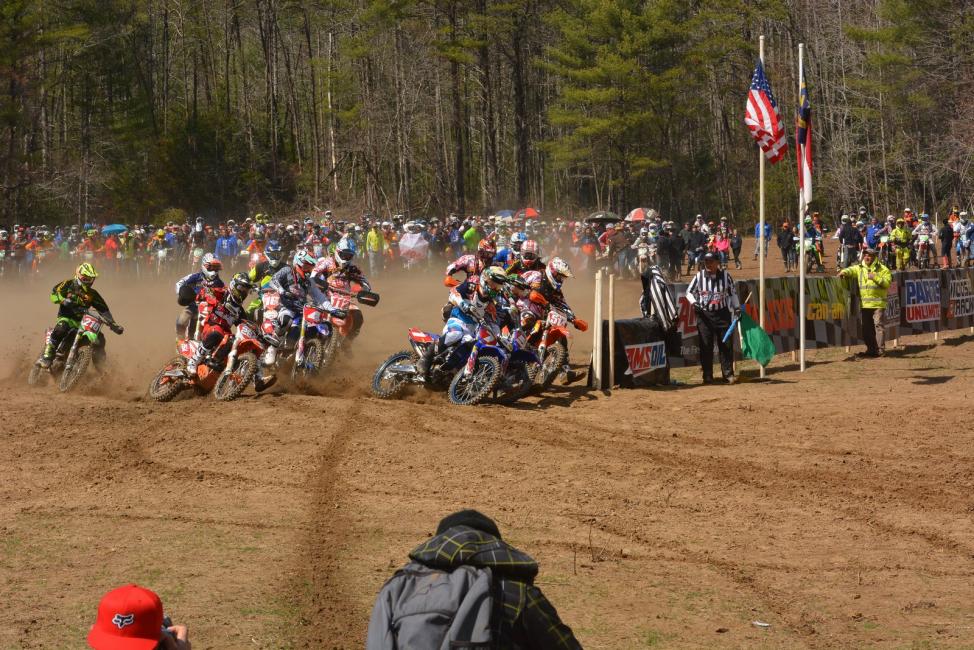 Baylor grabbed the XC1 Holeshot, but was immediately met by Russell out front - Credit: Ken Hill
Mullins would hold tight for the second place position, despite heavy pressure from Australian native Josh Strang on the final lap.

"I tried to ride good and charge but I wasn't really making up any ground," Mullins said. "I rode as hard as I could. On the second to last lap I had a pretty good crash in the sand and Strang caught up to me. He kept me honest that last lap and I had to push pretty hard to keep him back."

Rocky Mountain ATV*MC/N-Fab Am Pro Yamaha's Josh Strang began the afternoon just inside the top 10 but the 2011 Steele Creek winner quickly pushed his way through the pack. Strang caught Mullins just after the two-lap card fell, and after a hard fought attempt at claiming second place, Strang came through the finish just 20 seconds behind Mullins to capture third place overall for the day. 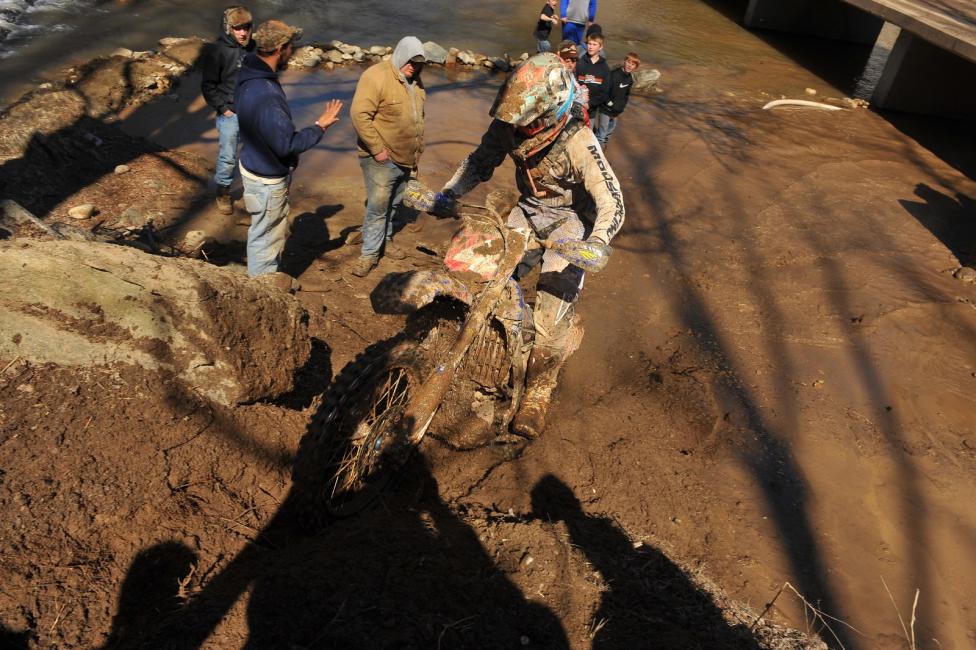 Strang quickly fought his way through the pack at Steele Creek - Credit: Ken Hill
"It took a while to get going out there," Strang said. "The last couple of laps felt pretty good. I caught up to Charlie on the last lap but I just couldn't get by him. But all in all it was a good day. Podiums are always nice but it's been two years since I've won a GNCC, I'm ready for a win!"

RideMPS.com/AMSOIL/Honda's Thad DuVall didn't get the most desirable start but the West Virginia native put his head down and charged his way through the pack early on. Duvall commented after the race, "I lost my front brakes right off the bat, I don't know if there was a bubble in the line or what."

Despite not having front brakes throughout the first half of the race, Duvall managed to work his way into the top five. On the final lap, Duvall made the pass on FMF/KTM's Steward Baylor, where he threw down the $150 KR4 Performance Fastest Lap on the sixth and final lap.

Baylor earned his best finish of the season with fifth overall for the day, as well as fifth place in the XC1 Pro Class. Another minute behind was N-Fab AmPro Yamaha's Jordan Ashburn in the sixth place spot. 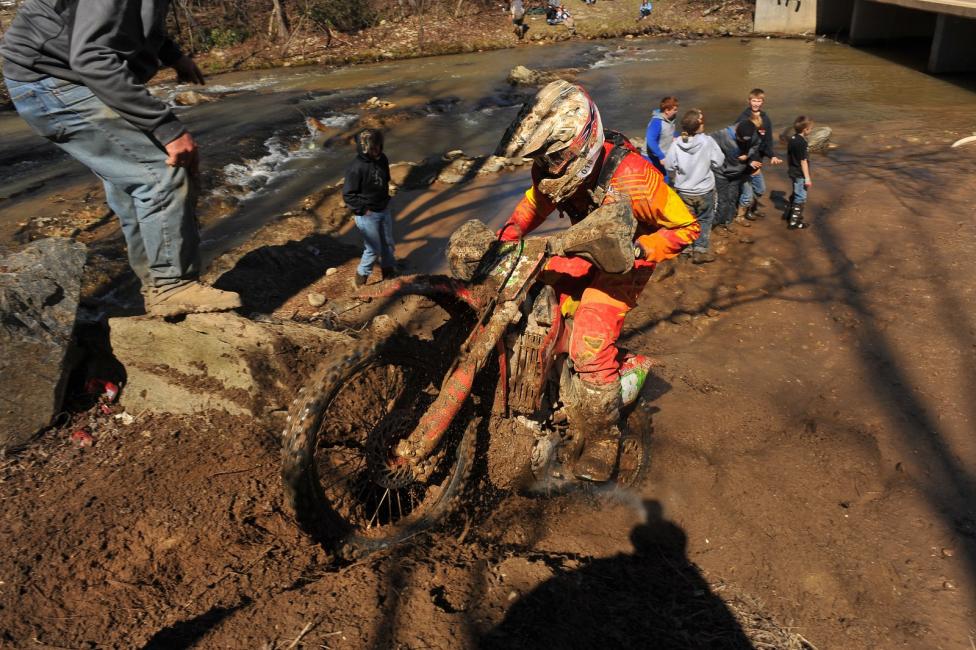 "This is a dream come true," Bollinger said. "This is what I've been working toward for so many years and I still can't believe I finally proved to myself that I could do it and that I belong here."

Mead held the second place position until the final lap when the New Zealand native was reportedly involved in a single rider accident. Rory was airlifted to a local hospital and GNCC personnel are currently awaiting an update on his condition as of Sunday evening. 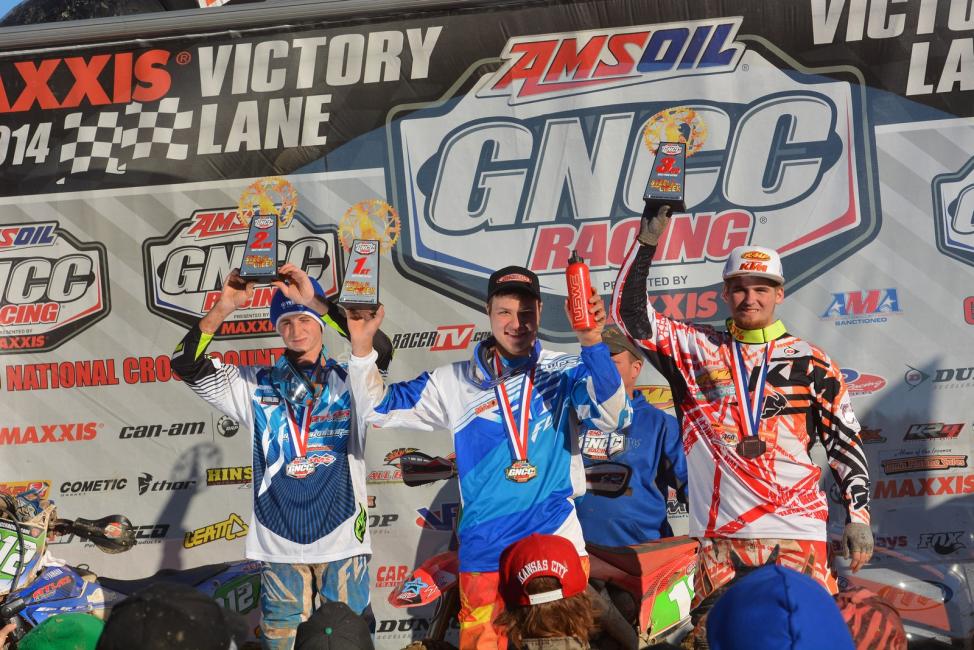 Top Image: Russell had his second straight victory at Steele Creek, closing the points gap to only three behind teammate Charlie Mullins