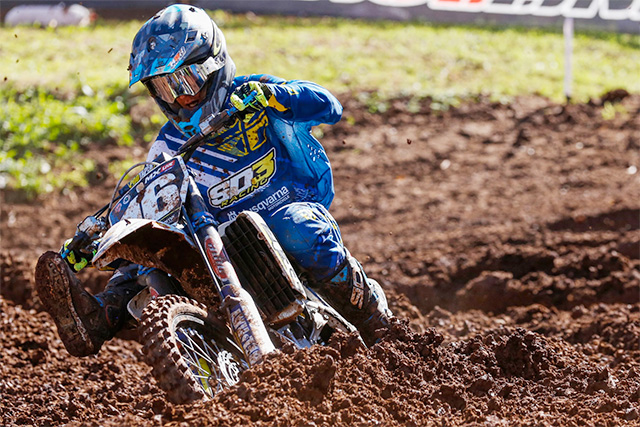 Pirelli MXD class charger Kaleb Barham had his first hit-out in the Motul MX2 class last weekend at Round 9 of the 2017 Motul MX Nationals in Toowomba.

The Toowoomba racer, who amassed 6 MXD podiums including two wins for 7th overall in 2017 was riding at his home track of Echo Valley before a small army of family and friends, and cracked the top ten straight off the bat, setting the eighth-fastest qualifying time.

The SD3 Husqvarna rider had a small throttle problem in the opening moto and nursed it home to ninth after running as high as third in the first two laps, then started mid-pack in the second race, before moving forward to eighth, to be ninth on the day.

"I love racing at Toowoomba because I really enjoy the track, and it formed up to be one of the gnarliest, steepest, rutted tracks of the year so far. It was a really interesting fast-paced track and I had an awesome home-town crowd with all the little kids running around," Barham enthused.

"My first MX2 race was an awesome experience. There were some nerves but I got off to a ripper start in my first one, but had a little problem with my throttle and had to nurse it a little bit and ended up ninth. I learned a lot from it though and kind of got an idea of the pace.

"They swing off it for the whole 30 minutes, but that‰Ûªs a goal I can work towards next year, just going into Coolum and having some fun. In the second one I just rode the stocker and didn‰Ûªt get the start unfortunately, but I worked my way through to eighth in that one, so that was good.

"I‰Ûªll keep on learning up there and then be head down and bum up training ‰ÛÒ I‰Ûªm definitely looking forward to next year," Barham concluded.