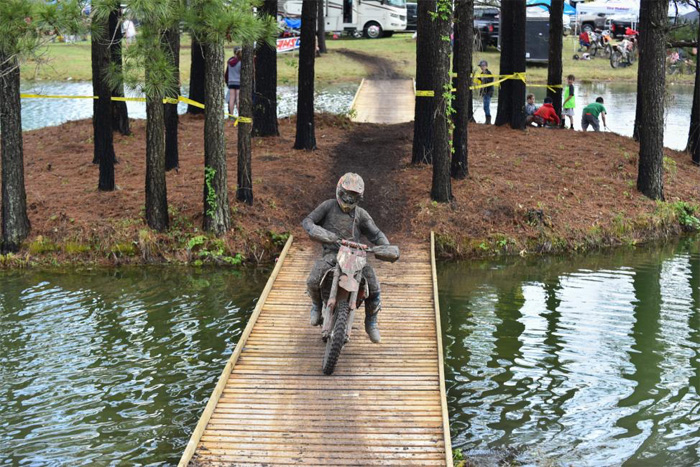 The new venue located in Society Hill, South Carolina was an instant hit among racers and fans, but the lighting storm also made quite the impression forcing the race being cut short to two hours to accommodate the deteriorating track that quickly became impassable with the substantial amount of rain that occurred prior to the start.

The GNCC Track Crew worked diligently to completely re-route the race track for the 1 p.m. pro race, and once the checkered flag flew on the grueling six-lap race it was FMF/KTM Factory Racing's Kailub Russell who landed on the middle of the box and took home the inaugural win.

Once the green flag dropped, it was Rockstar Energy Husqvarna Factory Racing/Bel-Ray's Josh Strang who jumped out to the early lead claiming the $250 All Balls Racing Holeshot Award. With Russell stuck in a mid-pack position, Strang looked to capitalize on the early lead. However, Russell knew that he had to quickly pass the rest of the field while they were still grouped together on the first lap.

The three-time champion was able to adjust to the changing track conditions and make his way to the lead once he checked into timing and scoring for the first time.

"I had a good jump off the line but locked bars with Strang and that pushed me wide in the start," said Russell. "I knew I had to get around the guys in front of me because I could tell I was running out of roll-offs.

"The guys were zig zagging through the track and I just pinned it and went straight through everything. It was surreal how fast I got around them and pulled a lead. I was expecting the worst going out there but the track wasn't that bad."

Meanwhile, Strang fell to the back of the pack after getting stuck in a mud hole, which allowed for JCR Honda/Lucas Oil/Maxxis/FLY Racing's Chris Bach to move into the second place position. There was a battle brewing behind Bach, where Westfield Powersports KTM Presented by Moose Racing's Jordan Ashburn and Rocky Mountain ATV*MC/KR4/FAR Racing Husqvarna's Thad Duvall were pushing themselves and quickly catching the leader. 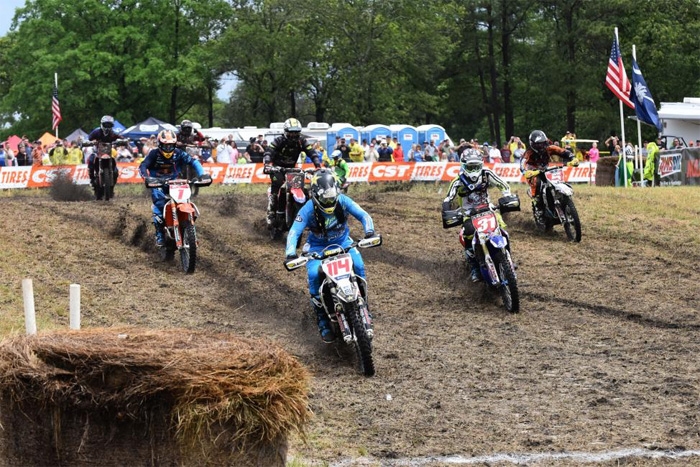 Josh Strang got out to the early lead claiming the $250 All Balls Racing Holeshot Award. - Photo: Ken Hill
The race between Ashburn and Duvall would allow them to set some of the fastest lap times of the entire day while passing Bach and Obermeyer/MCS Racing Suzuki/Kenda/Fly Racing's Ricky Russell. Kailub Russell still managed to have a commanding lead on the rest of the XC1 Pro field during the halfway point of the race.

With Duvall on his back wheel, Ashburn was able to shave 40 seconds off his lap time en route for the lead on the third lap, but Russell was never visible due to his dominate 20 second lead. Once Russell crossed the finish line and claimed the inaugural win it would take 40 seconds for second place to check in.

"I rode in sand a lot this winter when I just started back riding," said Russell. "The woods were super fun, it was sandy but all the rain brought some dirt to the top. It was probably the most fun I've had racing in a couple of years to be honest. The track had a great flow and when you're having fun it just turns into riding fast, and that's what happened today."

Duvall would continue pushing Ashburn through the remainder of the race and occasionally be right beside him battling wheel-to-wheel. Once the finish line was in sight it was an all-out race between Ashburn and Duvall, creating some of the best racing thus far in the season. While it was anyone's game for the second podium position, Ashburn was able to look far enough ahead and pick the right lines to hold on to the spot. Duvall would cross the line just two seconds behind Ashburn in third.

"I got a bad start and struggled the first couple of laps trying to get around everyone," said Ashburn. "Once I got up to second Thad was right behind me and he continued pushing me the whole race. My main goal was to not make any mistakes and it feels great to finally get back on the podium."

Bach held on to fourth, with SRT/KTM/Kenda Tires-backed Steward Baylor Jr. putting in an impressive ride for fifth overall. Strang was able to make his way back up to sixth and finished tenth overall.

West Virginia's Zach Nolan finished 15th overall along with his 250 A class win, a result that was good enough to earn him the overall amateur honors.

In the XC2 Pro Lites division, Coastal Racing/Husqvarna/MSR's Craig Delong added another $125 Hot Cams Holeshot Award to his resume, but his teammate Layne Michael took home his first win of the season after completing a consistent race.

N-Fab AmPro Yamaha's Nick Davis managed to work his way from a dead last start to follow in second. After grabbing the holeshot, Delong would fall back to 12th on the first lap and recover to round out the podium in third. Trail Jesters Racing's Ben Kelley and Kentucky native Vance Francis complete the top five. The current XC2 Pro Lites points leader, JCR Honda/Lucas Oil/Maxxis/FLY Racing's Trevor Bollinger, had a mechanical issue and had to get towed back to his pits ultimately taking him out of the race. 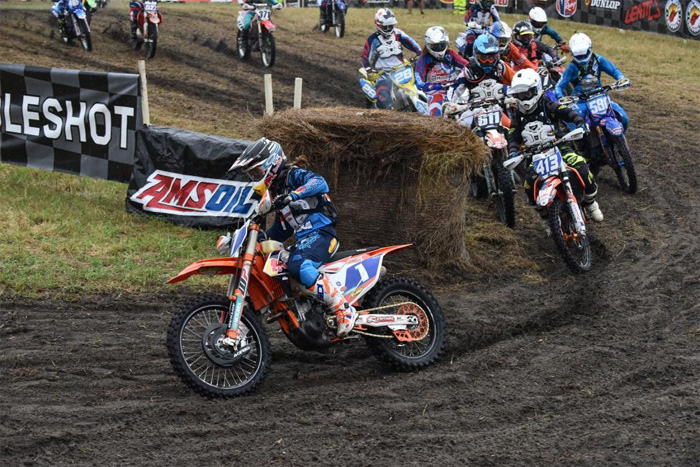 Australian Mackenzie Tricker (#28) worked her way through the pack to earn the WXC and 10 a.m. overall win - Photo: Ken Hill
The 10 a.m. race faced perhaps the worst track conditions of the day with pouring rain forcing the racers to use their utmost skill level to power through the mud. Obermeyer/MCS Racing Suzuki/Kenda/Fly Racing's Makenzie Tricker would make a last minute pass on Bonzi/RideMPS.com/Yamaha-backed Brooke Cosner to claim the WXC and overall win, with Cosner holding the second place position.

After leading the first lap of the race, N-Fab/AmPro Yamaha's Tayla Jones Australian import rounded out the top three.

The 2016 AMSOIL Grand National Cross Country Series resumes May 14 and 15 with the Limestone 100 GNCC in Springville, Indiana. 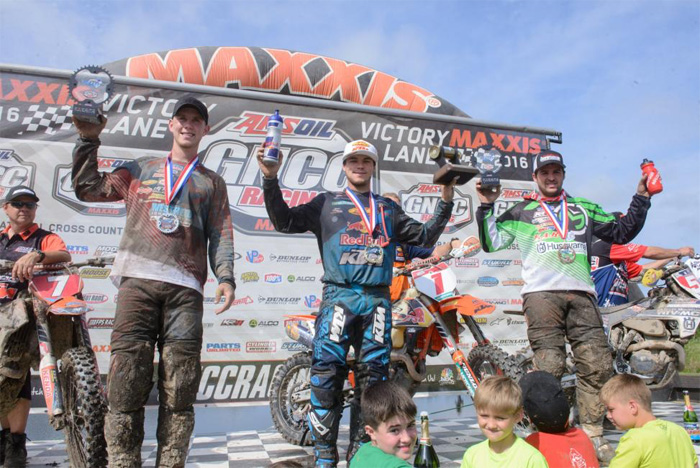