At the conclusion of the seven-lap race it was FMF/KTM Factory Racing's Kailub Russell who took home the win in Society Hill, South Carolina.

Rockstar Energy/Factory Husqvarna Racing's Josh Strang jumped out to the early lead grabbing his third $250 All Balls Racing Holeshot Award of the year. N-Fab/AmPro Yamaha's Ricky Russell accompanied Strang as they headed out of the first turn.

Strang's teammate, Thad Duvall, also got off to a favorable start and made his way to the lead position by the two-mile mark. Duvall continued charging where he began to pull a gap on Strang and R Russell.
Thad Duvall's ride at the CST Tires Camp Coker Bullet GNCC proved he's hungry for the top spot of the box. Credit: Ken Hill
R Russell made the pass for second on the Camp Coker motocross track, and by this time K Russell wasn't far behind the podium contenders. Strang would also lose another position in the sand rollers to K Russell who was moving through the pack quick. By the conclusion of the second lap K Russell sat in second while Duvall maintained control of the lead.

Duvall and K Russell maintained a consistent 20 second gap between themselves on the second lap, while R Russell found himself in a heated battle with Beta USA's Jordan Ashburn. Before long, SRT/KTM's Steward Baylor also found himself in the mix with R Russell and Ashburn.

R Russell succumbd to the pressure of Ashburn in the final second of the moto track. With a semi-clear path, Ashburn began to separate himself from Baylor who now rode in fourth.

K Russell began to gain on Duvall around the mid-way point of the race after the dup both stopped for a regular pit stop. With much of the focus on Duvall and K Russell, Baylor managed to slide his way into a podium position and begin to make up for lost time. 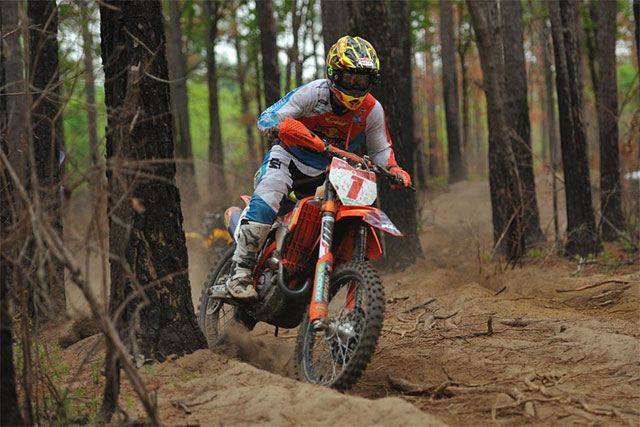 Kailub Russell rode majority of the race in the runner-up position until the white flag lap. Credit: Ken Hill
Once the two-lap board was out, Duvall and K Russell were rubbing plastic as they approached the pro pits. K Russell made the pass for the lead, but pulled in his pit for a splash of gas, while Duvall neglected to stop where he took back over the lead.

With only four miles remaining in the race, K Russell stole the lead away from Duvall. After leading the past six laps, Duvall didn't stop the fight until disaster struck and he ran out of gas on the motocross track. A KTM crew member was quick to help Duvall and he was back on-track before Baylor could catch up.

Duvall rode the next mile until approaching his team members who gave him another quick fill up to get him through the rest of the course. After following Duvall the whole race, K Russell crossed the finish line in a champion fashion, taking his fourth-straight overall win. Duvall and Baylor rounded out the overall podium. 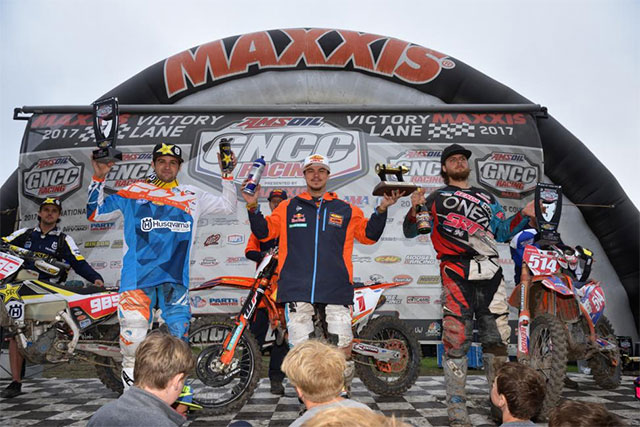 *Provisional* Overall Podium: (2) Thad Duvall, (1) Kailub Russell, (3) Steward Baylor. Credit: Ken Hill
As a result of a rule violation, the overall results from today are provisional and pending approval of additional evidence. R Russell had his best finish of the season where he finished just off the podium in fourth. After getting the holeshot, Strang rounded out the top-five overall.

"It was a good day, I just wasn't flowing at the beginning, those guys gapped me in the first lap and a half and once I got to second I knew I was going to have my work cut out for me, but I just put my head down and kept charging," said K Russell. "I went to work all day, chipped away at it and never gave up. Thad was riding well so it's going to be an interesting rest of the season for sure. These guys are keeping me on my toes and making me strive a little harder so it's time to raise the bar again and it's time to get better."

The XC2 250 Pro division saw some of the closest racing action all day. In the end it would be the N-Fab/AmPro Yamaha rider Josh Toth taking his fifth win of the season. Solid Performance KTM's Jesse Groemm made his way back to the podium in second, and Coastal Racing/Husqvarna's Craig Delong worked his way from outside the top ten to round out the overall podium in third. Josh Toth had his work cut out for him, but the Yamaha rider rode away with his fifth-straight XC2 250 Pro class win in the Palmetto State. Credit: Ken Hill
The FMF XC3 125 Pro-Am class podium had a shake-up with Jason Thomas taking the top spot on the box. Thomas excelled under pressure from Coastal Racing/Husqvarna and current points leader Jack Edmondson who had to settle for second. SRT/KTM's Mark Heresco Jr. followed in third.