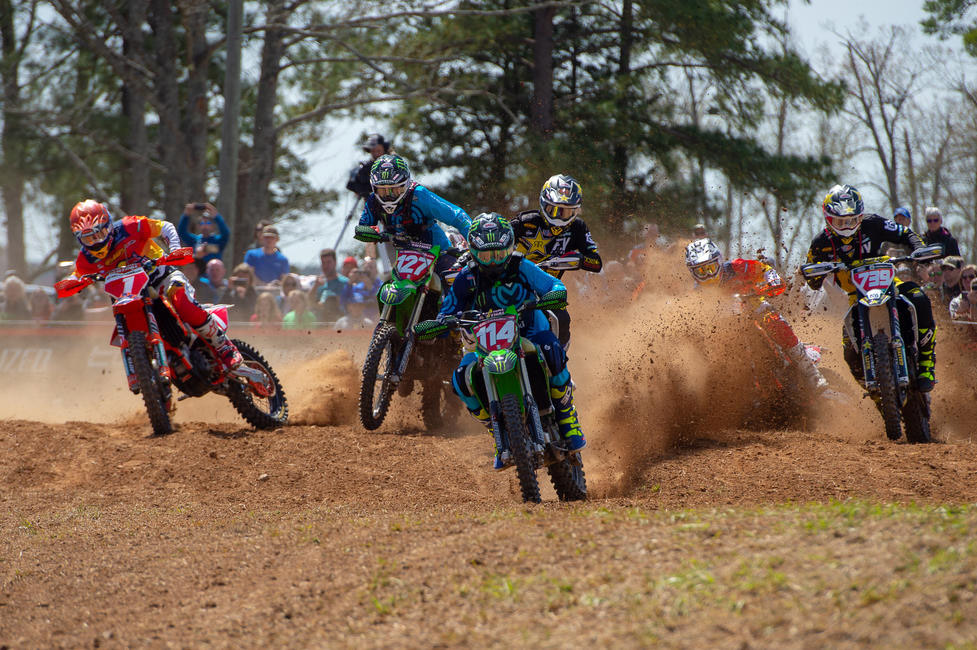 As the race got underway it was Babbitt's Online/Monster Energy/Kawasaki's Josh Strang grabbed the $250 All Balls Racing holeshot award. However, it was FMF/KTM Factory Racing's Kailub Russell pushing his way to the front of the pack as they came through timing and scoring on the opening lap. Russell continued his pursuit for his first victory of the season, batting with the Rockstar Energy/Factory Husqvarna Racing duo of Trevor Bollinger and Thad Duvall. 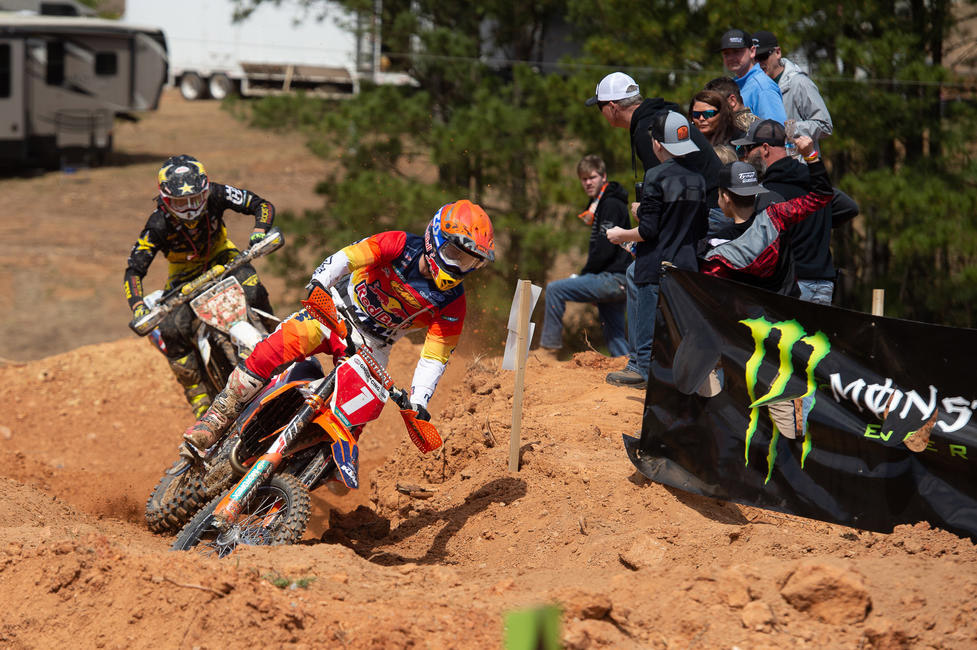 Kailub Russell (1) and Trevor Bollinger battled back and forth throughout the day, Russell would take the win with Bollinger in second. Photo: Ken Hill
Bollinger made the pass on Russell, holding the lead spot as they came through scoring on the second and fourth laps. Bollinger then held off teammate Duvall at the end of the race to place second overall. Duvall battled back after a fourth place start, holding the second place position as the two-lap card and white flag came out. However, a crash late in the race had Duvall digging deep to salvage points as he came through the finish in third overall.

For Russell it was time to push when he found himself in the third place position as the two lap card came out. Russell was able to make the pass for the lead stick as he put his head down and focused on the remaining miles ahead of him. As the checkered flag flew, Russell had placed a 13 second gap on Bollinger for his first win of the season. 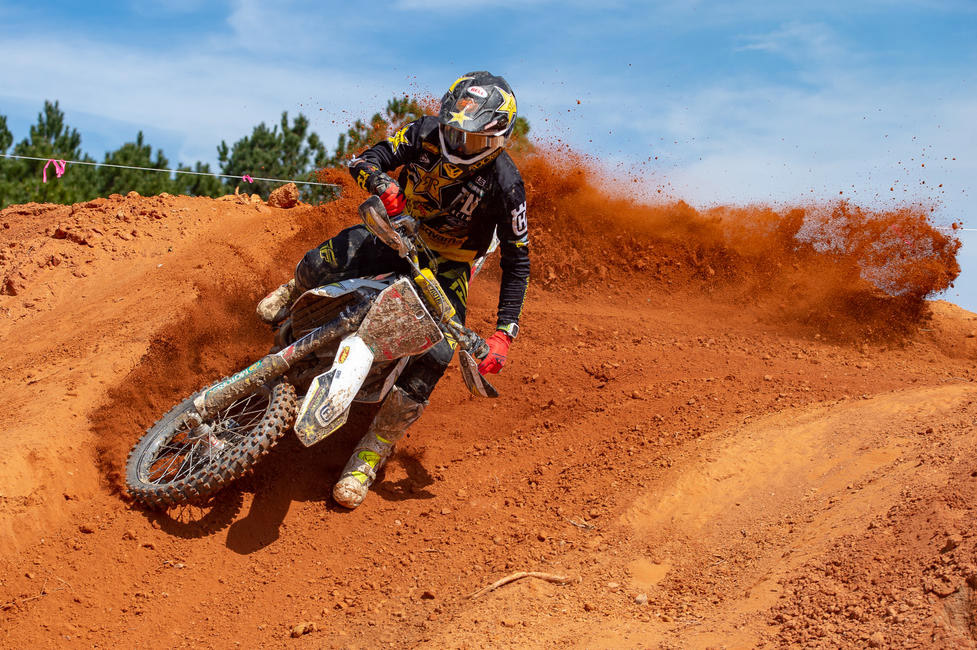 Thad Duvall would battle at the front, but after a late race crash he would finish in the third place position. Photo: Ken Hill
After earning the win one week ago, Steward Baylor Jr. found himself running in fourth overall for the majority of the race. Baylor Jr. held a consistent pace all day and now sits second, just seven points behind Russell, in the National Championship points standings.

After earning the holeshot and heading into the woods Strang battled throughout the day to stay inside the top five overall. Battling with Strang was Josh Toth, who had to make his way through the riders after an eighth place start to the day. Strang and Toth swapped the sixth and fifth place position several times before the conclusion of the three hour race. With just a few more miles to go, Strang struck making the pass on Toth for fifth overall. Toth ultimately ended up in sixth overall.

Strang's teammate, Jordan Ashburn held onto seventh in the XC1 Open Pro class with an eighth overall at the second round in Georgia. Ashburn held fifth overall on the second lap, but would fall to seventh for the remaining laps. Phoenix Honda Racing's Andrew Delong had another good ride, finishing eighth in class and ninth overall. 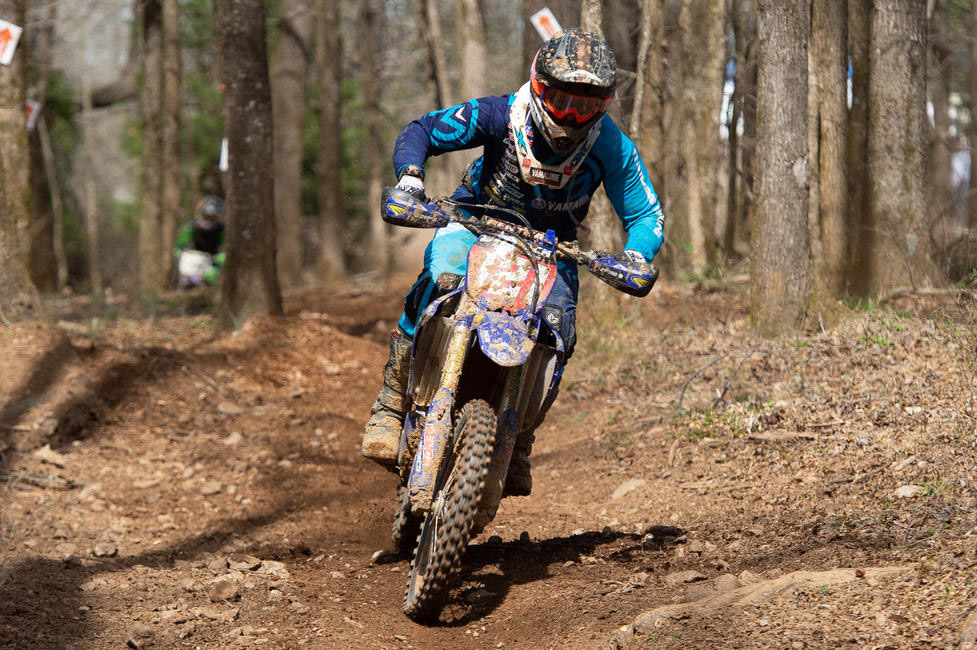 Cory Buttrick returned to the GNCC Series as AmPro Yamaha's fill-in rider, placing ninth in the XC1 Open Pro class. Photo: Ken Hill
As Ricky Russell remains sidelined with an injury, the AmPro Yamaha team headed to Georgia with a familiar face to GNCC Racing, the #121 of Cory Buttrick. Buttrick has a very long history in the GNCC series, and the team was impressed with how he finished out the 2018 season tenth in points as a privateer. Yesterday, Buttrick had a consistent race coming through for a top 10 finish in the XC1 Open Pro class.

As the 10 a.m. race took off it was Rockstar/Husqvarna/Moose Racing/Shaw Wines Tayla Jones holding onto the early lead. However, as the women headed out on the third lap Fly/Maxxis/Pro Circuit/KTM's Becca Sheets made her move to take over the lead, with KTM/MEPMX/Fly Racing's Mackenzie Tricker following her as she moved into the second place position. Sheets would hold onto the lead, taking the checkered flag with Tricker in second and Jones rounding out the top three. Beta USA Factory racer, Rachel Gutish had a consistent race finishing fourth in WXC followed by New Zealand's Rachael Archer rounding out the top five.

The 2019 GNCC Series returns in two weeks, March 30 and 31, with the FMF Steele Creek in Morganton, North Carolina. This event will also feature round two of the Specialized Turbo eMTB GNCC National Championship. 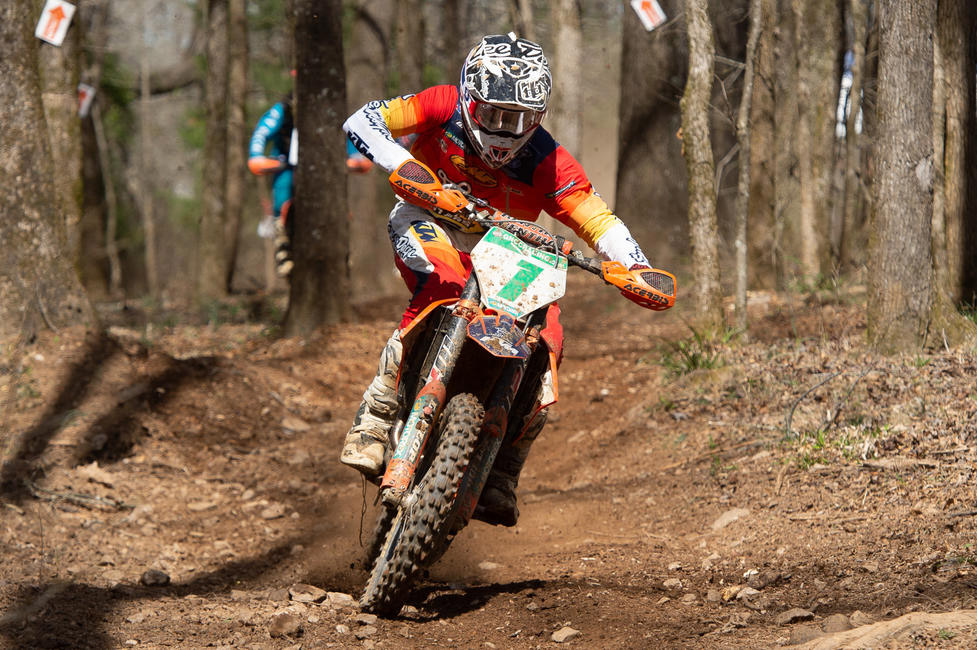