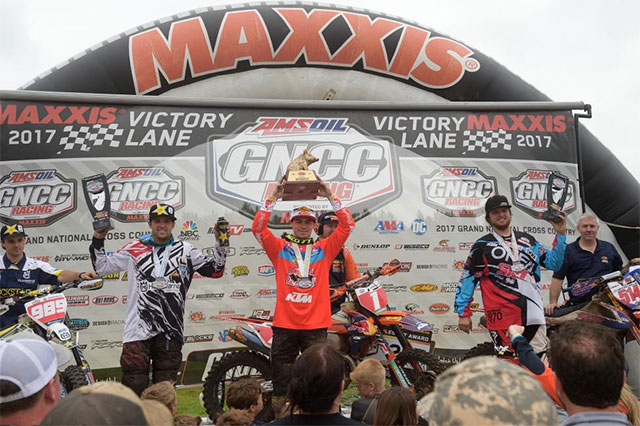 At the end of the rainy three-hour race, it was FMF/KTM Factory Racing's Kailub Russell who stood atop of the podium victorious at the Moose Racing Wild Boar GNCC.

While K Russell jumped out to grab the early lead and the $250 All Balls Racing XC1 Open Pro Holeshot Award, it was N-Fab/AmPro Yamaha's Ricky Russell who lead the way for majority of the first lap. Shortly after the race began, conditions took a turn for the worst when heavy rain started. Although rain was forecasted, in the minutes leading up to the start the skies were clear and temperatures were warm. Many of the riders were optimistic and weren't properly prepared for the sudden change in weather.

JCR Honda's Trevor Bollinger had a late start after his chain fell off on the starting line. As the top five completed the first lap, they had a large gap on Husqvarna-mounted rider Tyler Medaglia who was sitting in the sixth place position. R Russell continued to lead the way, while his opponents swapped positions behind him. R Russell began to feel pressure from Coastal Racing/Husqvarna's Ryan Sipes. 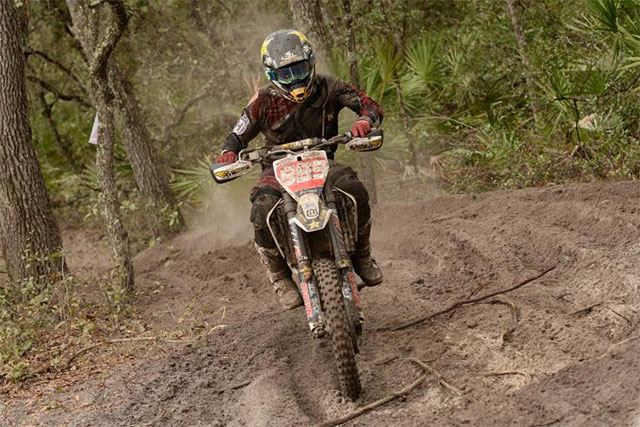 After ending his race early at the season opener, Thad Duvall came back looking for revenge where he finished second at the Moose Racing Wild Boar GNCC. Credit: Ken Hill
The second lap saw quite the shake-up where Rockstar Energy/Factory Husqvarna Racing's Thad Duvall took over second and Sipes fell back to fourth. Throughout the entirety of the race, different pit strategies were put to the test. When the race reached the halfway point, the top five riders pitted with the exception of K Russell, where he managed to go from fourth to second in the short span of the VP Racing Fuels Pro Row. After avoiding the stop, K Russell made quick work to make the pass on Duvall.

Once the two-lap card was out Sipes was overseeing the final podium position, even after being stuck behind some lapped riders in the infamous Hog Waller mud hole. Even more bad luck would plaque Sipes later in the same lap. Shortly after the FMF Powerpoint, Sipes came together with a lapped rider and went down. Unfortunately, when Sipes went down the front of his hip made contact with the foot peg. Sipes immediately got back up and took off charging hard, but the brutality of the pain would be too much, and Sipes was forced to pull off the track and request help. Coastal Racing team manager, Barry Hark, reported that, "At this point we know nothing is broken, but Sipes is bruised pretty severely." 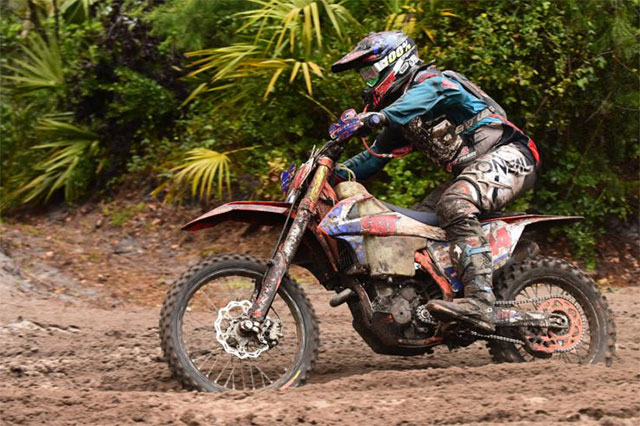 Steward Baylor leaves Florida with two podium finishes behind him. Credit: Ken Hill
With the focus being on who was going to land a spot on the podium, SRT/KTM's Steward Baylor quietly worked his way through the pack to a top-five position on the fourth lap. Even with a few tip overs himself, Baylor took advantage of Sipes misfortune and slid into third with two laps remaining.

Duvall continued to hang right with the four-time GNCC champion, K Russell, where the pair battled wheel-to-wheel on the last lap. As they continued to push each other, they lost sight of Baylor in third. Russell would end up crossing the line victorious, a mere two seconds ahead of Duvall in second. Baylor held onto third, earning his second podium of the year.

"I was kicking myself for not putting roll-off goggles on in the beginning. I saw the clouds coming and I was optimistic, but it started pouring on the first lap," said Russell. "I just started pulling tear-offs left and right and then I couldn't see because of the mud and water in my goggles. I fell over and made a few mistakes, and got passed by a few of the guys, but the rain helped keep the track intact." 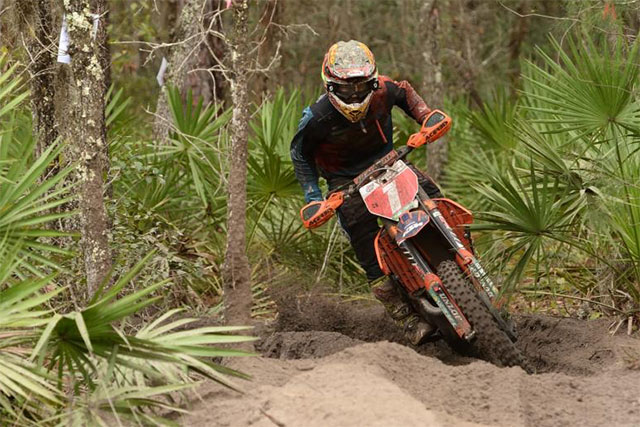 The 2017 AMSOIL GNCC Series resumes in two weeks, March 25 and 26, with the Second Annual Maxxis Cannonball GNCC in Sparta, Georgia. 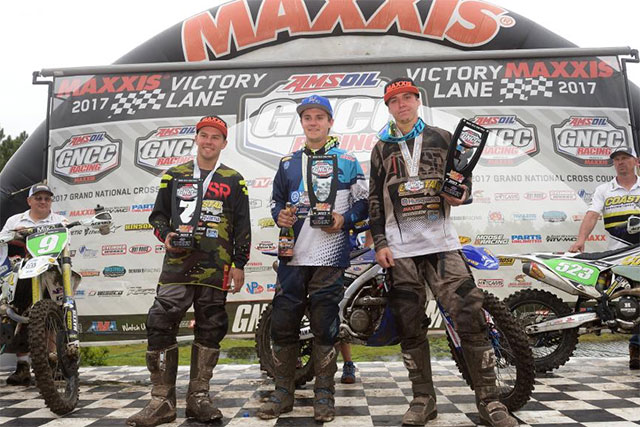