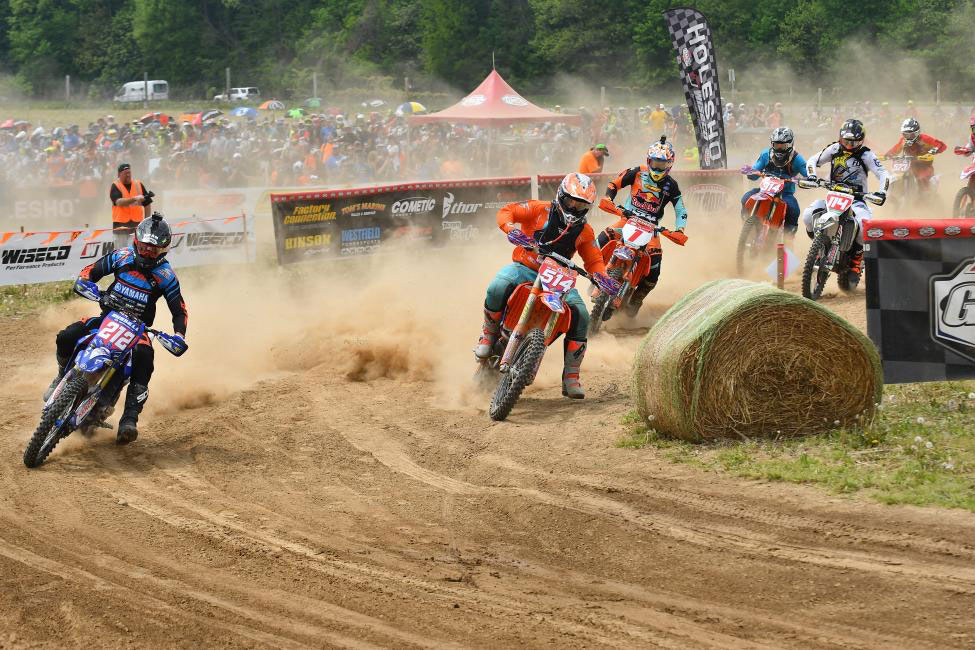 Partly sunny and dry conditions welcomed riders, which was a complete turnaround from last year's race conditions. At the conclusion of the seven-lap race it was FMF/KTM Factory Racing's Kailub Russell who took home the win in Peru, Indiana.

Tely Energy Racing/KTM's Steward Baylor Jr. jumped out to the early lead grabbing the $250 All Balls Racing Holeshot Award. AmPro Yamaha's Ricky Russell accompanied S. Baylor Jr. as they headed out of the first turn and into the woods.

Russell made an early pass on R. Russell for the second place position, and after coming through timing and scoring on lap one S. Baylor Jr. remained first with a seven second lead. Thad Duvall came through in the fourth place position after starting at the back of the pack. 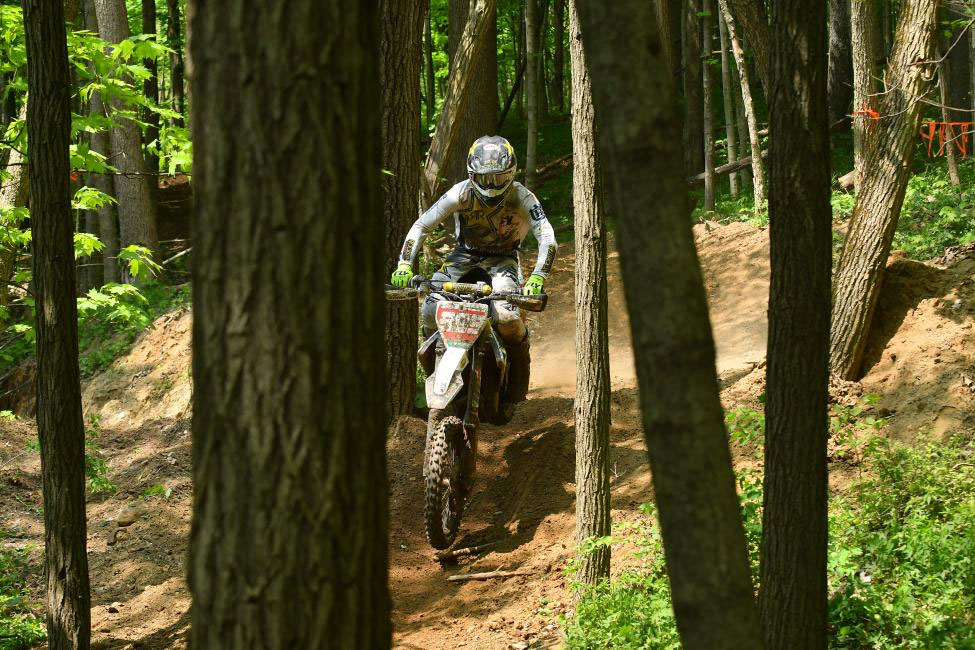 Thad Duvall battled back to earn second overall after a dead last start to the day. Photo - Ken Hill
Halfway through the second lap, news came that K. Russell had moved into the first place position, with Duvall making the move into second just 13 seconds behind the leader. As lap three began, K. Russell, Duvall and R. Russell checked in with S. Baylor dropping back to fourth, and JCR/Honda's Trevor Bollinger coming through in the fifth place position.

As the front of the pack made their way around it was Tely Energy Racing/KTM's Grant Baylor moving up and into the second place position, but after pitting for gas on lap three Duvall made the move around him. R. Russell and S.Baylor Jr. continued to battle for the fourth place position, however S. Baylor made the pass stick and continue to push on for the remaining three laps.

When the white flag flew it was K. Russell leading Duvall by 10 seconds, with G. Baylor behind them in third. S. Baylor Jr. followed by Bollinger and R. Russell were battling with Australian Josh Strang, who sat in the seventh place position during the last lap.

Russell earned his fifth win of the season as he crossed the finish line six seconds ahead of Duvall. G. Baylor had his best finish of the season, earning him a spot on the podium in Indiana. S. Baylor held on for fourth, while Bollinger came through in the fifth spot. Strang made the pass for the sixth place position, putting R. Russell back to seventh at round six. Cory Buttrick finished eighth while teammate, Layne Michael rounded out the top 10. GasGas/FAR's Andrew Delong earned his best finish of the year with a ninth in the XC1 Open Pro class. 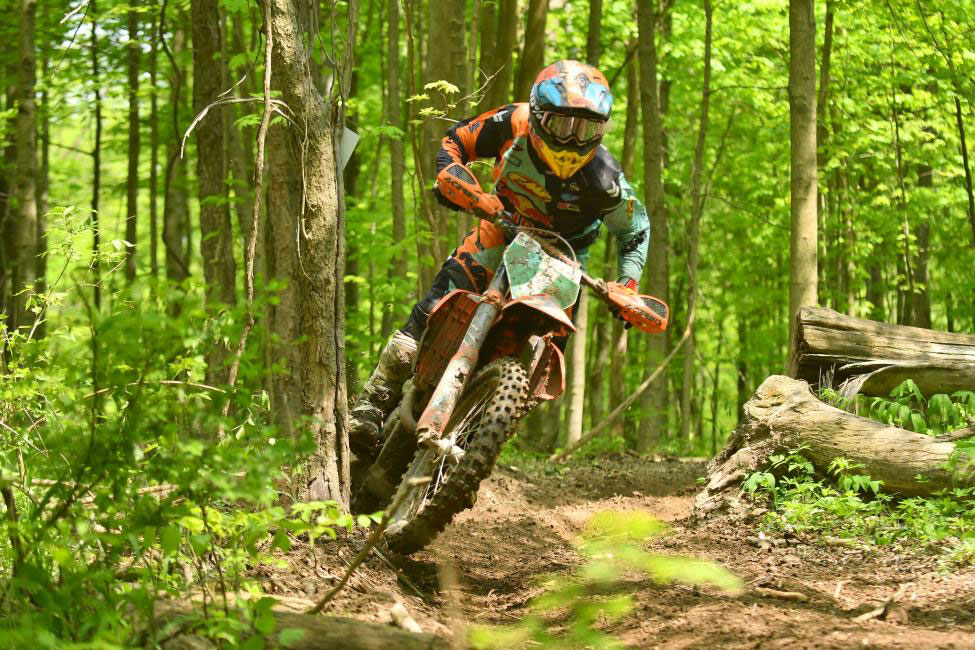 Josh Toth earned the win in the XC2 250 Pro class in Indiana. Photo - Ken Hill
In the XC2 250 Pro class, FMF/KTM Factory Racing's Josh Toth made it his third win of the season, but not without some intense battles throughout the three-hour race. When the green flag flew, it was Fun Center/MSR's Joseph Ferraro taking the $100 XC2 250 Pro Holeshot Award. However, as the XC2 pack came through on the second lap it was M&E Honda/Fly Racing/Alpinestar's Austin Lee leading the way followed by Toth and Craig Delong. After a mid-pack start Trail Jesters/KTM's Ben Kelley made his way through into the fourth place position before picking off riders and making his way to the second place position.

Toth would made the pass on Lee, and remain in the lead until taking the checkered flag on lap seven. Kelley came in eight seconds behind Toth, followed by C. Delong rounding out the podium. Lee held on for fourth, while Beta USA and Indiana-native Mike Witkowski had his best finish with a fifth in the XC2 250 Pro class.

The 2018 AMSOIL Grand National Cross Country Series will heads to Millfield, Ohio on May 26 and 27 for The Wiseco John Penton GNCC. 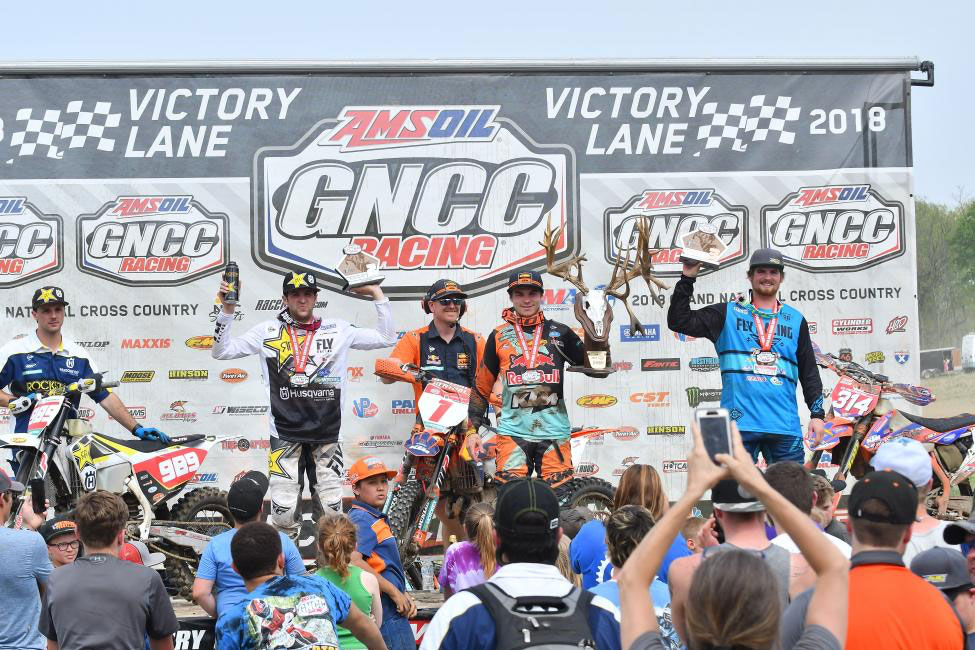