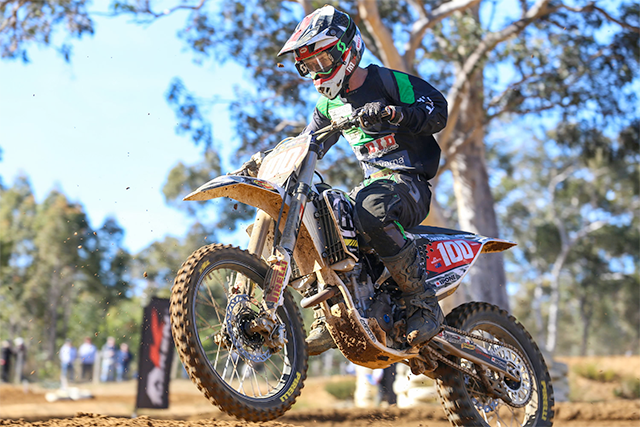 Husqvarna racer Jy Roberts has extended his lead in the Pirelli MXD championship of the MX Nationals series, despite finishing off the podium in yesterday‰Ûªs sixth round of the series at Nowra.

The Robertson‰Ûªs Motorcycles rider and Under 19 championship leader established his speed on the track in practice, qualifying second-fastest behind Kaleb Barham and ahead of Riley Dukes in a Husqvarna FC 250 1-2-3.

As the track began to get choppy, however, the 16-year-old encountered arm pump.

Lacklustre starts exacerbated the situation, but Roberts still managed to battle his way to fourth in the opener and a highly impressive sixth in the second - after coming from the very back of the pack - to be fifth for the day.

Rookie Callum Norton won the MXD category on the day, ahead of Hugh McKay and Isaac Ferguson.

"Nowra was alright I guess. I had some really solid laps in practice, but the track got really choppy and I got really bad arm pump, which made the racing hard," Roberts explained.

"I‰Ûªm really happy with how I rode though, with my bad starts ‰ÛÒ definitely made it hard on myself. Moto 1 I was about tenth off the start and then I came back to fourth, then moto 2, I was last off the gate and made my way back up to fourth and just had a couple of crashes and came in sixth or seventh. But I put in some consistent laps and tried to make passes and I ended up extending my lead, so I‰Ûªm stoked with that.

"I went good at Shepparton last year in the Rookies Cup, so I can‰Ûªt wait to go back up there. I loved the dirt and track. I love riding ruts," he concluded.