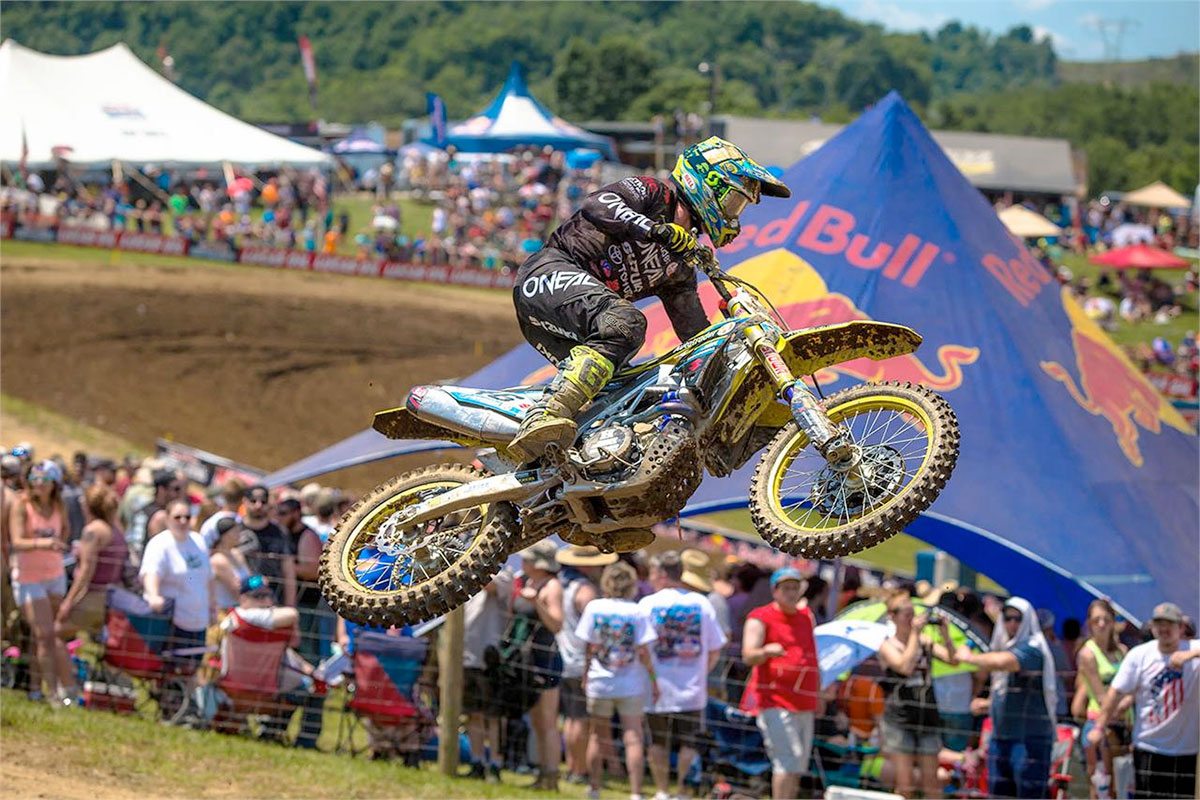 Justin Hill impressed in his 450 class debut with a 4-6 score card from the two motos contested to finish 5th overall on debut.
Suzuki's Justin Hill finished a strong fifth in his 450 National debut at round four of the 2018 Lucas Oil Pro Motocross Championship at High Point Raceway.

Last week it was announced that Team Manager Jeremy Albrecht made the decision to promote Hill to the 450 class in the absence of the injured Justin Bogle. It was a brilliant move. Hill, who will move up to the 450 class on a full-time basis in 2019, looked like a natural fit on the Suzuki RM-Z450.

The Yoncalla, Oregon native qualified sixth-fastest in combined qualifying, and rocketed out of the gate in the opening moto, riding his #46 RM-Z450 up to fourth place by the flag. Hill backed-up that performance by charging from 11th to sixth in the second moto for fifth overall. He will again campaign the RM-Z450 this coming weekend at the Muddy Creek National in Tennessee.

‰ÛÏHigh Point was gnarly. You could not go around a single section without your teeth rattling out of your head," the Autotrader/ Yoshimura/ Suzuki Factory Racing Team rider explained. "It was not my style of track. It was less about technique and more about powering through everything.

"I feel like Muddy Creek will be more my style. Historically, I haven‰Ûªt done well at High Point, so I am happy to get out of there with a top-five finish. I had a brake issue in the second moto, so I wasn‰Ûªt able to catch up to fifth place, but I was running a decent pace. My first 450 National taught me that I have to make things happen right away. I didn‰Ûªt get the holeshot in either moto, but I tried to make good moves and work toward the front," Hill concluded.

‰ÛÏIn the 450 class, Justin Hill had a really good first moto. He was charging forward and making good moves. I‰Ûªm excited to see what Hill can do this weekend at Muddy Creek," Albrecht said.

Hill will be back in action when the fifth round of the series continues less than four hours away from the JGRMX race shop, the Muddy Creek National in Blountville, Tennessee is the closest National for the team.