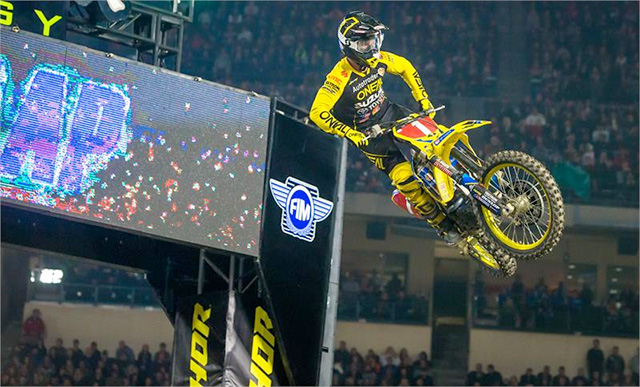 Defending 250 West Supercross Champion, Justin Hill, locked down the fastest qualifying time at the opening round of the 2018 AMA/ FIM World Supercross series at Angel Stadium in Anaheim, California, but tightness and nerves halted his advance in the 250 Main.

‰ÛÏBeing the fastest qualifier was a good start to the season. Unfortunately, I tightened up in the Main Event and rode like a dummy. You can‰Ûªt win races when gripping the bike like a gorilla," Hill bluntly said.

"I was trying to push too hard on the track and making uncharacteristic mistakes. I was trying to make up time in spots where you really couldn‰Ûªt make up time. I needed to chill out and I think that‰Ûªs a result of rustiness from being away from racing for a while. I‰Ûªm excited to work hard this week and fix those mistakes.

‰ÛÏAs far as the RM-Z250, we didn‰Ûªt make any drastic changes to it. We made a difference with the gearing, and the engine tuners did some mapping adjustments to the engine. Those changes were helpful. We also changed the position of the starting device. I noticed an improvement, although my gate for the Main wasn‰Ûªt that great. There were a couple of inside gates available, but they looked like I would get squeezed off, so I elected for an outside gate. That was a bad call on my part," Hill concluded.

"Justin Hill rode well, but got arm-pump and made a lot of mistakes," Albrecht said. "I think if Justin would have ‰Û÷gotten a good start then it would have been a completely different Main Event for him. Justin was doing some very technical things around the track, but he was trying too hard."