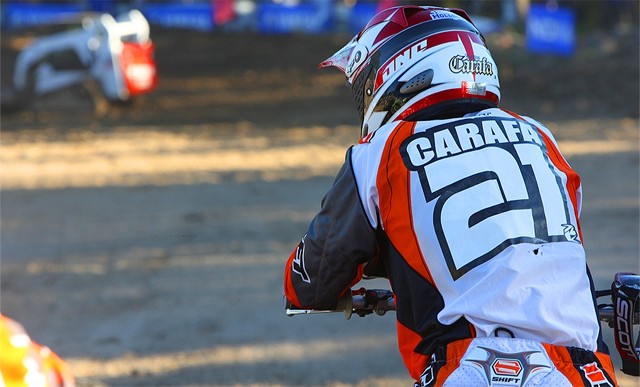 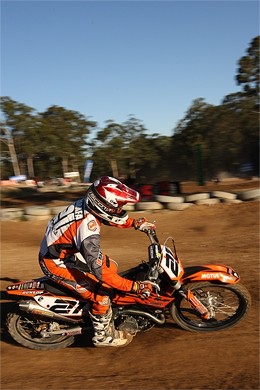 Due to the result of heavy rainfall in Melbourne, the venue of the final round was urgently relocated from Geelong to Melton. In cold, wet conditions young Carafa nearly ended his day early after a mishap in practice that caused damage to his machine. With the repairs made, Carafa headed into the first moto only to have a race he would rather forget, crashing numerous times.

"I seriously thought the Championship was over for me after that race, so I went into the next moto with caution, simply to pick up points." Carafa reflected.

“I seriously thought the Championship was over for me after that race, so I went into the next moto with caution, simply to pick up points.” Carafa placed 6th in the second moto and in the final race of the day, led for much of the moto with Kade Mosig, HRA coming through for the moto win.

It was only at the presentation that Carafa realized he had won the series. Team Manager Glenn Macdonald said “I was on the phone to Justin checking in to see how he rode, which just happened to be during the presentation and mid-way through our conversation we heard second place called out and he jumped in and said ‘It’s me…I won!’ You could hear the excitement in his voice as he hung up on me to make his speech!”

Justin commented after the event “It has been a really exciting year for me. It is my first year in Pro Open and also my first season on KTM’s which has really worked well for me. I finished 11th overall in the Supercross Championships and have now picked up this title so things have really been coming together. I have worked really hard this year on my fitness but I couldn’t have done this without the awesome support of my sponsors, my family and friends. My next goal is to crack the top ten in the National Pro Open Motocross, and with a few rounds of racing to go it is definitely within my reach.”