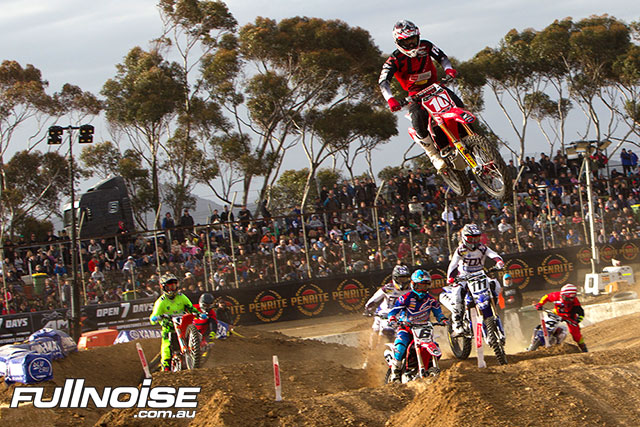 Honda Genuine Racing's Justin Brayton qualified first and took a win in his heat race at round 4 of the Australian Supercross Championship at Avalon last Saturday night.

The final didn't go to plan for the American as he was taken down in turn one and had to fight his way to the front runners from last place.

"Everything was going well; we qualified first and won our heat race again. In the final I was hit hard from behind and fell.

I got up in last place and had to start my race all over again," said Brayton.

The crowd was able to witness the heart and determination of the current point's leader as he worked his way past 16 riders to finish the final in fourth place.

"Once I got to fourth I knew I needed to settle and focus on the championship.

There was very little grip. It was so windy, that track dried very quickly and I needed to be smart and ride to the conditions.

I have a comfortable points lead but I can't afford to give away any more points." Brayton added. Brayton goes into the final two rounds with an 11-point lead, 3 overall wins and 1 fourth.

He is also undefeated with a perfect qualification score of 4 heat race wins.

Brayton's compatriot and team-mate Adam Enticknap also came down in the final and the fan favourite was only able to push through to 11th.

Enticknap now sits in 8th in the championship. "It was tough; the track was massive, they were long laps and it was hard with the lack of grip-moisture in the track.

I made some mistakes in the main as well as crashed. I am happy I got back up and fought through half of the field, but I am disappointed with where I finished. I am looking forward to Sydney," said Enticknap.