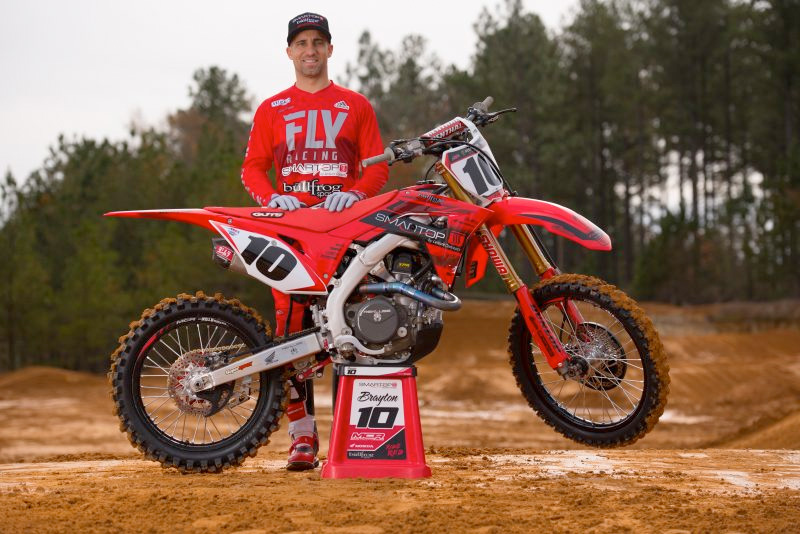 A veteran rider with a solid rÌ©sumÌ©, Brayton brings experience and consistency to the table for the 17-race Supercross series.
Team Honda HRC announced today their roster of racers for the 2020 race season, with a unique arrangement that will see two different riders competing in separate series alongside Ken Roczen, who earlier this year signed an extension to his agreement.

Joining the factory squad during the AMA Supercross series will be Justin Brayton, who has ridden for the Smartop/MotoConcepts/Bullfrog Spas Honda team for the past three years and had planned to continue in that partnership until this opportunity arose. For the AMA Pro Motocross series, Brayton will pass the baton to current GEICO Honda rider and reigning 250SX East Champion Chase Sexton, who will join the factory 450 effort fulltime at that point.

A veteran rider with a solid rÌ©sumÌ©, Brayton brings experience and consistency to the table for the 17-race Supercross series. This isn‰Ûªt his first stint with the team, as he raced with the factory Honda squad in 2012, when he scored his career-best series-overall placing of fourth, achieved with the help of five podium finishes and six additional top-five results.

Since Brayton‰Ûªs return to the Honda brand in 2017, he and the MotoConcepts team have opted to race Supercross only, and he has continued to log impressive rides including his first-ever victory, in 2018 aboard the MotoConcepts bike at Daytona‰ÛÓarguably the most challenging stop on the circuit.

The Iowa native is also a two-time Australian Supercross Champion and will in fact return Down Under this fall to defend that title with the Penrite Honda squad before turning his attention to preparing for 2020 aboard a Team Honda HRC CRF450R.

‰ÛÏI‰Ûªm beyond excited to be riding for factory Honda in the 2020 Supercross season,‰Û

The Illinois native will not defend his East crown in Supercross, but will instead ride a CRF250R in the West region
Meanwhile, Sexton will have the opportunity to once again campaign the 2020 250SX series with GEICO Honda before moving up to the CRF450R for AMA Pro Motocross.

The Illinois native will not defend his East crown in Supercross, but will instead ride a CRF250R in the West region before beginning his Team Honda HRC agreement, which currently runs through the 2023 season. There‰Ûªs also a possibility of him periodically competing in the 450SX class at East rounds, as a wildcard rider.