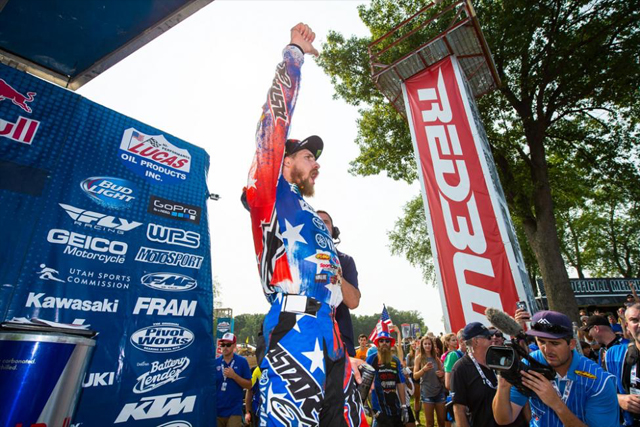 The 2015 Lucas Oil Pro Motocross Championship celebrated Independence Day on Saturday with the sport's annual tradition in Southwest Michigan, as the Red Bull RedBud National signified the seventh round of the season.

It was a memorable day for the Yamaha brand, as it claimed the overall win in both classes for the first time since Southwick in 1998. One week after he earned the first overall win of his 450 Class career, Autotrader.com/Toyota/Yamaha's Justin Barcia went back-to-back, exactly six years to the date of the inaugural series victory for Joe Gibbs Racing's motocross effort at RedBud in 2009.

Red Bull KTM's Ryan Dungey, championship leader in the 450 Class, made the first statement of the day by garnering the Bud Light Fastest Qualifier. When the opening moto got underway, he positioned himself inside the top two behind Barcia, who claimed the Motosport.com Holeshot Award. Barcia and Dungey set a torrid pace early, which allowed them to eventually open a double-digit margin over the field.

On Lap 7, Dungey was able to make a pass for the lead after patiently waiting for an opportunity to arise. Once out front, he never looked back and went on to earn his fifth moto win of the season by a margin of 3.232 over Barcia, who kept Dungey in sight the entirety of the moto. 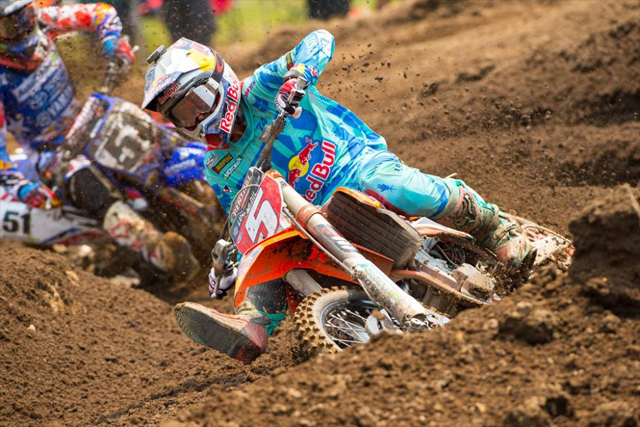 Dungey went head-to-head with Barcia and just missed out on the win. - Credit: Simon Cudby
When the gate dropped on Moto 2, Barcia put his Yamaha out front again to sweep Motosport.com Holeshot Awards for the afternoon, brining his season total to six. Dungey slotted into second and settled into a pace that allowed the lead duo to pull away from the field once again.

Barcia kept Dungey approximately two seconds behind him throughout the moto, but in the late stages the KTM rider picked up the pace and began to pressure the lead. He got within a bike length of Barcia over the course of the final two laps, but was unable to make a pass as they battled both increasingly challenging track conditions and lapped riders.

Barcia went on to a wire-to-wire win by 1.651 over Dungey. The pair tied for the overall victory with identical moto scores, but Barcia's triumph in the final moto awarded him the tiebreaker. Roczen again followed in third after starting fourth.

"In the first moto I got the holeshot, but Ryan [Dungey] closed in and made the pass. I closed back in but then some lappers got in the way and separated us a bit, but I was feeling confident and happy with the result," said Barcia. "I won last week in the mud and I knew people would think that I won because of [the conditions], so I really wanted to win in dry [conditions] and show I'm able to fight for the win every weekend.

"Ryan kept me honest in that last moto. He was on me the whole time. It was unbelievable. For me, it was just hammer down the whole time. This is a bigger win for me [than last week] because RedBud is such a challenging track."

"I think we had a great day. We got second in both starts, but if there was anything [to improve today] it'd be there and being able to take the lead on that opening lap," said Dungey. "Overall the day was good and I'm happy with that.

"The track got rough and it made trying to push forward that much more challenging. I try to win every race [despite a large points lead], but you still have to be smart and make the right choices. Sometimes you just have to realize it's not always worth pushing it too much [and causing a mistake]."

Dungey added to his lead in the 450 Class standings and moved to 44 points ahead of Roczen, while Barcia asserted his third standing. He moved to within 63 points of Dungey and 19 of Roczen. 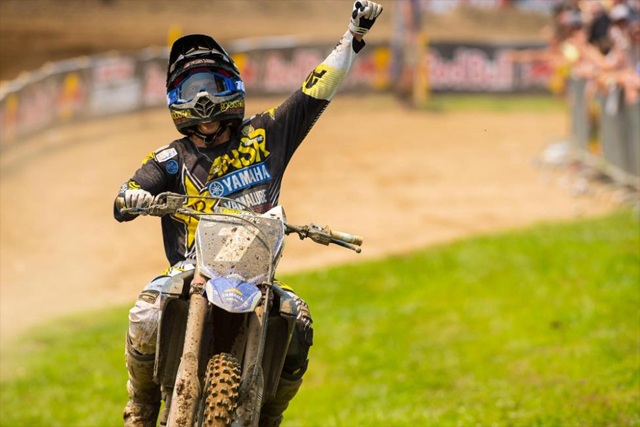 Martin won his fourth race of the 2015 season and reclaimed the points lead. - Credit: Simon Cudby
Following a wild afternoon of competition in the 250 Class that showcased five different lead changes, defending champion and Yamalube/Star Racing Yamaha rider Jeremy Martin emerged with his fourth overall win of the summer after late passes for the lead in each moto gave him a 1-1 sweep.

Martin established himself as the rider to be in the 250 Class after earning the Bud Light Fastest Qualifier in the morning timed practice sessions. When Moto 1 got underway, Martin positioned himself up front but missed out on the Motosport.com Holeshot Award to Monster Energy/Pro Circuit/Kawasaki's Joey Savatgy, who crashed out of the lead on the opening lap.

That allowed Martin to assume control of the moto, with his teammate Cooper Webb and Red Bull KTM's Marvin Musquin, the entering points leader and winner of the previous round, following in second and third.

Martin's lead lasted for five laps before Webb closed in and took over the top spot. One lap later Martin lost another position to Musquin and soon found himself fighting to stay on the podium. After briefly giving up third to Rockstar Energy Husqvarna Factory Racing's Zach Osborne, Martin retook the position and started his march back towards the front.

Musquin came back under fire from Martin on Lap 9 and relinquished the spot to set the stage for a showdown between the Star Racing rivals and teammates. Musquin encountered misfortune on Lap 11 when a brief fall dropped him to fourth behind Osborne and would not recover.

Out front Martin consistently closed his deficit to Webb and a battle began between the pair in the closing laps. After carrying too much speed into a corner Webb overshot a turn on the final lap, which allowed Martin to make an inside pass and steal the win by a margin of 2.991. Osborne rounded out the podium in third, with Musquin fourth. 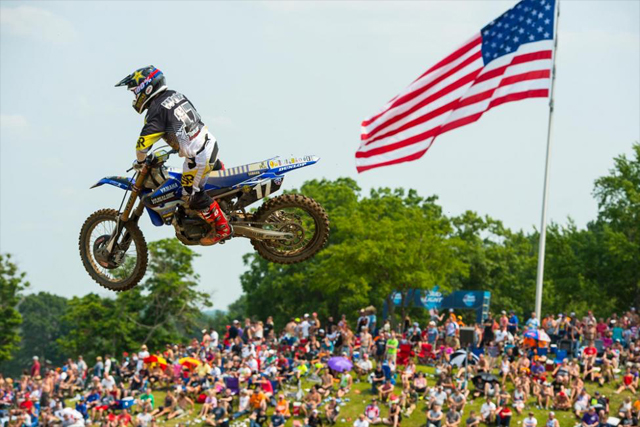 Webb had a win within reach in both motos, but ended up third overall - Credit: Simon Cudby
The second moto saw GEICO Honda's Christian Craig claim the Motosport.com Holeshot Award and as the field shuffled into place on the opening lap, Musquin, Webb and Martin once again positioned themselves in the lead group by slotting into second, third and fourth behind Craig.

A battle for second between Musquin and Webb allowed Craig to open a gap during the first couple laps before Webb was able to make the pass stick and take over second on Lap 2. Musquin continued to lose ground in the ensuing laps and soon gave up third to his championship rival Martin on Lap 6. He would eventually drop out of the top five.

A couple laps later the focus of the race returned to the front as Webb closed in on Craig and made an aggressive pass for the lead on Lap 8. He was able to pull away quickly and appeared to be in full control of the moto. However, with the overall win in his sights Webb made a costly mistake on Lap 13 and fell. At that same moment Martin was making a pass on Craig for second, but it turned into the lead as both riders rode by Webb as he picked up his bike.

Martin was able to pull away from Craig easily, while Webb reentered the action in fourth behind Osborne. The reigning champion went on to secure the overall win by 4.947 over Osborne, who passed Craig for second with two laps remaining. Craig held on to finish third for the first podium result of his career. CycleTrader.com/Rock River Yamaha's Alex Martin was fourth, with Webb fifth and Musquin sixth.

Martin's fourth overall win of the season (1-1) is the most in all of Lucas Oil Pro Motocross. Osborne finished in the runner-up spot (3-2) to tie a career-best result, while Webb managed to stay on the podium despite his adversity in third (2-5). Musquin finished sixth overall (4-6), his second worst result of the season.

"I got off to two really good starts. I was leading the first moto and then my arms got tired. I really struggled for a while but I found a way to turn it around and get back up there. Marvin and I battled a lot today (for the first time this season). We've been dodging each other all season, but today was the day we battled.

"He's a phenomenal racer and he keeps me on my toes. I saw a yellow flag and thought it was cooper and it ended up being him, so I just tried to pick a line and make a move and it worked. I got lucky there."

Musquin entered RedBud with a 10-point lead over Martin in the 250 Class championship standings, but a 17-point swing in Martin's favor now puts the defending titleholder back top the points for the third time this season. He carries a seven-point lead over Musquin into the next round of the season, while Osborne currently sits third, 91 points out of the lead.

"Today could have been worse. When I crashed [at Thunder Valley] I bruised the bone in my wrist and stretched the ligaments, so it's been tough and I've been dealing with this [since Round 3]," said Musquin. "I've actually been doing really good at the races but this week I tweaked it again. I heard a pop in my wrist and it hurt again.

"I knew [today] would be tough, but not that tough. This was one of my worst races. It felt good at the beginning of the motos, and my speed was good, but it just got worse and worse later in the race."

The Lucas Oil Pro Motocross Championship will take its second break in action of the 2015 season next weekend before returning to competition on July 18 with the La Crescent Wine and Spirits Spring Creek National from Spring Creek MX Park in Millville, Minnesota. It will serve as the eighth stop of the 12-round championship.

Top Image: Barcia has won two in a row.