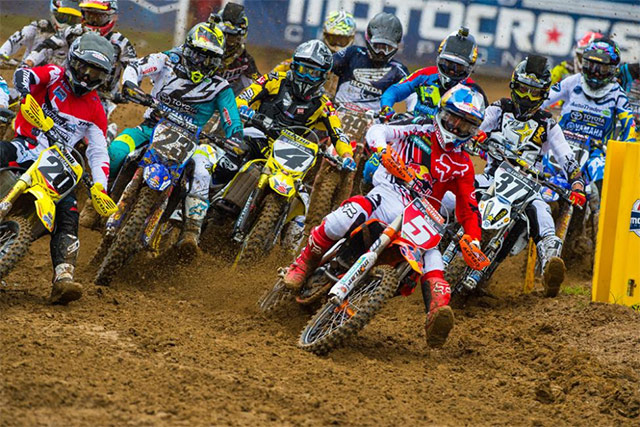 The 2015 Lucas Oil Pro Motocross Championship reached its halfway point on Saturday with the GEICO Motorcycle Budds Creek National, Round 6, in the shadow of the nation's capital of Washington D.C.

Mother Nature proved to be the biggest obstacle throughout the afternoon as rain resulted in the most challenging conditions of the season and impacted the final results. 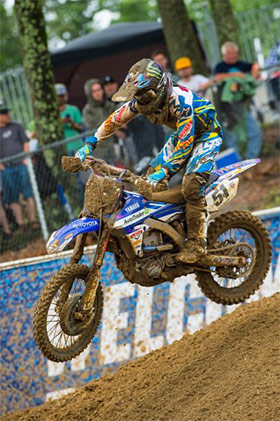 Barcia thrived in the wet conditions to take the first win of his 450 Class career. Photo: Simon Cudby
In the 450 Class, Autotrader.com/Toyota/Yamaha's Justin Barcia emerged from a dramatic day of competition with his inaugural win in the premier class as championship leader Ryan Dungey experienced misfortune aboard his Red Bull KTM. In the 250 Class, points leader Marvin Musquin survived an adversity filled afternoon to claim his third victory of the season.

The championship leader wasted little time in opening a gap and sprinted early to establish a comfortable lead that he would ultimately never give up. Behind him, Roczen was aggressive in the early stages of the moto in hopes of keeping pace with his rival and made a pass on Pourcel to move into second on the opening lap as he pursued back-to-back overall wins. The fight for third became a three-rider battle between Pourcel, Barcia and Team Yoshimura Suzuki's Blake Baggett.

As Dungey opened a lead of over 20 seconds, Roczen started to lose his earlier pace and fell back into the clutches on Pourcel, Barcia and Baggett. Pourcel re-passed Roczen for second on Lap 12, igniting a snowball effect for Roczen as he soon lost a podium finish to Barcia and fourth place to Baggett in the span of about one lap. Dungey went on to the moto win by 10.240 with a wire-to-wire effort over Pourcel, while Barcia followed in third. Roczen finished fifth.

A strong storm cell hit the track and surrounding area prior to the start of Moto 2 with lighting halting the start of the final race of the afternoon. Two hours after the scheduled start of the second moto the field roared out of the gate in the most challenging conditions of the day, with Barcia taking his series leading fourth Motosport.com Holeshot Award just ahead of Dungey. However, the battle for victory was altered when the front end of Dungey's KTM dipped off the track's first jump, forcing the points leader to jump off and crash into the ground. He got up, appearing unscathed, but had to wait for the entire field to pass before getting back on the bike. 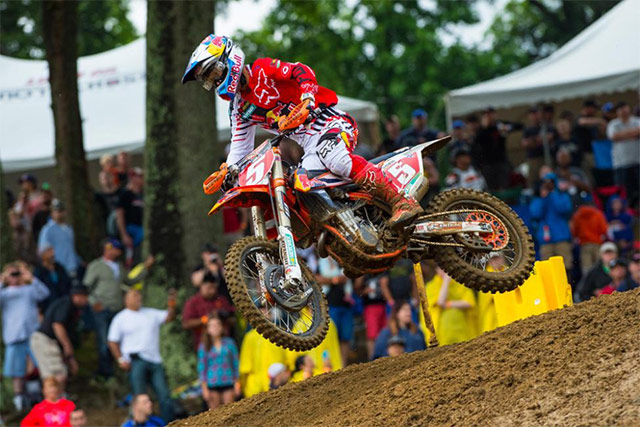 Dungey dominated the first moto, but suffered a scary crash to start Moto 2 that relegated him to a finish off the overall podium for the first time this season. Photo: Simon Cudby
Dungey's misfortune ended up working into Barcia's favor as the Yamaha rider pulled away in the treacherous, muddy conditions and never looked back. Pourcel slotted into second after Dungey's crash, with Baggett moving into third ahead of Roczen. Dungey reentered the race at the back of the field, but fought his way into 21st by the end of the opening lap. He continued to work forward from there.

Barcia was never challenged out front and was one of the few riders on the track to not face any adversity in the moto. He went wire-to-wire en route to the checkered flag by a margin of 17.941. The battle for second was a race-long fight between Pourcel and Baggett. The two traded the position after each found himself on the ground at some point in the moto, but in the end Baggett's late charge to take over the spot with two laps remaining was enough to land him a career-best second, with Pourcel third. Roczen steadily finished fourth while Dungey had to overcome another small crash late in the moto to secure a hard-fought, point-salvaging 12th-place result.

Barcia's 3-1 finishes put him on top of the 450 Class podium for the first time in his 24th career start, becoming the 64th different premier class winner in history. It was also just the second Lucas Oil Pro Motocross Championship victory for the Joe Gibbs Racing Motocross effort, with the team's first coming at Michigan's RedBud during the 2009 season.

"I had so much fun out there. I kept it positive all day. We went through three engines today and I'm so proud of how hard the entire teamed worked to make this happen," said Barcia. "I got the start I needed and I just rode the best I could without making any major mistakes. This has been a long time coming and I'm just so happy to get my first win and put this JGR team on top of the box."

Pourcel earned a career-best finish in second (2-3), while Baggett equaled his career-best result in third (4-2). Roczen (5-4) and Dungey (1-12) finished in a tie for fourth, with Roczen earning the position by virtue of his better second moto finish.

"I'm glad I'm ok [after the crash on the first lap]. I just hit a soft spot and it ejected me when I landed. I'm ok and that's the main thing, to be safe and healthy," said Dungey, who finished outside the top 10 and off the overall podium for the first time this season. "I tried to regroup and come back, and do the best I could, but I tucked the front end right before the end and it cost me another spot. But we'll come back stronger next weekend."

Despite the adversity, Dungey's recovery in the second moto meant he didn't lose a single point to Roczen in the battle for the championship. The two riders remain separated by 37 points in the 450 Class standings. Barcia's triumphant effort moved him to third in points, 63 markers out of the lead. 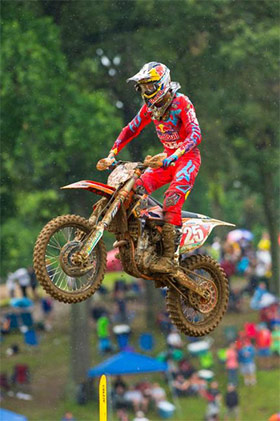 Musquin endured a tough first moto to emerge triumphant in Moto 2 and secure the overall win. Photo: Simon Cudby
The rainy conditions presented an added challenge for the 250 Class, who took to the track first, and at the end of the only timed qualifying session in the morning it was Monster Energy/Pro Circuit/Kawasaki's Adam Cianciarulo who earned his second Bud Light Fastest Qualifier of the season.

Conditions improved heading into Moto 1 and when the gate dropped, Traders Racing Kawasaki's Justin Starling emerged from the fray with his first ever Motosport.com Holeshot Award ahead of GEICO Honda's RJ Hampshire and CycleTrader.com/Rock River Yamaha's Alex Martin. Musquin avoided multiple crashes off the start to slot into eighth, but needed to make some moves in order to catch up to his main title contender Jeremy Martin as the Yamalube/Star Racing Yamaha rider started fifth.

Hampshire seized the opportunity to make a pass on Starling and moved into the lead on the opening lap. Not long after, Alex Martin followed into second and was able to take advantage of a big mistake from Hampshire on Lap 1 when the rookie crashed out of the lead and lost several spots as he attempted to restart his Honda. Martin proceeded to open a multiple second lead from there, while Starling and Rockstar Energy Husqvarna Factory Racing's Zach Osborne moved into second and third.

With his brother out front, Jeremy Martin started his march toward the podium. As he was doing so, Musquin and Cianciarulo came together during a battle to break into the top five, sending both riders down into the mud. The pair returned to action simultaneously, but dropped just outside the top 10. With his championship rival facing adversity, Martin capitalized on the opportunity and broke into the top three on Lap 5. As time wound down in the moto, he made another pass on Osborne for second and set his sights on the lead.

Jeremy methodically erased his deficit to Alex and the brothers engaged in battle for the win for the first time ever, with Jeremy getting the upper hand with two laps remaining after Alex was forced to remove his goggles in the wet conditions. However, the drama continued on the final lap when Jeremy briefly stalled entering a corner, allowing Alex to reclaim the lead and take the first moto win of his career by 2.751 after leading 13 of the 16 laps in the moto. Jeremy recovered to finish second, with Osborne third. 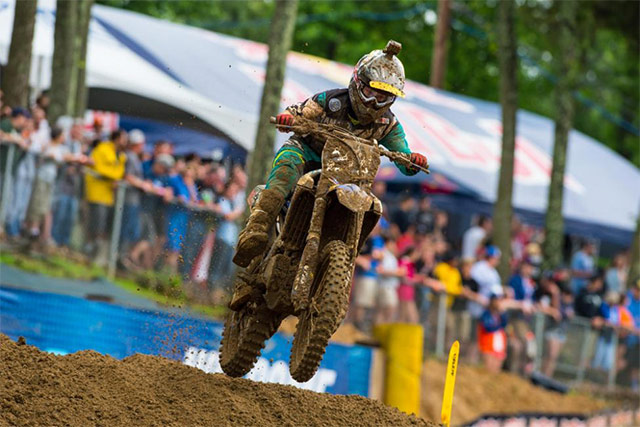 Alex Martin enjoyed the best outing of his career, missing out on his first ever overall win via tiebreaker. Photo: Simon Cudby
The rain returned for the final moto and as the field converged into the first corner it was Cianciarulo who came out with the advantage and his first Motosport.com Holeshot Award ahead of Musquin. With a clear track ahead of him, Cianciarulo was able to stabilize a multiple second lead over Musquin as the lead duo slowly pulled away from the field. Jeremy Martin got a solid start in fourth, while Alex Martin had his work cut out for him in order to capture his first career overall after starting 10th.

Musquin's quicker lap times allowed him to apply pressure on Cianciarulo for the lead, resulting a small tip over from the Kawasaki rider on Lap 4 that allowed to Frenchman to take control of the moto. Cianciarulo recovered quickly, but lost valuable ground and was soon challenged by Martin for the position. However, the early leader regained some consistency and was able to assert himself into the runner-up spot.

Misfortune struck Jeremy on Lap 11 when he crashed out of third and dropped to sixth, just ahead of his brother in seventh. Jeremy was able to fend off the late pressure from Alex, which ultimately proved to be the deciding factor in the overall classification. Musquin took the win by 11.135 over Cianciarulo, while Monster Energy/Pro Circuit/Kawasaki's Joey Savatgy landed on the podium in third.

When the overall results were tallied, both Musquin (7-1) and Alex Martin (1-7) sat tied atop the standings with identical moto scores. However, by virtue of his second moto win Musquin earned the overall, preventing Martin from capturing the first triumph of his career.

"I didn't get a good start in the first moto, but I tried to be patient and follow the guys ahead of me. Then I got together with Adam [Cianciarulo] and ended up seventh, so I was not happy," said Musquin. "I got a better start in Moto 2 behind Adam. He crashed again and I got the lead. From there I wanted to make sure I just focused on my lines and stayed out of trouble. It's not the way I want to win an overall, but I'll take it."

"Two big milestones in one day for me. I'm ecstatic," said Martin. "Today was tough. It was one of those races that could probably decide the championship [because of the conditions]. I'm just stoked to get the first moto win and first overall podium of my career."

Musquin maintained control of the championship lead and now holds a 10-point advantage over Jeremy Martin, who finished fourth overall (2-6). Cianciarulo, who finished sixth overall (8-2), now sits third, 80 points out of the lead.

The 2015 Lucas Oil Pro Motocross Championship kicks off the second half of the 2015 season next Saturday, July 4, with the Red Bull RedBud National from RedBud MX in Buchanan, Michigan.

Main Photo: Blake Baggett (4) and Christophe Pourcel (377) put themselves up front all afternoon and landed on the overall podium as a result.
Credit: Simon Cudby