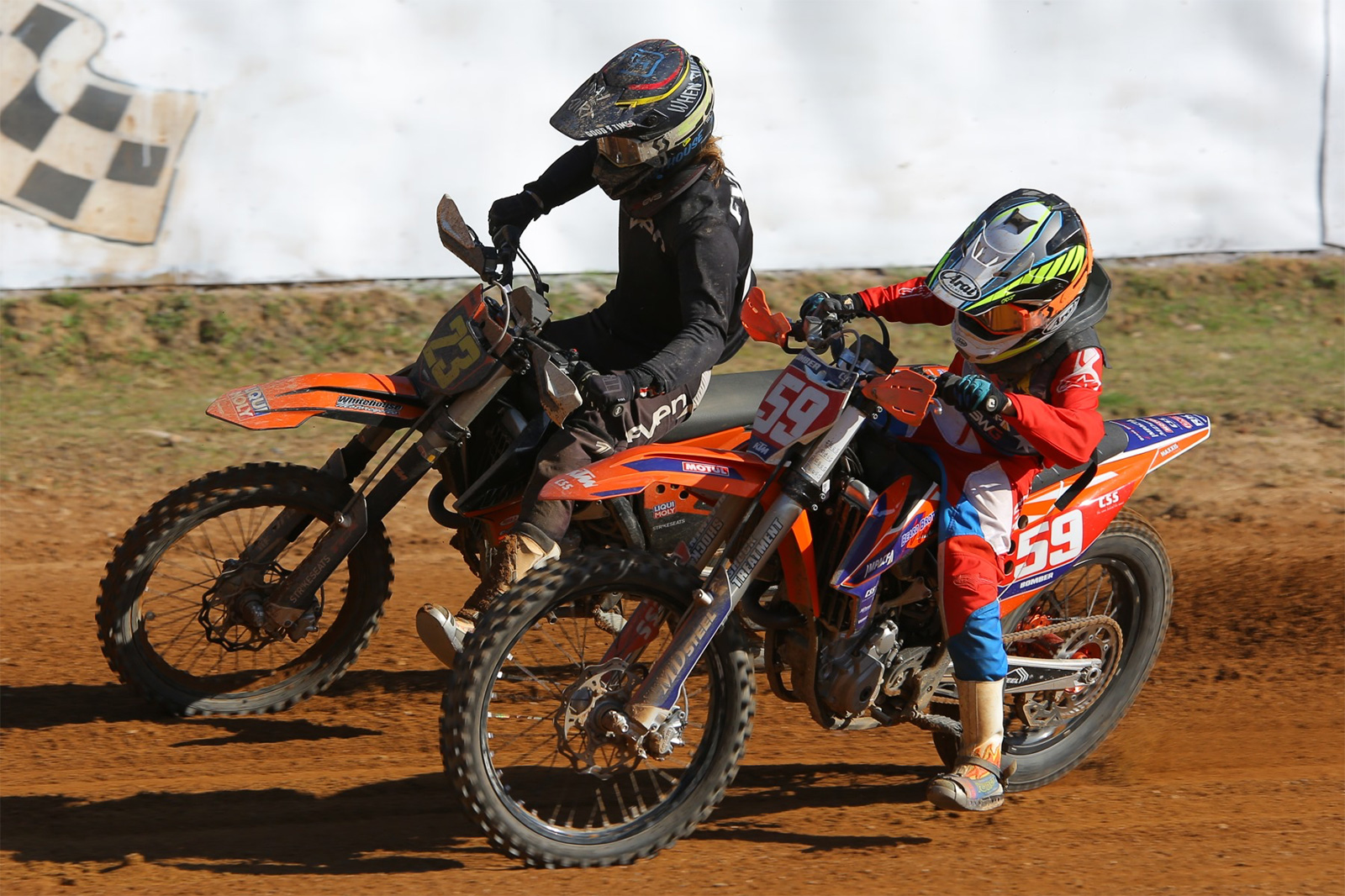 Tom Drane (59) dicing with Remmie Fyffe (23). Photo: David Lamont
Only two riders were able to win more than one championship class over two days of exciting racing as the 2019 Honda Australian Junior Dirt Track Championships were conducted by the Central Coast Junior Motorcycle Club at their Allen Park track at Somersby on the weekend.

Thirteen classes produced 11 different winners, and a string of other placegetters who all helped confirm that the future of the sport is in good hands.

Albury Wodonga rider Archie McDonald won both of the classes for the 11 to Under 13 years classes which is currently the most ‰Û÷red-hot‰Ûª of all the age brackets.

The always highly competitive 13 to Under 16 years classes produced the other dual winner in Forbes rider Tom Drane who was denied a third win in the last of the weekend‰Ûªs final.

After finishing runner-up in three other classes Gold Coast rider Seth Qualischefski finally got the better of Drane to add a win to his medal haul.

Qualischefski was a tireless performer on the weekend being one of a few riders to contest four classes, which in total meant he rode 84 laps of racing.

There were also three other Gold Coast riders who claimed a championship class win.

Sympathy though to Anika Loftus from Brisbane won the first three rounds before she was injured.

The other Gold Coast successes went to Rory McQualter who added two third placings to his win, and Viv Muddle who placed third as he strived to make it a double.

Tom Drane will have to start making room for his brother Sam to build his trophy collection as Sam won his first ever Australian Championship.

The host club boasted one championship class winner in Lachlan Russell, a feat matched by the Kurri Kurri Junior Club thanks to a win by Thomas Bullen.

With such a classy line-up of talent assembled even qualifying for the finals in some classes was no easy feat, as some of the minor placegetters still left pleased with their efforts, including a number who gained their best ever results.

Special mention must be made of Kurri Kurri rider Cameron Dunker and Albury Wodonga rider Remmie Fyffe who were both dual place getters.

Riders travelled from as far afield as Townsville in the north, Cobar and Mildura in the west and Melbourne in the south with the much-travelled families praising the host club for its staging of the meeting.