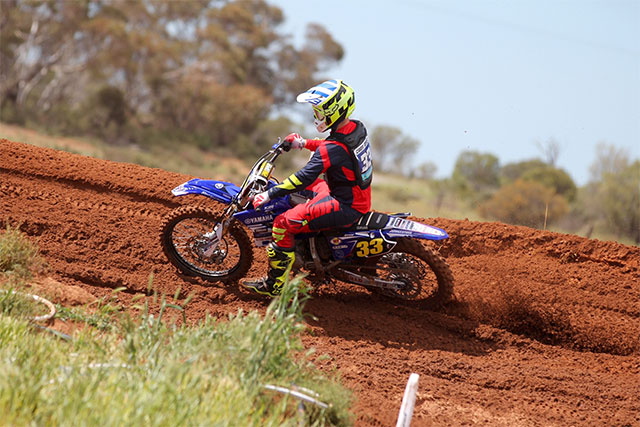 The 2016 KTM Australian Junior Motocross Championship continued with hundreds of kids heading out to race again this morning - day four getting started with a bang at the Riverland Junior Motorcycle Club at Renmark.

With heats and more finals races on track, riders continued to navigate the tricky circuit, with a handful of competitors finishing this morning‰Ûªs events with reason to celebrate after taking further race wins.

The premier 250cc class were the first bikes to head out on the freshly prepared Riverland circuit for their third heat this morning, and for the first time this week it was Yamaha mounted Cody Dyce who snatched up the race lead ahead of Riley Dukes and Honda‰Ûªs Trent Collins.

From there, the top three riders checked out on fourth placed Brodie Ellis, and the battle for the number one spot unfolded. After only a few turns, Dukes made the pass on Dyce for the lead, but on the same lap Dyce reclaimed his position, leaving Collins and Dukes to go bar to bar for second position.

As the ten-minute race progressed, Dyce stretched out his lead on Dukes, while Collins dropped off the pace slightly back in third position. But it was all about Dyce this morning, who cruised to his first race win of the AJMX ahead of Dukes and Collins who wrapped up this morning‰Ûªs third heat in second and third positions.

Heat four was unfortunately red flagged due to a rider crashing immediately off the start. When the race was restarted BCP Honda‰Ûªs Taj Marshall secured the hole shot, but after only two turns a bunch of riders went down, including the race leader.

With Marshall out of the picture, Husqvarna‰Ûªs Callum Norton inherited the race lead ahead of Liam Walsh and Jy Roberts, but with Norton stretching out the gap on second place to more than 13 seconds, no one could get near the Husqvarna rider.

The attention then shifted to the positions behind Norton, and with the likes of Caleb Grothues and Michael Driscoll back in fourth and sixth places, heat four was a dash to the finish line.

But the man of the moment was Norton who took the race victory by 26 seconds, while Walsh crossed the line in third, followed by Grothues who put in a last lap charge to finish in third.

The younger 250cc class headed out for their third final immediately after the older category, and much like the race before them, when bikes hit the track it was just as exciting. KTM took positions one two and three after the first lap, with Mason Semmens, Rhys Budd and Levi Lane all within just a few seconds of each other.

From there, Semmens stretched out his lead throughout the ten-minute moto to a huge 14 seconds, while Budd also separated himself from third placed Korey McMahon.

And it was in those positions that the 128-150cc/200-250cc 13-U15 Years class finished in, with Semmens collecting yet another race victory from Budd in second, while McMahon wrapped up the third final in third. Regan Duffy and John Bova finished in fourth and fifth places respectively.

The fifth and sixth heats for the littlies of the KTM AJMX took place at the Riverland Junior Motorcycle Club this morning and once again young Kayd Kingsford showcased his skill on his KTM machine, taking the holeshot and moving straight in to the race lead.

With the track forming up to be rough and bumpy today, the 50cc competitors did well to steer their bikes around the circuit, and Kingsford, as well as second and third placed riders Koby Hantis and Oliver Paterno showed plenty of skill throughout the seven-minute race, all finishing in those respective positions when the chequered flag flew.

In the sixth heat, young Jake Cannon shot off in to the lead ahead of Jett Williams with the pair putting significant distance between themselves and Ky Woods. But Kayden Minear was determined to get to the front, and with only a few laps left, moved in to the top spot.

And when the chequered flag flew, it was Minear who secured the race win from Cannon who crossed the line in second while Ky Woods wrapped up heat six in third.

When the girls returned to the track for their third 85cc/150cc 12 ‰ÛÒ U16 Years final, spectators eagerly watched on to see the battle between Tanesha Harnett and Tahlia O‰ÛªHare unfold.

But it was O‰ÛªHare who shot out of her gate and in to the race lead ahead of Ebony Harris and Harnett. Soon after lap two, Madison Healey joined the party at the front in fourth position, with the top four riders all within a bikes length of each other.

As the third final progressed there was no change to positions, with O‰ÛªHare crossing the line victorious ahead of Harris and Harnett, while Healey and Hayley Miller wrapped up their third final in fourth and fifth places respectively.

The 444 KTM machine of Noah Smerdon was once again impressive in the fifth heat race for the 65cc 9-U11 Years class this morning. The young rider who was donning all black gear, led from the minute the gate dropped to the chequered flag.

Jake Snow finished in second position ahead of Rylan Gray, while Kobe Drew and Braden Plath wrapped up heat five in fourth and fifth places respectively.

In the sixth heat for the 65cc 9-U11 Years class, Ryder Kingsford followed the trend of the race prior, riding smart and consistent from the minute the gate dropped to the chequered flag.

William Kennedy wrapped up the seven-minute heat race in second position ahead of closest competitor Connor Towill in third. Tyler Collins, and Brenton Wilson both crossed the line in positions four and five.

The third final for the 85cc/150cc 14 ‰ÛÒ U16 Years category was drama filled to say the least. Bailey Malkeiwicz, had a brief battle with Tyler Darby in the opening stages of the moto and with an eight second lead, looked as if he would breeze to victory.

But on the final two laps, Malkeiwicz lost power to his Husqvarna machine, handing the lead over to John Bova, while Darby slotted back in to second position.

With obvious bike issues, Malkeiwicz nursed his machine throughout the final lap, however continued to lose positions.

And when the chequered flag flew, it was Bova who took the third final win, while Darby crossed the finish line in second position. Unfortunately for Malkeiwicz the final lap saw him drop further places, limping across the line in eighth, while Joshua Zorbas snatched up third.

In the third final for the 65cc 11 years‰Ûª class, Zachary Watson was once again impressive, edging out some of the toughest competitors in this year‰Ûªs championships to take a confidence boosting final race win.

Deegan Mancinelli also remained consistent in his 65cc final, holding on to position two from the minute the gate dropped, to the chequered flag. Third place was taken by Angus Riordan, while Myles Gilmore and Jackson Camilleri crossed the line in fourth and fifth places.

To stay up to date with all of the results and write ups from the 2016 KTM AJMX, head to www.ma.org.au, or like ‰Û÷2016 Australian Junior Moto X Nationals‰Ûª or ‰Û÷Motorcycling Australia on Facebook.