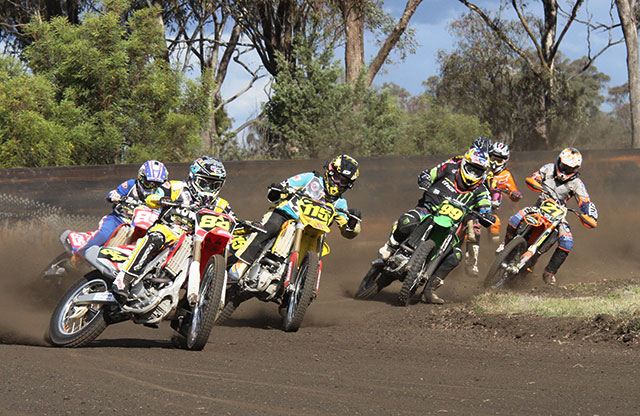 The 670 metre long track will test out riders from seven up to 16 years of age, with some even younger riders contesting support classes.

Machines will range from 50cc and 65 cc for the youngest riders, up to powerful 250cc 4-stroke machines for the older brigade, many of whom will soon being heading in to the senior ranks.

While there will be the usual strong representation from the host club, the Hunter Motor Cycle Club, as well as the Kurri Kurri and Central Coast Junior Clubs, the furthest travelled riders will come from Townsville.

National Championship success is, rightly, never easy to achieve and such is the depth and quality in the entries for some of the 14 championship classes that the battle even to earn a berth in the final is sure to be intense.

For the two girls classes, and one other open class, points accumulating over five rounds of racing will decide the champions.

For all other classes there will be three rounds of racing to determine the top ten who qualify directly to the final, while the next 12 in line on points have to contest a repechage, a sudden-death race-off, from which only the first two riders progress to the final.

It is hard going to win one title, but to win at both dirt track and long track is a special feat that few manage to achieve.

The Cowra club produced five different winners at the West Wyalong showdown but there are many local riders who are expected to be prominent in competition this weekend.

Stauffer, son of Jamie, will do battle with Oliver Bayliss, son of Troy, in one of the championship classes.

Organisers have set aside Friday (Sept. 20) for machine scrutineering and practice for all classes.

This will allow the meeting to kick off in earnest on Saturday (Sept. 21) with a Grand Parade and Official Opening to take place at 9.30 am before the first of more than 110 races will fire up at 10 am.

It is envisaged that the three rounds of heats for all classes will be completed on Saturday.

That will leave racing on Sunday (Sept.22), again with a 10 am start, for the vital repechage races and then the finals, as well as the last two rounds of the those classes which will be decided on points over the five rounds in total.

In case you are wondering how significant this title meeting is for the future of the sport, these riders are not just tomorrow‰Ûªs stars, many of them are already highly skilled riders and they inevitably turn on exciting racing to match anything seniors can produce.

In 2003 this corresponding title meeting was staged at Cowra and two local riders Ben Cook and Jack Dawes competed in the supporting class for riders aged between 4 and 7 riding 50cc machines.

This weekend those two are among a group of riders having their last shot at an Australian Championship at the junior level before they embark on a senior career.

Main Photo: The older brigade in the junior ranks - many will sign off and head to seniors soon
Credit: Mick Thomas at Aust Junior Dirt Track Championship meeting