Julien Lieber set for MXGP with Monster Energy Kawasaki in 2018 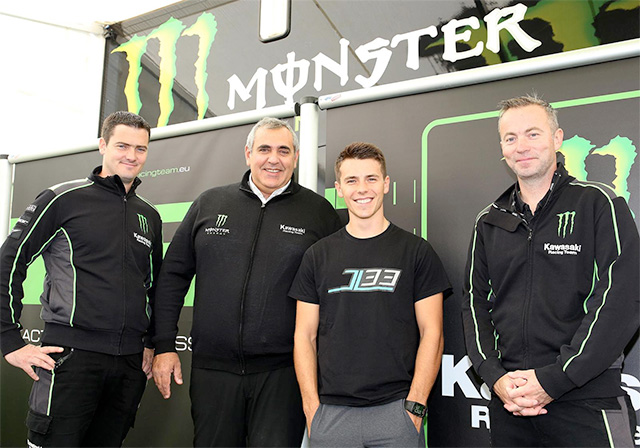 Julien Lieber will join fellow Belgian Clement Desalle in the Monster Energy Kawasaki Racing Team when he moves to the MXGP premier class of the FIM Motocross World Championship next season.

Lieber had a great weekend in his home GP at Lommel last weekend; he claimed his fifth MX2 podium of the season, was selected as a member of the Belgian team for the upcoming Motocross of Nations and signed a contract to race the factory Kawasaki KX450-SR next season!

It was the main highlight so far of a wonderful season during which he has made a sensational comeback as a privateer in the MX2 series after one complete year out of action. Already considered one of the most promising Belgian hopefuls after ranking sixth in the 2015 World Championship and standing on the podium with Team Belgium at the MX of Nations, Julien spent last year in numerous hospitals and recuperation centres after surgery to both hips.

Back on a bike this season he surprised many people when he took the red plate as MX2 series leader in Indonesia, and later confirmed that he was back to his best form with five podiums so far. Racing this year in his own private team, Julien who turned 23 years old in June, already has some experience of the 450 as he entered the French beach series in this class five years ago; he will line up next season alongside Clement Desalle, and will start working with the team immediately after the Motocross of Nations in October.

"Coming back to racing this season, one of my goals was to get a top ride for the MXGP class, and I‰Ûªm so happy to have achieved that," Lieber explained.

"Joining the main class with such a professional team is like a dream, and for sure I will do my best to get strong results. There‰Ûªs a lot of top riders in the MXGP but I already trained and raced on a 450 a couple of years ago and I think that this class will suit my riding style; I‰Ûªve ridden a 250 for seven years now, so it really is the right moment to move up and you can‰Ûªt do it in a more professional team than the Monster Energy Kawasaki Racing Team. I‰Ûªm also happy to be teammate with ClÌ©ment; we already have a good relationship and I‰Ûªm sure we‰Ûªll work closely together.‰Û