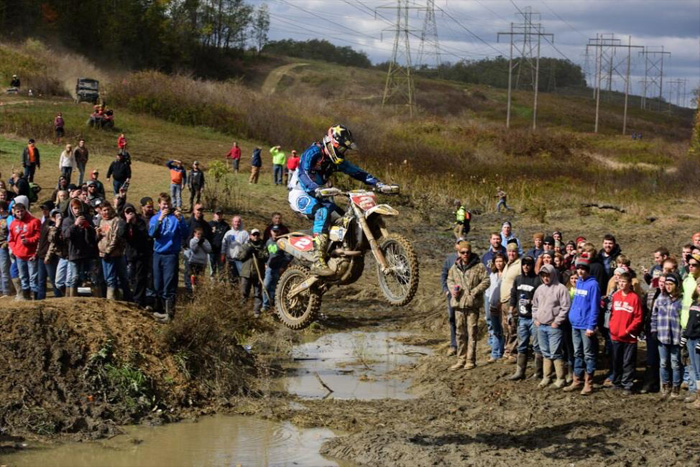 The penultimate round of the 2015 AMSOIL Grand National Cross Country Series (GNCC), presented by Maxxis, an AMA National Championship, was full of excitement and chaos today as 12 of the world's best off-road racers lined up in the star-studded XC1 Pro class.

Equipped with a former GNCC National Champion, a few international stars and new additions to the front row, the ITP Powerline Park GNCC was the ultimate showdown in off-road racing.

As the green flag dropped for the XC1 Pros, it would be N-Fab AmPro Yamaha's Jordan Ashburn who jumped out ahead of the rest of the field grabbing the $250 All Balls Racing XC1 Holeshot Award, but unfortunately suffered a small bobble right after that, allowing AirGroup/Rockstar Energy/Husqvarna's Ryan Sipes to lead the pack into the woods.

Sipes lead the first lap with a dominate pace, setting himself up for what looked to be like an overall win until taking a bad line up a hill climb and opening up the lead position for Rockstar Energy Husqvarna Factory Racing's Josh Strang.

While riding in second, Sipes would unfortunately deal a bad wheel bearing forcing him take an extra pit stop, ultimately robbing him of a podium finish. In the end it would Strang, the 2010 GNCC Champion, who was victorious for the second time this season.

"It's always good to race someone until the finish, but it's also good just to have a gap at the end of the race like today," said Strang. "After Sipes missed the hill climb I was able to pass him, and I was able to get a gap between us and maintain it."

After finishing second at the previous round, N-Fab AmPro Yamaha's Grant Baylor had the confidence to pull another second overall today making for his fifth podium finish of the season. During the first half of the race the South Carolina native swapped positions back and forth with JCR Honda's Chris Bach and Factory Beta Racing's Cory Buttrick, but would ultimately prevail and move himself back into second in the points championship.

In the latter half of the race the battle for third heated up between Ashburn, Buttrick and Bach. Ashburn ended up claiming the last position on the podium followed by Bach who ran a consistent race crossing the finish line in fourth. Sipes was able to rebound and sneak his way into the fifth place position on the final lap, just ahead of Buttrick who rode arguably the best race of his season finishing sixth in the XC1 Pro division.

"I really wanted a good start this weekend, and I actually got the holeshot," reported Ashburn. "But then I crashed four corners in, but it's all good. I just had to fight really hard today and charge to get back up to third."

With XC2 Pro Lites title in hand, Jason Thomas added yet another class win to his record. The win wouldn't come easy for his as Rocky Mountain ATV/MC KR4/FAR's Nick Davis put up a hard fight for the first half of the race until a cracked piston would ultimately put him out of the race. Raines Riding University/Atlas Yamaha/OffRoadViking.com's Ricky Russell found himself in second, followed by his teammate Austin Lee in third.

"Having the championship already locked in took the pressure off of this race," said Thomas. "I ended up letting Russell by, and then we both crashed together, but it was a fun race against him and Davis."

Pennsylvania's Ryan Lojak capture the $100 Hot Cams XC2 Holeshot Award, finishing 12th for the day against some of the best off-road motorcycle racers. While Kentucky's Vance Francis went home with the $125 American Kargo Top Amateur Award, after leading every laps in the 250 A division and finishing 17th overall.

The 2015 AMSOIL GNCC series heads to Crawfordsville, Indiana on October 31 and November 1 for the AMSOIL Ironman GNCC.