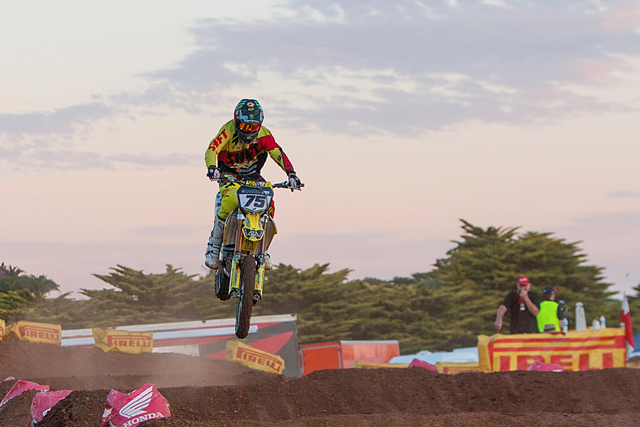 Hart&Huntington, InsureMyRide, Suzuki's Josh Hill has become the third rider in three rounds to stand atop of the 2013 Terex Australian Supercross Championships standings after winning round five held at Phillip Island, Victoria this afternoon.

The ASX riders returned for their second day of racing action, running along side the 2013 Australian MotoGp round, with Carlton Dry Honda's Weston Peick leading the points standings coming in to the round, after picking up the win at round four Yesterday after early series leader Matt Moss struggled to a 11th place finish after a huge crash at the start of the race.

Unfortunately for Peick, he became the second rider to suffer a big over the course of the weekend who suffered a crash that eventually lead to the loss of the championship leaders red plate. Peick crashed heading into the whoops during practice, breaking his collarbone and putting and end to his championship hopes, with just one round remaining.

When the gates dropped on the main event it was Hill who lead the field over the finish line at the conclusion of lap one and never looked back, opening up a gap of over 14 seconds last in the race before cruising around on the last lap to take a convincing Victory.

Finishing in second place was Motul Pirelli Suzuki racer Matt Moss, while DPH Motorsports Sam Martin put in the best race of his young career with the 18 year old piloting his RM-Z 450 to the final step of the podium, giving Suzuki a clean sweep over the nights proceedings. 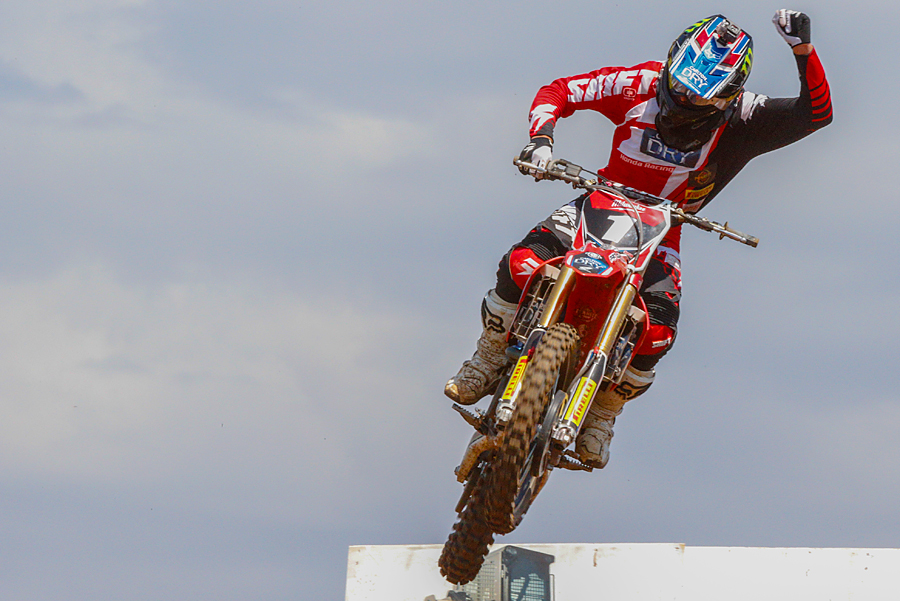 Gavin Faith is on track for back to back ASX SX Lites titles after two round wins at Phillip Island - Credit: Aaryn Minerds
The story line in the SX Lites class followed a very similar path as the SX Open class with Carlton Dry Honda's Gavin Faith shooting out to the lead on the first lap of the main event and was never headed has he claimed a 14 second win.

Behind Faith the race became a bit of a precession with not one pass being made inside the top seven throughout the first 14 laps of the 15 lap race. That changed on the final lap due to a small crash by Dylan Long costing the KTM privateer second place for the round as Raceline Pirelli Suzuki's Ryan Marmont slipped by to take the second step of the podium.

Long was able to quickly recover to snare his second podium finish of the season.

Serco Yamaha's Luke Styke came into today's round with a two point championship lead and still recovering from a partially dislocated shoulder he suffered yesterday. Putting the pain behind him, Styke raced to a brave fourth place finish.

Styke's fourth place finish combined by with Faith's win, was enough for the reigning champion to move into the SX Lites championship lead by five points as the series heads to Toowoomba in Queensland for the final round on the 16th of November. 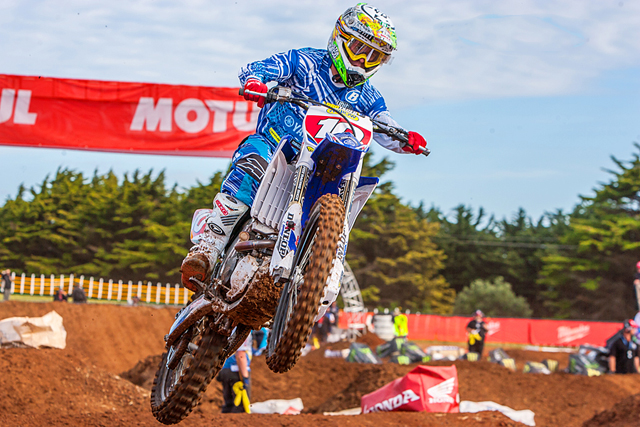 Jay Wilson just needs three points at Toowoomba to secure the Under 19s title - Credit: Aaryn Minerds
Jay Wilson continued his dominating form in the Under 19's class winning all three rounds held for the class at Phillip Island and remains undefeated through the four rounds contested.

Wilson will head to the final round with a commanding 22 point lead, while it will be a three way battle for second place with Jake Emanuelli, Joel Wightman and Corey James all tied on 78 points each.

Click Here for all round five results and championship standings