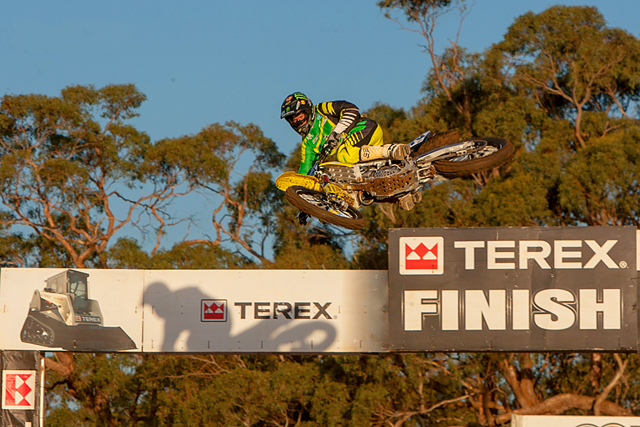 Josh Hill has shown his true form at the third round of the Terex Australian Supercross Championship with a popular win at the Borderline Speedway in Mount Gambier, South Australia on Saturday the 12th of October.

The Hart and Huntington / InsureMyRide, Suzuki pilot who did not have the weekend he was looking for at the opening two rounds held in Darwin four weeks ago, spent the break working with new mechanic Jarrod Pyne in order to build a new bike, virtually from the ground up in preparation for the South Australian event.

"At Darwin I felt like my conditioning and riding was where it needed to be to win, I was not lacking anything in that department, but our equipment was not there. " Hill explained.

"We had some issues and I just had to ride it around, I never got to show my true self at Darwin, I was left to entertain the spectators in Monster Energy hospitality throwing whips over the triple.

"I hired Jarrod Pyne as my mechanic and he has been such a big help, I really don't think I could have gone out there and won without him, I really had the confidence in the machine this weekend," he added.

It did not take Hill long to feel comfortable on the technical Mount Gambier track, posting the third fastest time in qualifying before finishing a close second to Jake Moss in heat race that had the crowd on their feet cheering. Closing in on his fellow Suzuki rider in the final laps, Hill and Moss got into some cat and mouse games in the run to the line.

"The heat race was all a bit of fun and games, " Hill commented. "I seen an opportunity to come under Jake and he slid out and kind of fell into me and we bumped a little bit.

"The next corner was muddy down on inside and I knew I could not protect it, so I slowed down and tried to keep him to my left, but he caught on to what I was doing. There was a little bit of cat and mouse and some block passing, it was all in good fun, well for me anyway, certainly no bad blood from my end even though he beat me in that race." 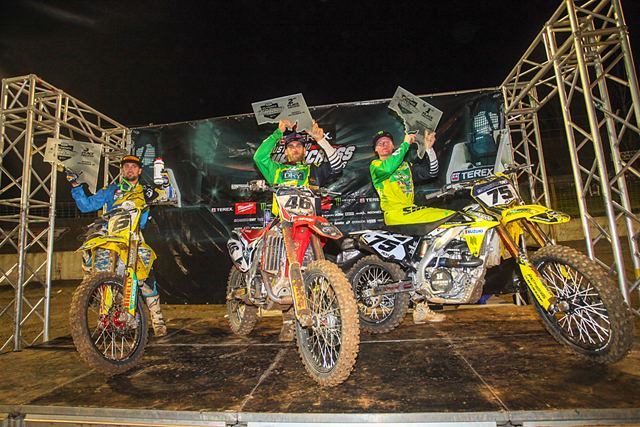 Josh Hill far right celebrates his Round 3 Australian Supercross Championship round win - Credit: Aaryn Minerds
When the gate dropped on the main event Hill quickly slotted into second place just behind the leading championship leading Suzuki of Matt Moss and stalked the current Australian Motocross champion for the first five laps of the race.

A crash from Moss on lap five left Hill with the race lead, a lead he would never relinquish, going to his first race win in Australia in front of very vocal crowd who had warmed up quickly to the kind spirited American who was throwing down some huge whips during the day.

"It felt good to get that win, "Said a delighted Hill after the main event. "Darwin was a bit of a struggle and about as bad as a weekend as you could have, we had bike set up issues, we just showed up un-prepared. This weekend was the complete opposite, we were prepared and it showed with our result.

"This weekend's track was definitely a lot closer to a Supercross track that I am used to, the dirt actually broke down and reminded me a little of a Seattle Supercross, the jumps broke away and you really had to concentrate on your lines to keep a rhythm.

The round win sees Hill move up to 4th place in the championship, just 2 points behind fellow American import Weston Peick in third and only 10 points of the championship lead at the half way mark of the series.

Catch Josh Hill and the Hart and Huntington / InsureMyRide Suzuki team in action next weekend the 19th and 20th of October at Phillip Island for rounds four and five of the 2013 Australian Supercross Championship which will be held alongside the Australian round of the MotoGP.