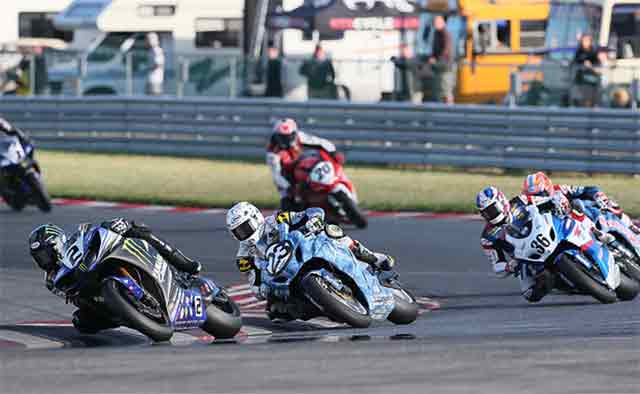 Amazingly, earlier in the race his title chances seemed much more likely to be extinguished than bolstered. Meanwhile, the championship hopes of defending triple king Josh Hayes took a severe blow despite the Yamaha duo's unusual races playing out in remarkably similar fashion.

After all the ups and downs were tallied, Herrin was credited with the win, while National Guard Jordan Suzuki's Roger Hayden and Yoshimura Suzuki Factory Racing's Martin Cardenas rounded out the podium.

And, for the second time this year, Hayes took the checkered flag first but wasn't awarded the victory, placed fourth in the final race results after being assessed with a jump-start penalty -- his third such infraction of an uncharacteristic '13 campaign. However, Hayes' penalty was far from the only footnote that made Saturday's race an oddity.

A pair of warnings of impending disaster for the champ and the dominant Monster Energy/Graves/Yamaha squad backing him were raised during Saturday's morning qualifying. Hayes, despite locking down his 28th career SuperBike pole at the conclusion of the session, saw both his 'A' and 'B' YZF-R1s malfunction with electrical issues.

Yamaha's worst fears were then realized at the race's start. Not only did the defending champ suffer from an electrical malfunction just a few turns after he made his launch at the green light, but so did teammate and fellow title hopeful Herrin. The two blue machines were forced to pull off and immediately plunged to the back of the order while Suzuki ace Cardenas -- Yamaha's biggest championship threat -- grabbed the holeshot and powered into the lead.

Yamaha's twin troubles brought back memories of Hayes' season-opening disaster at Daytona International Speedway in March, in which the Mississippian twice saw likely victories transformed into mechanical retirements. Making matters worse for a suddenly luckless Hayes was the fact that he was also hit with the aforementioned five-second penalty for jumping the start.

However, Hayes and Herrin both managed to right the issue by restarting their machines on the opening lap and the duo then began slicing their way forward while Cardenas tussled with Hayden at the front. In a most fortuitous turn, the Yamaha riders' near-impossible task of fighting back into contention was made manageable after seven laps when the race was halted and subsequently restarted due to fluids deposited on the circuit by the Neyra Racing machine of Huntley Nash.

After an extended clean-up period and a brief practice for course evaluation, the field was re-gridded for a 13-lap second half. Cardenas opened from pole this time while Hayes and Herrin restarted well down the order. Herrin made the most of his second chance, storming from Row 3 to take the lead on the opening lap of the restart while the opposite occurred for Hayes. The champ made contact with Hayden entering Turn 1 and dropped down the order once again, forcing him to dig deep and embark on yet another forward charge.

The final 13 laps saw Herrin, Cardenas, Hayden, Jordan Suzuki's Danny Eslick and a motivated Hayes wage a relentless and unforgiving heavyweight fight for supremacy -- at least on track. Hayes -- along with Eslick -- were saddled with five-second penalties but battled for position all the same.

Hayes ultimately showed his caliber by systematically working his way to the front, at last taking the lead (again, on track) with two laps remaining. A surprised Herrin nearly highsided while attempting to counter Hayes' ascension, but quickly calmed himself. Realizing that Hayes was actually behind in the official order due to his penalty, Herrin regrouped in time to strike past Cardenas in the race's final corner to steal away a vitally important victory at the flag.

After claiming his fourth-career SuperBike victory, Herrin said, "It was awesome -- it really couldn't have gone any better. We got really lucky with the red flag. We had to start tenth, and something was up with the bike. I haven't used the R1 without launch control since I've been on it -- not even a practice start. But we had to on the restart and it went great, so I may just take the launch control off from now on. We went from tenth to first on the first lap, so it was pretty awesome.

"That battle with Martin was amazing. It was a lot of fun, and I really wanted to get the [point for] most laps led. Whenever Josh went by, I panicked for a second because I had a feeling that he had charged from behind and was going good. I thought I had to keep up with him because I needed this race win. After that huge moment that I had, I realized he had that five-second penalty so I kind of backed it off a little bit. I figured if he could beat me by five seconds in a lap-and-a-half, I had other things I needed to worry about... But it was a lot of fun. I'm looking forward to tomorrow and I'm really happy I was able to capitalize on Josh's jump start and get an even bigger cushion in the points."

Runner-up Hayden said, "The first half of the race before the red flag was going pretty good. Me and Martin had a pretty good pace going there. We had a nice gap on the guys behind us, so I really didn't want to see that red flag. I was just going to sit back there and wait to the end. But that's the way it goes sometimes. In the second part of the race I got another good start, but just wasn't strong enough to get past these guys anywhere. It's pretty easy to stay there but to get by them is difficult... I wanted to stay close enough just in case they got too close I could capitalize. In the last corner there Josh got underneath Martin and pushed him wide and I was able to get second."

Third-placed Cardenas said, "The race was incredible -- a lot of passing and a lot of battling with these guys, especially Herrin. Unfortunately, the result wasn't what we were expecting, but I'm very happy with the race. The Yoshimura Suzuki worked very good. We're looking forward to tomorrow, and we're hoping for a similar race with a result that's a little bit better."

Hayes, meanwhile, was credited with fourth despite taking the checkered flag first. In many ways, the contest encapsulated Hayes' difficult 2013 campaign in which repeated misfortune and mistakes have left his chances for an unprecedented fourth championship in doubt despite routinely dominating practices, qualifying sessions, and races.

Herrin now approaches the season's final two races in a commanding position. With 295 points, he boasts an imposing 19-point advantage over Cardenas while Hayes sits a mammoth 28 points back in third with precious little time remaining to make up the deficit.