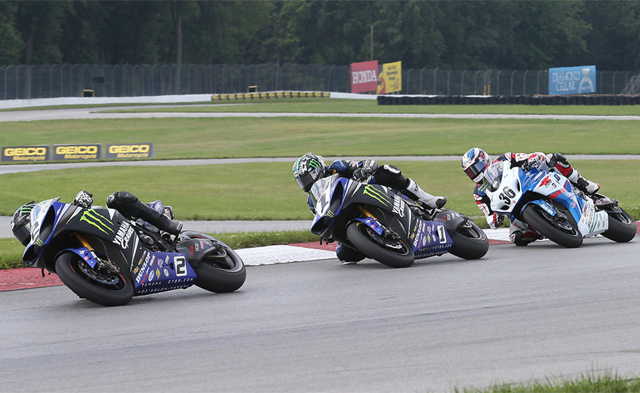 Unfortunately for Hayes and to Herrin's good fortune, the Mississippian actually required a margin of five seconds to fully make up for the penalty he was given for jumping the start. As a result, Herrin was awarded his second-career premier-class victory to conclude the Buckeye SuperBike Weekend presented by Dunlop Tire at Mid-Ohio Sports Car Course.

In its early stages, the 21-lap contest looked as if it would shape up to be a thrilling three-man dogfight for the win. Hayes ran in first but was shadowed by both Herrin and National Guard Jordan Suzuki's Roger Hayden over the opening eight laps. However, the race was delivered a pair of big twists moments later; Hayden ran off track, overshooting the hard-braking Turn 6, at nearly the same time that Hayes was judged to have jumped the start and assessed his five-second penalty.

Informed of the situation by his crew, the defending triple champ immediately went to work in an attempt to shake Herrin and assemble the requisite gap on track.

However, Herrin's recent efforts, which included running lap after lap by himself during practice and qualifying this weekend in order to improve his clear track pace allowed him to cling onto Hayes for an extended period and then maintain lap times that proved just strong enough even after the champ pulled clear and eliminated Herrin's ability to gauge off his teammate's rear tire.

Despite their physical separation on track, the race to the checkered flag was as tense and exciting a conclusion as the GEICO Motorcycle AMA Pro Road Racing series has enjoyed in some time.

Hayes whittled away at the five-second penalty and took the white flag with 0.737 left to be made up. Despite his relentless pace, he ultimately came up a meager 0.122 seconds short of accomplishing the goal and closing out his third consecutive double victory weekend.

While Hayes was very aware of what he was up against, Herrin later admitted that he was clueless that he was actually battling for the win. Incredibly, the Georgian later explained that he was pushing hard because he was afraid he was being tracked down and in danger of losing what he thought to be a runner-up result.

"I guess that was kind of a crazy race." Race winner Herrin remarked, "I had no idea that I won the race until I was interviewed for television and I was kind of shocked for a second.

"I couldn't even say anything. Josh really rode a great race as he does every time he gets on the bike. He's proven over the past three years that he's a GP quality rider.

"I just have to thank him for all the help that he's given me. I really lucked out today. We'll take it, a win's a win and we'll move onto Laguna with a lot of confidence, just in the way that we rode.

I think we rode pretty well today, even though Josh beat me by so much. I was proud of the way I was able to keep a consistent pace by myself and hopefully Laguna goes just as well," Herrin concluded.

"You know, I'm proud of the way I rode the race." eventual race runner up Hayes stated. "I made one little mistake and the race was going okay, I was pushing absolutely as hard as I could and I had a few moments in the six-to-three laps to go range.

"On the white flag lap I had a little front-ender but I just kept pushing as hard as I could. I was able to stay in the '25s and I put in the best last lap that I could.

"Big congratulations to Josh, he did a great job. I know he's been working on pace and I know he got stuck out there by himself, so I think the work paid off for him today. He was able to keep a good enough pace that I couldn't overcome it."

Yoshimura Suzuki Factory Racing's Martin Cardenas rode a lonely race to complete a double third-place weekend, hitting the stripe more than 13 seconds off the win (and more than 18 seconds behind Hayes' genuine pace).

"It was a very tough race for me today," The Colombian said, "I didn't quite have the pace today. I had maybe the same pace as yesterday but these guys were a little bit faster.

"I did everything I could and maybe halfway through the race I had a few moments and realized I wasn't going to catch the front. So I tried to stay conservative and maintain the gap that I had behind me.

"Today's race was a little bit disappointing for me, I was hoping for a little better. But anyway, thanks to the Yoshimura team, we've been working hard and we'll keep trying." Cardenas concluded.

Jordan Suzuki's Danny Eslick finished some distance back in fourth but also well clear of the heated three-man scrap for fifth, waged by Erik Buell Racing teammates Geoff May and Aaron Yates, and KTM/HMC Racing's Chris Fillmore. Fillmore held the spot early but was ultimately overhauled by both fifth-place finisher May on the Team Hero EBR 1190RS and sixth-placed Yates aboard the Team AMSOIL/Hero-backed machine.

Hayden recovered well enough to charge back to eighth as minor consolation in what's what's been a deeply disappointing weekend for the Kentuckian.

Beaubier had to work for this one, topping JD Beach by just 0.655. Beach's RoadRace Factory/Red Bull teammate Jake Gagne finished third in the race shortened to 15 laps after a crash on the fan lap caused a lengthy clean up.

Beaubier had to move through the field and gain positions one at a time, having gotten off the line in fifth place. Although Beaubier was able to take the lead from Beach on lap six, Beach did not concede the win. Beach actually closed on Beaubier late by virtue of the race's fastest lap on the white-flag lap.

"At the beginning, I was a little timid going into the left-hander," said Beaubier. "I could hear JD on me the whole race, especially in the last turn. He was there the whole time, and it was tough." Cameron added that he had tried to pull away, but couldn't shake Beach.

Beach earned his best-ever Daytona SportBike result in the contest and did a great job of holding Gagne at bay, too.

Gagne had a tough time with National Guard Celtic Racing's James Rispoli, who ultimately finished fifth. As has been the case in other races this year, Rispoli was very strong in the opening laps but managed to earn his best Daytona SportBike finish yet even though Garrett Gerloff (Yamaha Extended Service/Monster Energy/Graves/Yamaha) edged him out of fourth place by 0.2).

Team 95's Gillim emerged victorious in the red-flagged race despite opposition from the likes of RoadRace Factory's Tomas Puerta and Harv's H-D pilot Travis Wyman. Although Gillim had earned spectacular SuperSport victories in Utah and New Orleans in previous seasons, the Kentuckian had been shut out in the win column in 2013 until Sunday.

After a restart, Gillim was fourth but quickly dispatched Miles Thornton (CTR Racing) as Puerta passed Wyman for the lead. But Puerta had a machine issue just as he took the lead, and he pitted. Gillim and Wyman dueled at the front until the end, trading the lead until Gillim seized it with a bold move on the last lap.

"These guys were running a really good pace, too," said Gillim, who won by 0.184 of a second. "Travis got out in front. The last couple of laps, we were going at it. I wasn't aware that he had a penalty, so I was racing for the win. It was a really fun race."

Miles Thornton topped off his excellent weekend with third place. Thornton emerged on top of the scrappy battle with points contenders Corey Alexander and Stefano Mesa. Alexander (National Guard/Celtic Racing) made a tight pass on Mesa late. Mesa responded with his best lap of the event but couldn't counter a move.

Alexander now leads the points by 9, but now Gillim is second after his great weekend with Mesa a further five points back. "I'm in the points lead after Stefano falling yesterday, but Hayden is coming on strong," said Alexander. "Every position is crucial."

Nick McFadden (TOBC Racing) was next in the running order. He nudged Oklahoma's Connor Blevins of Ajax Kawasaki.