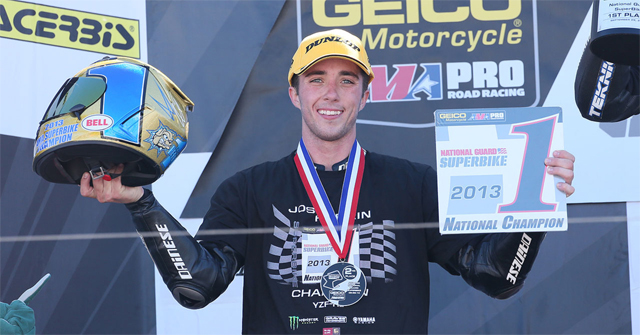 Three-time series champion Josh Hayes demonstrated his superiority in terms of outright pace en route to scoring his eighth victory of the season in a blowout, but it still wasn't enough to overcome the consistent excellence of his 23-year-old Monster Energy Graves Yamaha teammate Josh Herrin.

Just as he has all year long, Herrin maximized the opportunities he was given and did exactly what he had to in order to secure his first-career GEICO Motorcycle AMA Pro Road Racing title.

While the outgoing champ raced off into the sunset and took the checkered flag by a margin of 13.434 seconds, second-year National Guard SuperBike ace Herrin registered a calculated ride to a clear runner-up result, clinching the '13 premier-class crown in the process.

"I think the best word to describe my season is 'consistency," Herrin commented "We were real consistent all year. At the beginning of the year I wasn't even thinking about the championship.

"We got lucky at Daytona, but I figured Josh would come back, and he did. We got lucky at a lot of races, but at the same time we were smart and rode real consistent and it paid off in the end. Overall, it went great."

"This has been a lifelong dream of mine, and it's finally come true," Herrin continued. "I can't even explain the emotions right now. Coming around that last lap, I just filled up with tears.

"I could barely see where I was going. I've never felt that kind of emotion before. It's crazy the emotions you feel when you achieve something you've been waiting to do your whole life."

On the occasions in which Hayes was able to avoid trouble, whether mechanical issues, jump start penalties, or his crash from the lead in Utah, he proved unstoppable. That was the case again this weekend, as he scooped up all available points and earned his 41st career SuperBike victory. However, the damage was already done, and he was unable to prevent his young teammate from usurping his throne.

"It was a great weekend. This is two good Laguna Secas this year for me," Hayes said after the race. "I've had a great season and I'm proud of the things I've accomplished.

"My statistics are good. I was able to get eight pole positions, I think I've gotten all poles except two in three years, which is a pretty amazing run. It's fun to be fast. And I had a good run of races this year. It's just when I get it wrong, I really get it wrong apparently."

Hayes was gracious in defeat, saying, "I really think the story today is Josh [Herrin] winning his #1 plate. He did what he needed to do and when the pressure was on, he stepped up."

The race for the remaining spot on the podium was drama-laden. Yoshimura Suzuki Factory Racing's Martin Cardenas, who carried slim title hopes into this race, as well, pressured Hayes early in the contest but the pace proved too much. The Colombian's season ended in sparks when he crashed from second while working the race's second lap.

With Cardenas out of the picture and the Michael Jordan Motorsports duo of Roger Hayden and Danny Eslick concentrating on FIM Superbike World Championship duties this weekend at Mazda Raceway Laguna Seca, KTM/HMC Racing's Chris Fillmore and Foremost Insurance Pegram Racing's Larry Pegram each eyed a prime opportunity to earn a top-three finish.

The two runners raced in close proximity the entire distance and traded the position multiple times on the final lap. Up-and-comer Fillmore got the upper hand and looked set to claim the first-ever SuperBike podium finish for himself and his KTM. However, disaster struck at the last possible moment, as Fillmore's machine ran low on fuel and lost power exiting the race's final corner with the checkered flag in sight.

That allowed Pegram to storm by and steal away third -- his first podium since his twin thirds in the '13 season opener at the Daytona International Speedway.

"I knew (Fillmore) was going to try to make a move at the end," Pegram explained. "He came into the last corner (on the penultimate lap) and put a block pass on me. It's funny, everyone thinks the KTM is so much slower than the Yamaha and it is on the top end, but his bike was really good out of that corner.

"He could get it stopped and still pull me because mine was wheelie-ing so much. I passed him going into 2, but I got a little wide and he came under me. I passed him into 5 and we went side-by-side. When I passed him in 5, it pushed us both wide and I got stuff all over my tires when I went wide.

"I got really sideways going into 6 and I kind of lost him a little bit. I was going to try to catch him in the last corner, but luckily I wasn't as close as I probably should have been. I was trying to square him up and something happened to his bike.

"I almost hit him, so it's probably lucky I was about a bike-length back," he concluded.

A dejected Fillmore pushed his RC8R across the line, ultimately being credited with seventh position.

Clark joined teammate Cardenas on the sidelines with a fall of his own, while Anthony eventually faded from the group. West worked his way forward, finally arriving in fifth, which was elevated to fourth at the line as a result of Fillmore's misfortune. Yates followed him home in fifth.

Knapp was the final man to overtake Fillmore, dropping his teammate to seventh when he took the checkered flag in sixth.

Despite crashing on Saturday and riding sore on Sunday, Beaubier won his 10th race in a row to cap off his record-breaking year. JD Beach took third, defending a move from Garrett Gerloff on the last lap to earn a hotly-contested podium position.

For Yamaha Extended Service/Monster Energy/Graves/Yamaha pilot Beaubier, the race proved to be a considerable challenge. He spent the early laps mired outside the top five as Meen Motorsports' Lewis, Beach on the RoadRace Factory/Red Bull squad, and Latus Motors Racing's Jason DiSalvo led the final AMA Pro GoPro Daytona SportBike race of the year. Gerloff also pushed near the front as a seven-rider pack began the 20-lap race.

Despite a sore knee, Beaubier managed to slice up the charts, and the Californian harried 19-year old Lewis before making his move exiting lap two after Lewis ran ever-so-slightly wide on lap 18.

"This morning, I was pretty stiff in warm-up and didn't know what to expect," said class champion Beaubier. "In the race, I decided to take it a little bit easy in the beginning.

"My knee was hurting pretty good but, as the race went on, it loosened up some, and I was able to start putting down some fast laps. Jake (Lewis) was going really fast.

"I put my head down and was able to get a win. Thanks to the Yamaha Extended Service/Monster Energy/Graves/Yamaha crew after I gave them some extra work this weekend," he concluded.

Beach's defense of third over Gerloff meant the Texan wasn't able to move up in the championship. RoadRace Factory/Red Bull's Jake Gagne retained second in the standings over Gerloff despite the late season charge from the #8 pilot. Gagne, racing with a broken collarbone, earned 11th in a painful display of fortitude.

Lewis entered the race in a standings tie with fellow rookie, National Guard/Celtic Racing's James Rispoli, but took the spot after his excellent race. Rispoli was classified 32nd.

DiSalvo ended up fifth, ahead of Riders Discount Racing Triumph's Jake Zemke. Dane Westby closed out the season seventh on the track and sixth in points for the GEICO Motorcycle Honda team.

RoadRace Factory/Red Bull's Tomas Puerta was eighth in his GoPro Daytona SportBike debut. The 2013 Motorcycle-Superstore.com SuperSport Overall champ raced in the battle for fifth and topped vets Bobby Fong (D&D Cycles/Castrol/Triumph) and Fernando Amantini (Team Amantini) as he moves up to Daytona SportBike next season.