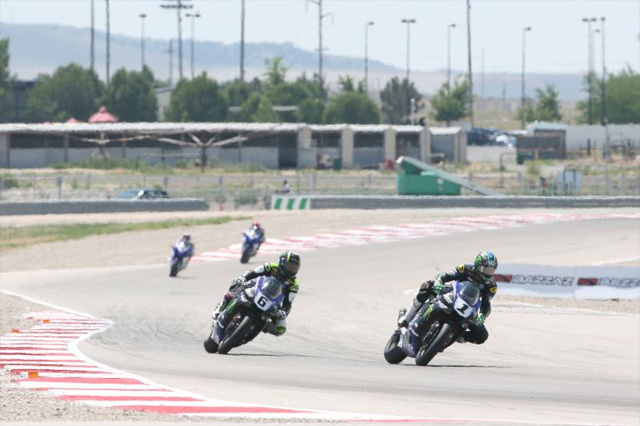 Hayes and his Monster Energy/Graves Motorsports Yamaha R1 did on Sunday at Miller Motorsports Park what he's done so many times over his career - he swept a doubleheader, recording the 54th and 55th Superbike wins of his career on a day that featured temperatures in the triple digits in Utah.

The two wins, combined with his teammate Cameron Beaubier's two runner-up finishes, translates to Hayes leaving Miller with the points lead in the 2015 MotoAmerica AMA/FIM North American Superbike Championship - albeit by just four points with a three-week break before the series heads to the Monterey Peninsula for round seven of the nine-round series at Mazda Raceway Laguna Seca.

With Beaubier second in both races, third in both fell to Yoshimura Suzuki's Roger Hayden, though he deserved better in race two. In the heat of a battle with Hayes for the win, Hayden's Suzuki encountered a mechanical problem that forced him to go into survival mode. Beaubier was able to catch and pass the Kentuckian and it left Hayden with another third-place finish - his sixth of the season to go with his three runner-up finishes.

Hayden's Yoshimura Suzuki teammate Jake Lewis carded a pair of fourths on the day to maintain his third in the championship, though Hayden is closing in and now trails the series rookie by just two points, 171-169.

In race one, Hayes and Beaubier battled for the entire 18 laps with the veteran besting his young teammate by just .280 of a second. Hayden struggled in race one and couldn't keep pace with the two Yamahas, finishing 13.9 seconds behind and less than a second ahead of teammate Lewis.

Fifth overall went to Josh Day, the Westby Racing rider taking the Superstock 1000 win in the process. Sixth overall and fifth in Superbike was Chris Fillmore, the KTM factory rider turning in a good effort to hold off Turbo Turtle Racing's Danny Eslick by less than half a second after their race-long battle.

Then came TOBC Racing's Taylor Knapp in eighth overall and second in the Superstock 1000 class, just a tick ahead of Aprilia HSBK's Sheridan Morais, who was third in Superstock. Bernat Martinez rounded out the top 10 overall with his seventh-place finish in Superbike. 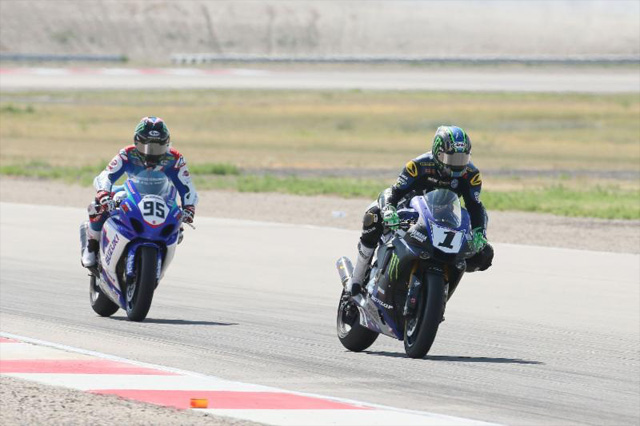 Josh Hayes (1) leads Roger Hayden (95) during their battle in the second Superbike race on Sunday. - Credit: Brian J. Nelson.
Hayden got his race-one woes fixed to run at the front of race two with Hayes, the Suzuki rider pestering Hayes for most of the race and even leading at one point. But then the Suzuki slowed and Hayden was forced to abandon the chase, watching Hayes disappear in the distance and then also getting passed by Beaubier. All that allowed Hayes to cruise to his seventh win of the season.

"It's an incredible weekend," Hayes said after his doubleheader sweep. "It's tough sometimes when Cam (Beaubier) keeps beating me session after session and you just have to keep your wits about you and stay the course. The team's always a huge help and a bit inspiration for me when it comes down to doing the work.

"We work well together and we stay steady and finally find ourselves in positions like this. I'm just excited I'm still in the show after falling down in Atlanta. We'll keep plugging away and find ourselves in a good spot so big thanks to my team."

The Superstock 1000 victory again went to Day, the R-1 mounted Floridian ending up fifth overall after barely holding off Fillmore, who was again a fighting sixth overall and fifth in Superbike.

Then came Morais, who this time got the better of Knapp. Superstock 1000 Championship points leader Jake Gagne was credited with seventh in the Superstock class after crashing, remounting and riding the rest of the race without brakes. Gagne was a non-finisher in race one when his R1 suffered an electrical problem.

Gagne still leads the championship after a difficult day for the Roadrace Factory Rider, 209-192, over Knapp.

"Things went a lot better for us this weekend," Day said. "I wish we could have found our problem with the front a lot sooner so we could have been up there at the other races, but it is what it is and that's how racing goes sometimes. But now we have it all sorted pretty well and we should be good for us for the rest of the year." 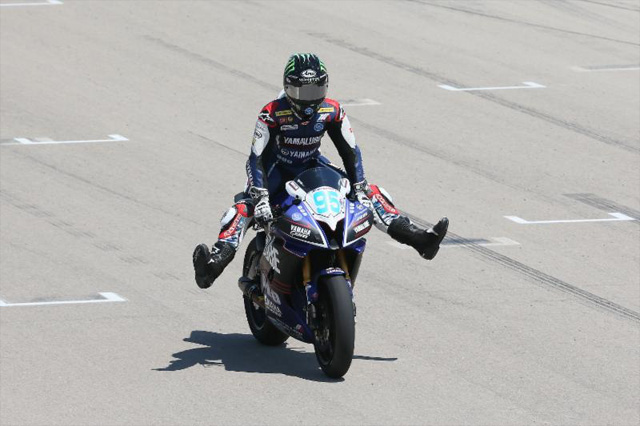 Beach put his head down from the start and pulled away at a clip of a second a lap virtually at will, slowing to celebrate across the finish line with a margin of victory of 9.9 seconds over Latus Motors Racing Triumph's Bobby Fong and Beach's teammate Garrett Gerloff. It was a dominating performance and Beach's fifth in a row and seventh of the season.

Fourth place went to South African Cameron Petersen, the Roadracing Factory rider having his best weekend thus far in what is his rookie season of racing in the U.S. Petersen was a spot better than he was on Saturday, reversing the finishing order with M4 Suzuki/SportbikeTrackGear.com's David Anthony, who had bested him for fourth a day earlier.

"Going into the race I was feeling good," Beach said. "We had a really good race yesterday and I was just hoping I could repeat it. I knew Garrett (Gerloff) and (Bobby) Fong and (Josh) Herrin were going to be going a lot faster today and the first few laps would be really important.

"My team just gave me an awesome bike today and this weekend and now it's time to start doing our homework and getting ready for Laguna Seca." 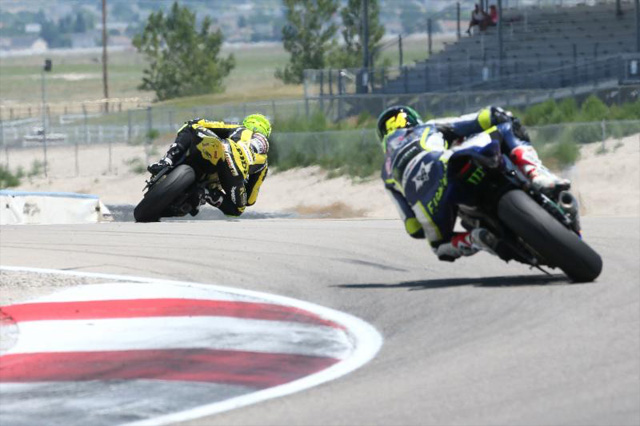 Unlike the day before, Roberts had his hands full with his series rival Richie Escalante, the Tizuyuca, Mexico, resident finishing just .225 of a second behind Roberts.

Third place went to Tuned Racing's Bryce Prince, the Californian riding mostly alone after ditching the pack he was racing with early on.

"I tried to be consistent in the low 29s," Roberts said. "We were a bit off the qualifying pace, but it's so hot out and the tires weren't really hooking up as they were in the qualifying so low 29s I thought was a good pace. I just held out and brought it home for the victory." 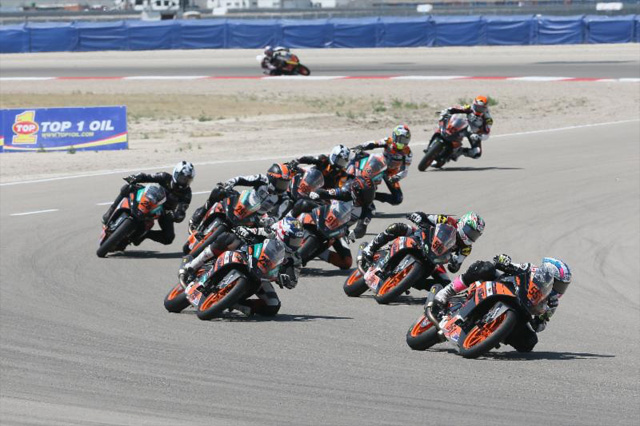 Braedan Ortt (551) won the KTM RC 390 Cup race after a frantic battle with a host of others, including Hayden Schultz (259) and Anthony Mazziotto III (516). - Credit: Brian J. Nelson.
Braeden Ortt won his first KTM RC 390 Cup race of the season in Sunday's race two, the 15-year-old Canadian coming out the best of a massive pack fighting for victory.

At the flag, Ortt was just .346 of a second ahead of 14-year-old Brandon Paasch, the rider from New Jersey making his debut in the MotoAmerica KTM RC390 Cup a successful one. Paasch, who normally competes in the Moriwaki Cup in the British Superbike Series, was just a fraction of a second ahead of Anthony Mazziotto III.

Hayden Schultz and series points leader Gage McAllister were also in the battle for victory with those two finishing fourth and fifth ,respectively.

McAllister now has 127 points to Ortt's 80 points with Ortt moving past Hayden Schultz for second in the title Chase. Schultz, fourth today, is three points behind Ortt.

"I managed to line it up perfectly and try to break the draft and it worked out really well for me," Ortt said.