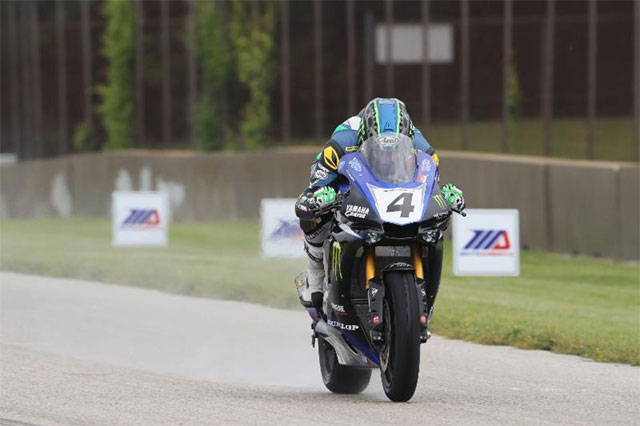 Josh Hayes has taken Superpole for the Honda Superbike Showdown of Wisconsin at Road America.

The session was held in wet conditions and four-time Superbike Champion Hayes dominated, the Monster Energy/Graves Motorsports Yamaha rider mastering the conditions to lap at 2:30.734. It was the 39th Superbike pole of Hayes' career (and his sixth at Road America) and rather remarkably his first of the 2016 season.

"By memory, I feel like the track is in much better condition than it was last year," Hayes said.

"The improvements in turns five, six, eight and the last turn are really good. There is a lot of grip in those sections of the racetrack. I was watching the previous section session (Superpole 1) where they were showing Hayden (Gillim) and (Claudio) Corti and those guys going through there and I felt pretty confident about it.

"I was able to get up to speed pretty quickly. I had a big group behind me and I didn't want to bring them all along with me. I got one in the books and then steadily chipped away from that point on and I definitely had some limitations and some things with my motorcycle that kept me from going a little bit quicker, but all in all I got a little lucky. In the dry, I haven't quite had the pace but I feel pretty good about the race. I think I will be able to dice it up and be in the race."

Spaniard Toni Elias and Cameron Beaubier will join Hayes on the front row, the latter ruining his chances of challenging his Yamaha teammate with a crash during the session. Elias rode his Yoshimura Suzuki to a best of 2:32.514 - 1.790 seconds behind Hayes. Beaubier's best was a 2:32.628, but he has the confidence from being the fastest rider in all three of the dry Superbike practice sessions and tomorrow's forecast is dry and sunny.

The second row of the grid will be led by Elias' Yoshimura Suzuki teammate Roger Hayden. He will be joined there by Broaster Chicken/RoadRace Factory's Jake Gagne and Aprilia HSBK Racing's Claudio Corti, the Italian coming through to Superpole 2 from Superpole 1. He was also the fastest of the Bazzaz Superstock 1000 racers.