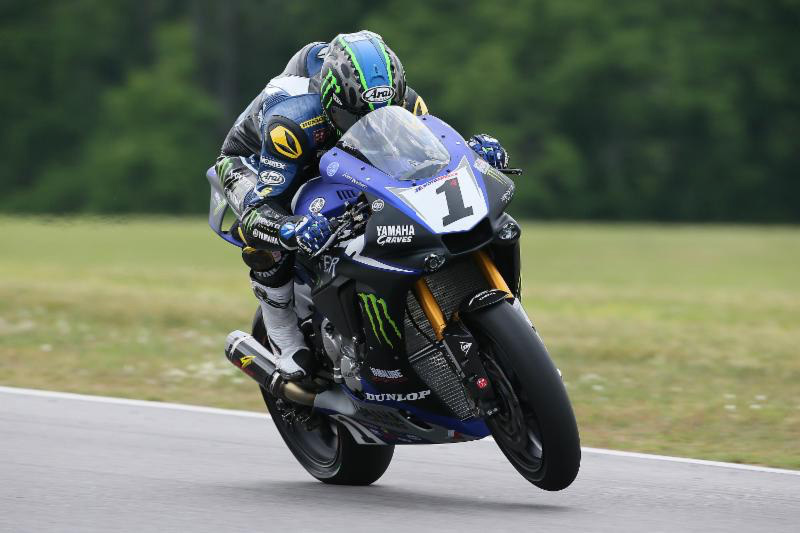 For Hayes it was career pole position number 37 and it was one he definitely earned, ending the session just .030 of a second faster than his Monster Energy/Graves Motorsports Yamaha teammate Cameron Beaubier.

"Right from the get-go I was pushing pretty hard and I wasn't too far off," Hayes explained. "I was definitely making a few mistakes and I'd do one [lap] and think, 'Oh, that's going to be the one.' And it would be within a 10th of the previous one. I'd put together another one [lap] and I'd be like, 'I've got it this time.' Nope. I found myself in a group of people and then cruised around.

"Everybody wanted to ride with me I think, so I rode through pit lane and rode back out with some clear racetrack. During my last lap I was riding around going, 'Man, it's not working that good. I I hope it's a 25.' It ended up being a pretty decent 24 [a 1:24.868]."

Both of the factory Yamaha men encountered their share of troubles on Friday. Hayes was lucky to walk away uninjured from a big crash that destroyed one of his motorcycles, and Beaubier missed almost an entire session when both of his R-1s had mechanical woes. Both, however, bounced back today, setting up what should be two thrilling battles tomorrow.

Yoshimura Suzuki's Roger Hayden, meanwhile, will also likely be in the mix as he fills row one for Sunday's two races, the Kentucky resident admitting that he was having troubles with "the rider and not the bike."

Row two will be led by Superstock 1000 class riders Jake Gagne on the Roadracing Factory Yamaha and Westby Racing Yamaha's Joshua Day. They will be joined there by returning Superbike racer Danny Eslick on the Turbo Turtle Racing Honda CBR1000RR. 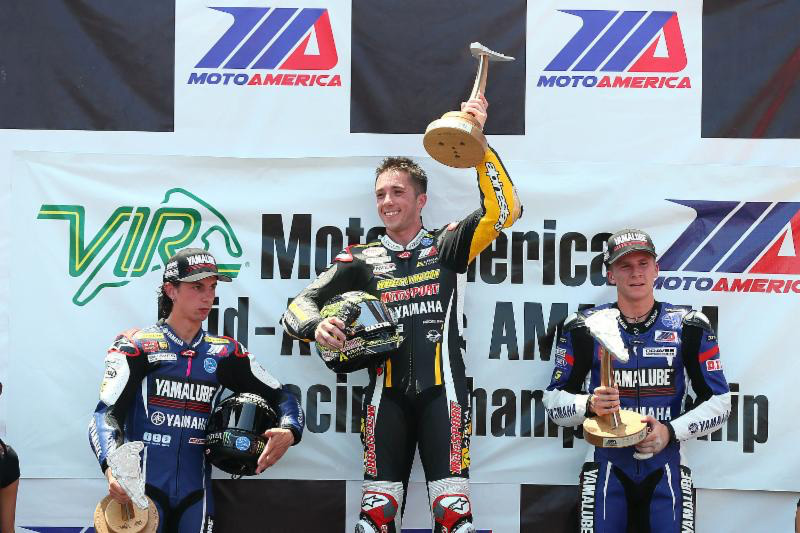 Unfortunately, for Beach, it was Josh Herrin who led the lap that counted most. The last one. The win, Herrin's second in four races, allowed the Georgian to claw his way back into early season championship contention as the 2015 MotoAmerica AMA/FIM North American Road Racing Championship got round three rolling under brilliant sunshine in Virginia.

It was Yamalube/Y.E.S./Graves Motorsports Yamaha's Beach who led the field away at the start from pole position, with Herrin and his Wheels In Motion/Motosport.com/Meen Motorsports Yamaha R-6 matching his every move.

The two stayed locked together for the duration with Beach always in front, Herrin always his shadow in second place. But on the final lap, Herrin made his move, putting his R-6 up the inside of the similarly mounted Beach in turn 10 and leaving him no time for any sort of retaliation. At the finish line, Herring was a scant .100 of a second ahead of Beach.

"Road Atlanta was a different story," Herrin said of his first win a month ago in Georgia. "I was really confident going into the race.

"Today, when JD [Beach] threw down that lap in qualifying and I couldn't match it... to be honest, I was kind of worried going into the race. When I saw we were doing low 27s [1:27 lap times] and I'm sure a couple of laps he did high 26s, there was nobody showing me a wheel and we were all just comfortable there and waiting. Like I said before, there's no points for most laps led anymore so there's no point wasting my tire trying to battle with him and letting the guys behind us catch up.

"We're both real aggressive riders and we'd pass each other back. I was trying to play it smart and get some points. If we could get him at the end, we'd celebrate, but if we didn't we'd get some points."

The championship leader coming in to VIR was Beach's Yamaha teammate Garrett Gerloff. And it was Gerloff who still led the series after the first of two Supersport races here today - thanks to a gritty performance with the Texan racing with a badly broken pinkie finger on his left hand.

The injury was a result of a crash on Friday, but Gerloff wrapped it up and stuffed it in his glove and went racing, besting M4 Suzuki/SportTrackGear.com's David Anthony by just .200 of a second to finish third. Latus Motors Racing Triumph's Bobby Fong was also in that battle for most of the race, eventually finishing fifth.

Gerloff's effort kept him in the championship lead heading into tomorrow's second race. Gerloff has 81 points, two more than Herrin's 79. Beach is just another two points behind with 77 points. 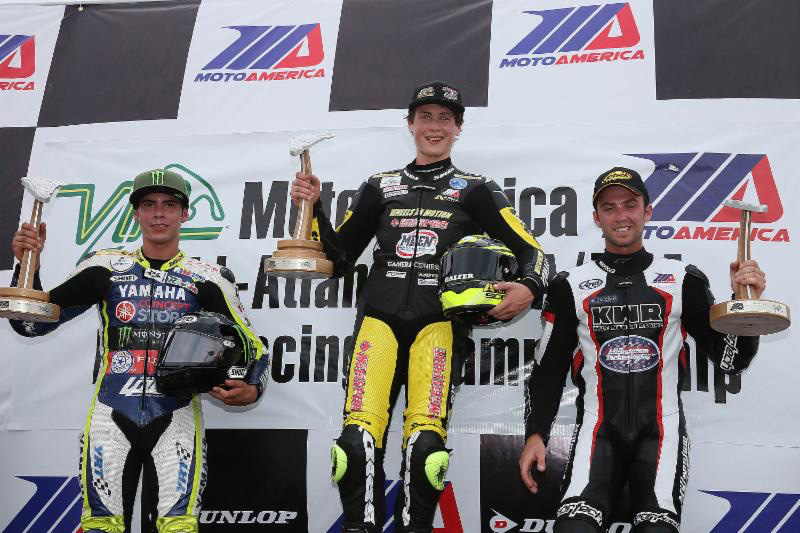 (From left to right) Richie Esclanate, Joe Roberts and Travis Wyman celebrate their podium finishes in Saturday's Superstock 600 final at VIR. - Credit: Brian J. Nelson.
When Herrin won on Saturday at Road Atlanta, his Meen Motorsports teammate Joe Roberts also came away victorious in the Bazzaz Superstock 600 final. Today the team did the double again, with Roberts keeping his perfect 2015 season intact with his third win in three starts on his Yamaha R-6.

This time, Roberts had it a bit tougher with Escalante Racing's Richie Escalante chasing hard until coming out on the bad end of a run through lapped riders. That allowed Roberts to open a lead that resulted in a margin of victory of 2.427 seconds.

"At the start of the race, I didn't know he was there," Roberts said of Escalante. "I thought I saw plus two [seconds]. I was trying to work out to keep that pace and see if I could pull away and all of a sudden down the front straightaway he came blowing by me.

"So it was point-two [of a second], not plus two. It was a great race. I wasn't expecting him to be that close by looking at the qualifying times, but he definitely stepped it up for the race. It will definitely be a battle tomorrow."

Roberts and his perfect points tally of 75 leads the series over Escalante by 22 points. Kyle Wyman Racing's Travis Wyman, who scored his third podium of the season in three starts today with his third-place finish, is third in the title chase - just a point behind Escalante, the Mexican National Champion in his first full season of racing in the U.S.