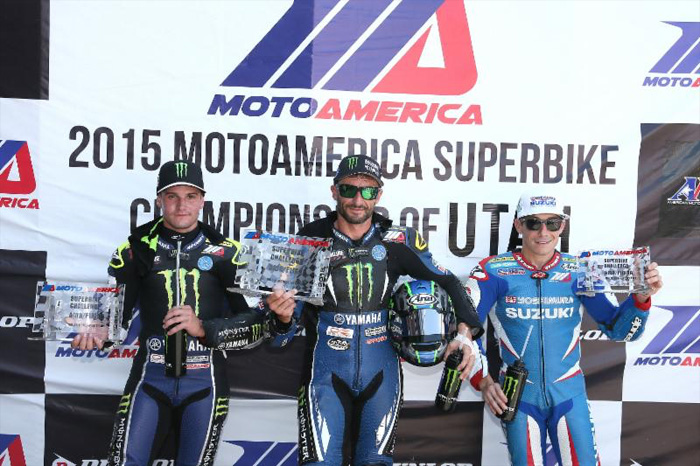 There's hot and then there's hot. And the three hottest riders of the season continued their hot streaks on what was the hottest day of racing thus far in the 2015 MotoAmerica AMA/FIM North American Road Racing Championship with temperatures reaching 100 degrees at Miller Motorsports Park.

Monster Energy/Graves Motorsports Yamaha's Josh Hayes earned his fourth Superbike pole position of the year and the 36th of his career during Superpole on a hot and sunny Saturday afternoon at Miller Motorsports Park.

Hayes lapped at a best of 1:50.494 in the 15-minute Superpole 1 session to best his teammate Cameron Beaubier by .144 of a second. Those two will be joined on the front row by Yoshimura Suzuki's Roger Hayden, the Kentuckian the last rider to lap in the 1:50s.

Row two will be headed by the first of the Superstock 1000 machines - the Aprilia RSV4 ridden by South African Sheridan Morais. Morais ended up with a best of 1:51.134 to narrowly beat out Superstock 1000 Championship leader Jake Gagne on the Roadrace Factory Yamaha R1. Hayden's Yoshimura Suzuki teammate Jake Lewis will complete row two for Sunday's two Superbike races.

"I was a bit surprised to get pole because Cameron (Beaubier) has been able to have just a little bit of pace on me," Hayes said. "It seems like he can put one (a lap) in at will, a few tenths faster than I can go.

"I was just chugging away. I had a couple of good laps going and this one kind of went fairly smooth so I was happy with that. Once I came by and saw that I was P2 and what the time was and I looked at my timer and it matched it.

"I thought I'd try it one more and see if I could do something better. I put one together and it actually was a little bit better and it was enough to get pole. I got to sit in the pits and watch Cam's last lap to see what he was going to do. It feels good to be on pole and I'm looking forward to some fun racing tomorrow."

It was also a day of fours in Utah with JD Beach winning his fourth straight (and sixth overall) Supersport final; Joe Roberts matching that with his fourth straight (and sixth overall) win of the season in the Bazzaz Superstock 600 class; Gage McAllister taking his fourth win in five starts in the KTM RC 390 Cup; and Josh Hayes coming away with his fourth Superbike pole position of the season and the 36th of his illustrious career during Superpole.

Beach, the Yamalube/Y.E.S./Graves Yamaha rider completely dominated the Supersport class on Saturday, the Washingtonian who now calls Kentucky home besting his teammate Garrett Gerloff by 5.567 seconds after a start-to-finish romp to victory on the 3.048-mile outer course. Gerloff was chased home by Wheels in Motion/Motosport.com/Meen Motorsports' Josh Herrin, tthe Georgian closing the gap to a tick under a second after 16 laps .

With 10 races under his belt, Beach now leads Herrin by 19 points in the title chase. Gerloff remains in third, but is 45 points behind his teammate Beach.

"I was able to do some good laps," Beach said after his fourth win a row. "I just have to thank [fellow racer and friend] Hayden Gillim. Since Road America, he actually quit his job so we could train together. We've been training really hard and have been pushing each other.

"He keeps getting faster and faster each weekend and he keeps pushing me on the bicycle and the dirt track bike. It's just been a bit help. The bike was working really good today and I felt really good in the heat and really in front of myself. Garrett (Gerloff) and Josh (Herrin) were going really fast and I know they will be faster tomorrow. We'll have to make some changes and see if we can go a little bit quicker."

Wheels in Motion/Motosport.com/Meen Motorsports' Joe Roberts won his seventh race of the season in the red-flag interrupted Bazzaz Superstock 600 class, the Californian ending up just half a second ahead of HB Racing's Michael Gilbert.

The runner-up finish was not only the first podium of the season for Gilbert, but the first of his AMA pro racing career and it came in a five-lap sprint after the red flag. Bryce Prince finished third on the Tuned Racing Yamaha R6 for his second podium finish in a row and his second of the season.

"Getting those wins down and keeping the streak going is really cool," Roberts said. "It was interesting having a new rider up there battling with me and that's cool. I really love this track and it's one of my favorites that we come to. It's really a rider's track and you have to be super fast and flowing through the corners.

"You can't really treat it like Barber (Motorsports Park) where you're charging the corners all the time. You very much have to keep the flow and keep a cool head when you run here. I love coming here."

NCR Road Race Team's Gage McAllister won his fourth KTM RC 390 Cup race in five starts, the 20-year-old Californian coming out on top of a war for the victory with a lead pack that at times featured 10 riders. McAllister won the sprint to the finish line to beat Justin McWilliams to the line by .048 of a second. The 22-year-old McWilliams, who is in his second year of road racing, was just another .027 of a second ahead of Hayden Schultz on the Hayden Schultz Racing KTM RC 390.

Braeden Ortt and Anthony Mazziotto III, the only rider other than McAllister to score a win this season, were also in the hunt for victory and Mazziotto was just a second behind in fifth place.

McAllister now has a healthy 52-point lead in the debut season of the RC 390 Cup over Schultz, 116-64. Mazziotto is third in the series point standings, eight points behind Schultz.

"It was just enough to get by him right at the line. I got a little lucky in this one, but this racing is a lot more mental than it is physical and you have to put yourself in the right position on the last lap."