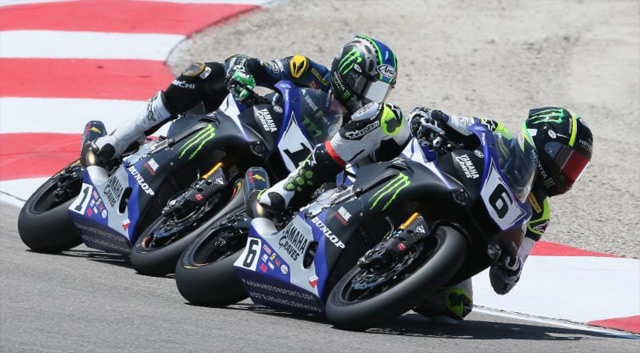 Four points is all that separates the top two riders in the 2015 MotoAmerica AMA/FIM Superbike Championship.

Four points after six rounds, 12 races, 192 laps and 550.568 miles of racing from Texas to Georgia to Virginia to Wisconsin to Alabama and to Utah.

And this coming weekend, July 17-19, the MotoAmerica Series and its five classes comes roaring into California, and the premier Superbike class leads the way with the closest points battle of any of the five title chases.

Josh Hayes and Cameron Beaubier bring their burgeoning rivalry to the Golden State for round seven of the nine-round series at the world-renowned Mazda Raceway Laguna Seca on the picturesque Monterey Peninsula. And one thing is certain: The two Monster Energy/Graves Yamaha teammates will be more determined than ever to make their mark as the MotoAmerica Series shares the weekend with the teams and riders of the World Superbike Championship. The stage doesn't get any bigger than this.

Of the 12 MotoAmerica Superbike races held thus far in 2015, the two factory Yamaha teammates have won all 12. Going into the previous round at Miller Motorsports Park, the pair had earned five wins apiece. But that changed at Miller with Hayes taking both victories to move ahead in the championship - albeit by just four points - with his sixth and seventh wins of the season. Miller marked Hayes' second doubleheader sweep of the season and his first since VIRginia International Raceway in May as the two have mostly ping-ponged back and forth with race wins.

Now the task at hand is Mazda Raceway Laguna Seca, and the 11-turn, 2.238-mile track that doesn't rank as one of Hayes' favorites. Still he comes into this year's race having won four straight Superbike races in Monterey.

"Laguna has always been one of the tougher racetracks for me," Hayes commented. "I was able to pull off a win there last year in front of Cameron [Beaubier], but I feel like the track plays more to Cameron's favor than it does to mine.

"Going in with the points lead gives me a little bit more to work with, but I'm not really thinking about points, quite honestly. If I can just keep myself close in the points as the year goes on, the pressure leans more and more on Cameron. Who do you think is going to feel more pressure, a guy who has four championship trophies at home or a guy who is still trying to get his first one?

"If I miss out on it, I have another year to come back and try it. I'm just going to focus on trying to beat Cam because that's hard enough. If he gets up there and feels like he has something to lose and he's careful, then I'm going to take advantage of that. I'm just going to plug away and go for every win I can as the season goes on."

While the two Yamaha men have an intra-team battle going on for the title, the Yoshimura Suzuki twosome of Jake Lewis and Roger Hayden are even closer in their points battle over third in the standings. Lewis leads Hayden by two points, 171-169, though they trail Hayes by over 70 points, which doesn't sit well with team leader Hayden.

The Kentuckian has been riding hard all season in an effort to try and crack the Yamaha stranglehold on race wins, and he's been second best three times thus far. Hayden has plenty of experience at Laguna - on both AMA and World Superbikes, and even in MotoGP. His first win at the circuit came way back in 2007 in the Supersport class.

Although he's in his rookie season in the Superbike class, Lewis has been impressive with five podium finishes. And he heads to Laguna with favorable memories - the youngster won his first career Daytona SportBike (now Supersport) race there last year.

Spaniard Bernat Martinez continues to hold down fifth in the Superbike Championship, some 23 points clear of Elena Myers. Danny Eslick (a winner at Laguna in 2011 in the Daytona SportBike class), Chris Ulrich (a winner at Laguna in the now defunct 750cc Supersport back in 2001), KTM's Chris Fillmore and OC Racing's Matthew Orange round out the top 10 in the championship heading into Laguna.

Although Superbike is the premier class of the MotoAmerica Series, the racing in the four support classes - Superstock 1000, Supersport, Supertock 600 and the KTM RC 390 Cup - has also been heated.

For starters, the Superstock 1000s (which race on the track at the same time as the Superbikes, but are scored seperately) come to Mazda Raceway Laguna Seca with 17 points separating the top two. Roadrace Factory's Jake Gagne rolls into Laguna with nine wins, but TOBC Racing's Taylor Knapp comes to California with momentum gained at Miller Motorsports Park. Gagne had a crash and a mechanical problem at Miller and he left there with just nine points in his pocket. Knapp, meanwhile, took advantage with second- and third-place finishes to score 36 points on the day.

The two Superstock wins (and 50 points) at Miller, however, went to Westby Racing's Josh Day, ending a run of races where the Floridian scored just 15 points in two rounds (and four races). Day is fifth in the series standings behind Gagne, Knapp, Brit Mark Heckles (who has scored points in each and every round this year) and Californian Tyler O'Hara. Aprilia HSBK Racing's Sheridan Morais is sixth in the standings, but has stood on the podium in five of his six starts since making his series debut at Road America in round four.

The Supersport class ventures to Monterey with JD Beach on fire. Beach and his Yamalube/Y.E.S./Graves Motorsports Yamaha R6 come to Laguna with five straight wins and none were more dominant than the last two at Miller Motorsports Park. Beach has turned what was once a close title chase into a 44-point lead over Wheels in Motion/Motosport.com/Meen Motorsports' Josh Herrin and a 55-point lead over his Graves Yamaha teammate Garrett Gerloff, with those two left scratching their heads as to how to stop Beach's winning streak.

Those three are the only riders to taste victory in the class in 2015 with Beach winning seven races to Herrin's three and Gerloff's lone victory at Road Atlanta.

If Beach is red hot, then so too is Wheels in Motion/Motosport.com/Meen Motorsports' Joe Roberts. The 18-year-old Californian has also won five straight and eight of the 10 Bazzaz Superstock 600 races held thus far in 2015. He leads the title chase over Tizayuca, Mexico's Richie Escalante by 37 points with Las Vegas resident Travis Wyman another 32 points behind in third place.

The KTM RC 390 Cup is now three rounds (and six races) old and one thing has become clear: Gage McAllister has proven to be not only fast, but incredibly consistent. McAllister leads the series with three wins, a third and a fifth in the six races and that translates to a 47-point lead for the 20-year-old Californian.

With that being said, 15-year-old Canadian Braeden Ortt won his first race of the season in race two at Miller to move past Hayden Schultz and into second in the title chase. Anthony Mazziotto III is the third rider in the fledgling series to have tasted victory and the youngster from New Jersey sits fourth in the title chase.

Of Josh Hayes' 55 AMA Superbike victories, four have come at Mazda Raceway Laguna Seca. Hayes is also the only active rider in the Superbike class to have tasted Superbike success at Laguna. Cameron Beaubier, however, has won at Laguna - the 22-year-old Californian winning three Daytona SportBike (now Supersport) finals on the Monterey Peninsula.

Who is the winningest Superbike racer of all time at Mazda Raceway Laguna Seca? Well, that's a tie between retired Australian Mat Mladin and Josh Hayes with four apiece.

The MotoAmerica event at Mazda Raceway Laguna Seca will air on CBS Sports Network on July 26 at 2 p.m. (Eastern) with a re-air coming that same day at 5 p.m. (Eastern).

All five classes at Laguna will be streamed live and can be accessed through MotoAmerica Live.