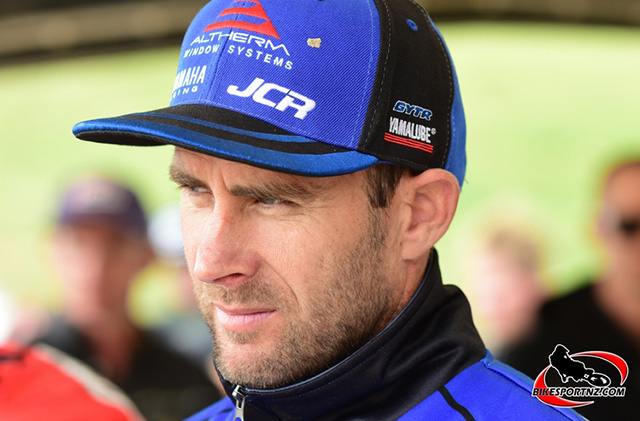 Josh Coppins didn't have the best of it during his wildcard appearance at the Maxxis ACU British Motocross Championships round at the weekend, but he's putting on a brave face nonetheless.

The 40-year-old Yamaha hero is philosophical about how his weekend panned out at Preston Docks, Preston, the seventh round of eight in the British series, a one-off appearance there for the former Grand Prix motocross star.

Coppins took his Altherm JCR Yamaha YZ450F to qualify 11th overall, but then crashed out on lap six of the first of the two points races on Sunday.

"I started eighth in moto one, but on lap two I landed in a hole and my foot slipped of my foot peg and I jammed my back," Coppins explained.

"It hurt a lot. I tried to continue but struggled and eventually crashed and had to stop.

"The track was cool and there were battles going on all over the place in the first few laps, I was loving it so I'm disappointed to finish the weekend like this, and for any fans that came to watch me, but it is what it is."

Coppins' reason for racing this event was to use it as part of his build-up for the Veterans' Motocross World Championships in Glen Helen, California, later in the year and, despite the crash at the weekend, he is still on track to make that bid a reality.

"I didn't expect much (from the racing at the weekend)," said Coppins.

"It was meant to be more of a training exercise to help get in shape for some upcoming events later in the year.

"I am not sure when I will be back on the bike and continue prep for the vets right now. I have a vacation planned and then the focus will be on Courtney (Duncan and her Women's World Championship title bid) and I'll fit in my training after that.

"Last year I finished second (at the world veterans' championships in the United States) and I went 1-2 and got tired in the second race and had a small crash.

"That is why I had decided to race Preston Docks, to prepare better. I am actually doing the 30-year-old class, but I can also do the 40-year-old class, so I will do both and try and win both."