Josh Coppins back in the winners circle 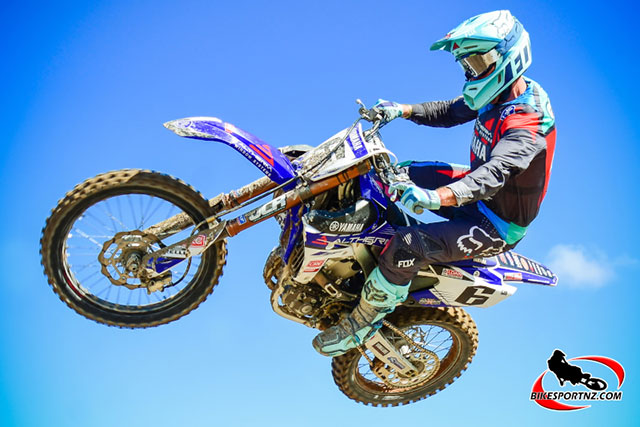 The privilege of rank can be a double-edge sword sometimes, that authority allowing the freedom to indulge oneself on occasion, but it also includes the tyranny of having to take responsibility for the welfare of others.

The "boss" was back in action at the weekend, Coppins showing he wasn't the sort of man who'd ask his riders to do anything he wouldn't or couldn't do himself when he took one of his Altherm JCR Yamaha Racing Team YZ450F bikes out of the truck to indulge in a little racing himself, lining up to tackle the popular annual Golden Nuggets Motocross, at Ikamatua, inland from Greymouth, on New Zealand's South Island's West Coast.

Motueka man Coppins is only an infrequent racer these days. He is typically instead more concerned at most major events with getting the most from his young riders, mentoring them and ensuring they have the tools and support to get the job done on the race track.

But the 39-year-old former world championships Grand Prix star is also not one to shy away from the challenge of riding and he jumped at the opportunity at the weekend.

It was probably a foregone conclusion that he would dominate his races, and with five wins from five starts, as well as winning the all-capacities feature race, he put that well beyond doubt, although modestly down-playing his own performance.

He won the senior King of the Nuggets feature race by a massive 30 seconds from Rangiora's Cody Murphy (Yamaha YZ250F).

"It was more of a family motocross I felt than anything else really," said Coppins.

"I was a chance for me not to have to worry about managing my riders and it gave me a chance to have some fun for myself.

"There were about 350 riders there and it was a good chance for the team to be able to turn up and support other riders.

"The last motocross event I rode was probably the Veterans' World Championships in Glen Helen (in the United States) in November and I also rode a super motard version of this bike at another event recently.

"I felt I rode pretty well and that's good because I have aspirations of also racing a little bit overseas this year. I will be travelling with Otago's Courtney Duncan as she tackles the Women's Motocross World Championships and there will be several opportunities for me to race also at some lesser events."

Main Photo: Josh Coppins who led from start to finish on the West Coast at the weekend.
Credit: Andy McGechan, BikesportNZ.com