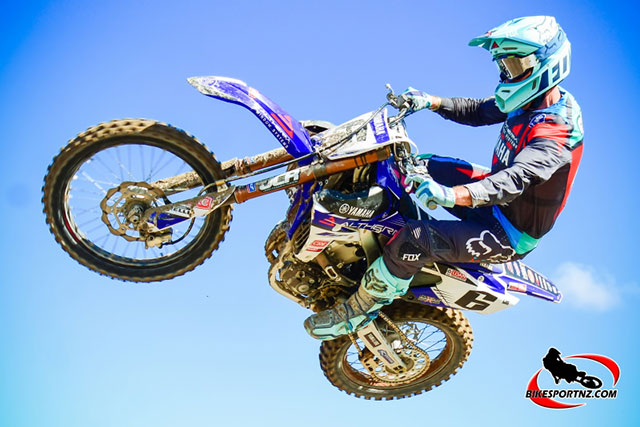 It will be two national championship events for the price of one near Mosgiel this weekend as champions of the past, present and future come out to play at the New Zealand Veterans' and Women's Motocross Championships.

And the Altherm JCR Yamaha Racing Team will have the bases covered. The challenging farmland venue at Scorgie's property, Lee Stream Road, Outram, on State Highway 87, will host the two-day event featuring an entry list that reads like a who's who and who-used-to-be-who of the sport, with Altherm JCR Yamaha Racing Team riders Courtney Duncan and Josh Coppins clear favourites to win their respective classes.

Aside from world championship contender Duncan, several of the riders who are expected to shine among the women include Cambridge's Sandra Hannon, Motueka's Katie Silcock, Opunake's Taylar Rampton and Eketahuna pair Letitia and Courtney Alabaster, all of them in hot form at recent events.

The 20-year-old Duncan raced the Women's World Motocross Championships (WMX) earlier this year, where she was incredibly unlucky not to claim her first world title at her first attempt.

She instead had to settle for a world ranking of No.5 after an errant photographer on the track caused her to crash out of the German GP in May.

Her injuries from that unfortunate incident meant she was sidelined for the rest of that weekend and for a further two of the rounds that followed.

Duncan, from Palmerston, returned to racing and won the weekend at the seventh and final round at Assen, in The Netherlands, in August.

She won five of the 14 races in the WMX series this year ‰ÛÒ although only being able to start in nine of them ‰ÛÒ and that race win tally was greater than any other rider, including the woman eventually crowned world champion, France's Livia Lancelot.

This weekend at Mosgiel will be just another phase in Duncan's build-up for the start of the 2017 Women's Motocross World Championships, set to kick off in Indonesia on March 5.

Such is the calibre of Duncan that it is unlikely that 2015 women's champion Letitia Alabaster, or anyone else for that matter, will even get close to threatening Duncan at Mosgiel.

Coppins is the clear favourite to win his class, with the 39-year-old just four years into his retirement from fulltime international competition. Coppins is the manager of the Altherm JCR Yamaha Racing Team and he would like nothing better than to add two more trophies to the team cabinet. "Obviously, Courtney and I would like to win both our classes," said Coppins.

"It's also a good opportunity for Courtney to race locally and for her family to visit and see her race, an opportunity that is becoming more rare for them these days with Courtney overseas so much.

"Also, this will also be the last hit-out for me before I tackle the Veteran's Motocross World Championships at Glen Helen, in California (on November 5-6)." However, even if Coppins, Rowe, Wadsworth and Heaphy produce some of their best form in the veterans' races, they will have to be aware of hot performances coming from other top riders at Mosgiel, men such as the perennial frontrunners from Taranaki, Larry Blair, Greg Ngeru and David Furze, Whanganui's Danny Willemsen, Winton‰Ûªs Martin Axtens and Tokoroa‰Ûªs Tony Livingstone to name a few.