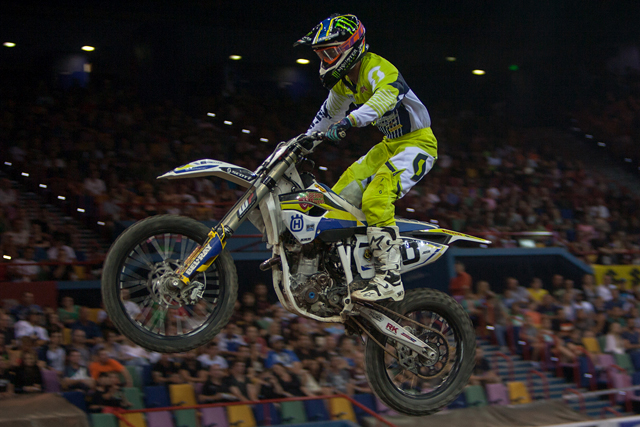 Husqvarna Motocross Racing Team racers Josh Cachia and Ryan Marmont have saved their best for last, both leap-frogging several championship positions at final round of the Australian Supercross Championship which took place inside the Boondall Entertainment Centre on Saturday night.

Both adapted well in the championship‰Ûªs return to indoor racing and revelled under the bright lighting, with the team‰Ûªs SX1 competitor Josh Cachia powering his nimble Husqvarna FC 350 to a season-best result of sixth in the premier class final.

The result elevated him from eighth to sixth in the championship.

‰ÛÏIt was good fun and a good result to end the Supercross season with." Cachia stated. "I got a third and a win in my heats, and was feeling very confident going into the final.

"I got a good start in the final, but over-jumped a triple and tweaked my wrist, so that kind held me back. "I came into this round wanting to go up a couple of places in the championship, and that's exactly what I've done so I‰Ûªm pretty happy.

"My previous indoor experience was useful here, just dealing with the conditions that other riders might not have seen before, how the track is going to turn out, or what kind of lines you need to cover, you've got to tweak your riding style a little bit.

"Ando has been great." Cachia added. "He's only asked 110% of me, but he doesn't care if I come last or whatever, and he's been happy with me every round.‰Û 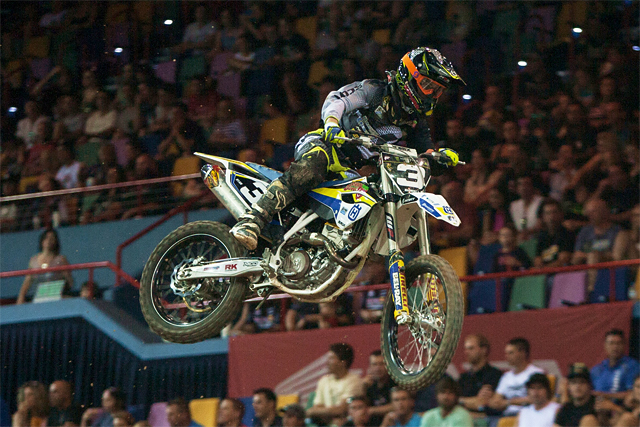 Ryan Marmont shot out of the blocks to lead the opening laps of the SX2 main
In the SX2 class competitor Ryan Marmont proved a poor qualifying can sometimes mean nothing at all, gaining a near-holeshot on the back of a Last Chance Qualifier entry and twelfth and final pick of the start date.

Marmont blasted his FC 250 into the lead several laps in and looked like going on to win the event, but tucked the front end over an unseen rock and crashed. He pushed on tenaciously however, and was rewarded with sixth in the final, which elevated him three championship positions.

‰ÛÏI was able to call on plenty of experience from over years of indoor races - I had a game plan, that was obviously to qualify good, ride good heats and get good results, earn a good gate pick on the inside for the main," Marmont explained.

"Unfortunately, I didn't do any of that. I got terrible starts, put myself in bad positions, had crashes in heats, ended up in the LCQ and got the last gate pick so it couldn't have gone any worse!

"Then in the main, I just about pulled the holeshot from gate 12 - which was a neat enough trick on its own - got to the lead, and unfortunately just had a little slip up when I hit what I think was a rock on the way into a turn. I went down unexpectedly and so fast I didn't even get to put my hands out.

"But I got back up, and rode a solid second half and I'm happy that I finished the season riding the way I wanted to ride, it's just a shame it didn't show in the results as much as it should have.‰Û