Josh Brookes Delivers A Double As Battle For The Showdown Intensifies 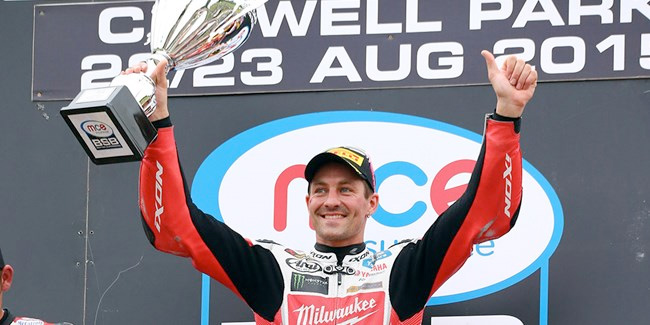 Milwaukee Yamaha's Josh Brookes continued his winning streak in the MCE Insurance British Superbike Championship by celebrating the opening race victory of the day at Cadwell Park following an intense opener in Lincolnshire.

The race got underway with Brookes instantly hitting the front of the pack, launching from his pole position to lead Luke Mossey, Peter Hickman, Tommy Bridewell and Danny Buchan. As Be Wiser Kawasaki's Buchan bid to make up ground after losing positions at the start of the race, the 22-year-old crashed out at the top of the Mountain on the eighth lap.

Buchan's stricken Be Wiser Kawasaki prompted a brief Safety Car intervention and when the lights went out on the Nissan GT-R to resume the race Brookes was ready to try and make a break. Billy McConnell though seized his opportunity as the Smiths Racing BMW rider hit the top five after making a move on Bridewell at Coppice.

Hickman, Mossey, McConnell, Bridewell and Michael Laverty with Shane 'Shakey' Byrne also in close contention, then had to scrap it out for the final podium positions as Brookes made marginal gains to edge ahead at the front.

McConnell was fired up and on the penultimate lap he made a move on Mossey at Park corner, the move pushed the Quattro Plant Kawasaki rider wide and the Tyco BMWs took full advantage to move ahead too.

Bridewell then had McConnell in his sights and he made a decisive move at Coppice on the final lap to move third. The Australian though wasn't prepared to give up without a fight and he was trying every move in his power to reclaim the final podium position. It came down to an incredible move from McConnell at the bottom of the Mountain to push himself back ahead of the Tyco BMW and he then defended hard through the Woodlands section to claim his first podium finish behind Brookes and Hickman.

"I worked really hard at the start of the race to make a gap and then I saw the Safety Car come out and I knew I had to get back on the gas straight away and make the gap again." Brookes said. "I always ride better on my own smooth lines and I just wanted to stay ahead.

"We have bridged the podium point gap on Shakey to just one point now and it is a credit to the team. Five wins in a row is down to the team effort - the bike feels like an extension of my body at the moment! I am sure it appears easy but it isn't! You're out there racing for everything and I am pleased to keep the winning streak going, so hopefully we can do the same in race two!"

Bridewell was forced to settle for fourth ahead of his Tyco BMW team-mate Laverty with Byrne climbing to sixth ahead of Mossey. Richard Cooper was the leading Buildbase BMW on his debut with the team ahead of Christian Iddon who battled into the top ten and Dan Linfoot on the Honda Racing Fireblade. They narrowly finished ahead of Team WD-40 Kawasaki's Jack Kennedy who fought on to eleventh despite fractured his fibula in warm up this morning.

Milwaukee Yamaha's Josh Brookes delivered an impressive second victory at Cadwell Park edging out his MCE British Superbike Championship title rivals to extend his points advantage in the overall standings and move ahead of Shane 'Shakey' Byrne in the Podium Points tally. The battle to be inside the top six has also intensified with just three races at Oulton Park now remaining before the Showdown.

Brookes maintained his incredible pace in race two and he instantly hit the front of the pack on the opening lap with Luke Mossey, Peter Hickman and Byrne in close contention.

The rider on the attack though was Tommy Bridewell after he was denied a podium finish in the opening race on the final lap. The Tyco BMW rider was pushing the defending champion hard and he made a calculated move at Park corner on the fourth lap to move into fourth position.

Mossey in second place was equally coming under pressure from home hero Hickman and the Quattro Plant Kawasaki rider made an error into the Chicane, running on and then rejoined but dropped back to third and then was passed by Bridewell at Coppice a lap later.

The second Tyco BMW of Michael Laverty had been closing in, but on the twelfth lap he slid out of contention at the Chicane, leaving Hickman, Bridewell, Mossey and Byrne to battle for the final two podium positions.

Bridewell was fired up for another move and a lap later he pushed ahead of Hickman at Park to hit second place, however the RAF Reserves BMW rider wasn't going to give up on second place without a fight to the finish. Hickman retaliated on the final lap at the Chicane to reclaim the position with the pair still able to keep a closing Byrne at bay as he failed to finish on the podium for the first time this season.

Mossey held on to fifth despite the best efforts of race one podium finisher Billy McConnell's best efforts to snatch the position. Richard Cooper improved to seventh on the leading Buildbase BMW whilst Danny Buchan, James Westmoreland and Dan Linfoot completed the top ten.

"I am sorry I just went out the front and led the whole race, but I just wanted to get out there and not let up and keep going." Brookes said. "It is easy to make mistakes and lose concentration when you are not in a battle.

"In a battle you are fighting for every corner so you don't lose concentration, so I wanted to be smooth and calculated so I kept it pinned and rode it to the flag. I am really pleased for the Milwaukee Yamaha team and everything is all working really well now so we are ready for Oulton Park!"